MUGWE: Raila’s welfare programme for the unemployed is a cobra effect

The ODM leader is promising to rob Peter to pay Paul.

• They increase the net value of being in the condition that initially prompted the cash transfer. 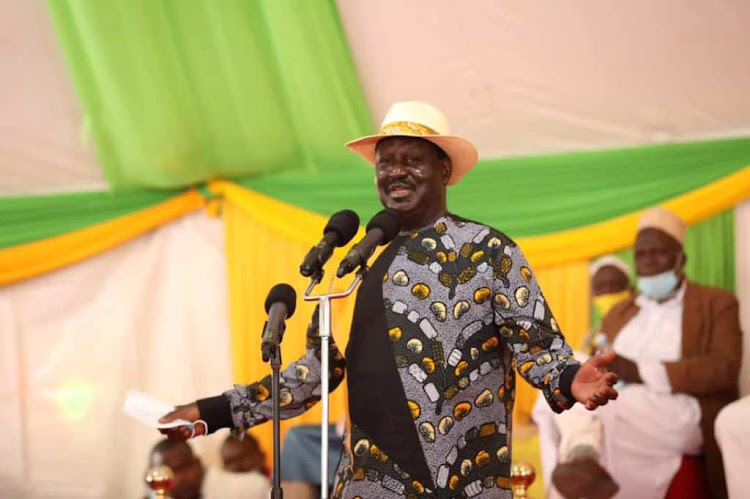 In the reign of British Raj of colonial India, the government of Delhi found that there were too many cobras in the capital city.

As a solution to prevent the deaths of British imperialists from these venomous serpents, the British hatched what they thought was a brilliant strategy to curb the huge cobra population.

They launched a bounty programme where citizens were rewarded with cash for each dead cobra they brought into the government bounty facilities.  Initially, this programme worked like gangbusters and appeared highly successful. Many rewards were claimed and the number of cobra snakes spotted in Delhi started to decrease. The result was lots of dead cobras.

Problem solved…or so the British thought!

The success was short lived. Soon after, the number of cobra snakes presented to the bounty offices for the reward kept on increasing. Upon further investigation, the British imperialists discovered there were many enterprising Indian locals who started breeding cobras to make more money.

The British realised their folly and scrapped the programme. Without the bounty rewards, the locals who were breeding the cobras released the now worthless serpents back into the city, leading to a higher cobra population than before the snake bounty was introduced.

This has since been known as the cobra effect. This effect occurs when incentives designed to solve a problem actually make it even worse, resulting in negative unintended consequences. It is a fix that fails.

Back home, we are in the season of election campaign promises. Campaign promises in and of themselves, are a cornerstone of representative democracies. Aspiring politicians use them to signal to voters their intentions once they ascend to political office, in a bid to woo them to vote for them. These promises tend to have a polarizing effect on voters opinions of politicians. They can attract similarly-positioned voters, while strongly repelling voters who disagree with the candidate’s position.

One of those campaign promises has been by ODM leader Raila Odinga. He is on public record pledging that should he become the president in next year’s general election, all the youth in Kenya will get employment, and a monthly stipend of Sh6,000 will be given to two million of the poorest households and unemployed youth .

In his reasoning, Raila said this mitigation measure will go a long way in improving the livelihoods of the millions of unemployed youth and people. His campaign promise was to make Kenya a welfare state.

Many of his critics and those skeptical to the pragmatism of this campaign promise have questioned how it will be sustainably funded, seeing as we have a struggling economy.

But I posit that we are asking the wrong question. The focus should not be on where the money to fund this programme will come from. Neither should the argument be that, if we stopped the daily theft of Sh2 billion, then we can sustain this fairy tale promise. The question we should ask is ‘has Raila unleashed the cobra effect on the unemployed in this country?’

I am not a politician, so I pose no existential threat to Raila’s pursuit of the throne.

Now that we have established that, I invite him and his political advisers for a candid economic conversation. And should they be impatient to listen to the end, the short answer to the question of whether their approach is effective, is that it is not.

Here is the simple reason. The Bible teaches us in Proverbs 30:16 that there are four things that are never satisfied. These are the grave, the barren womb, the thirsty desert and the blazing fire. Economic experts have analyzed and proposed that a fifth one be added - welfare.

To put this into context, welfare programmes on poverty in the US ballooned from $107 billion to $688 billion by 2015. This was a 640 per cent growth. In total, $19 trillion has been spent on these welfare programs but the poverty problem still persists.

Raila is proposing to underwrite the unemployment menace through welfare. This welfare approach is economically unsound on so many levels. Allow me to explain the unseen icebergs that are likely to sink this ship.

A man is only unemployed when he is both not working and also desires to work. Unemployment rate is the share of the labour force that is jobless. In economic-speak, it is not everyone that is without a job that is considered unemployed. And this is what Raila is not disclosing to the voters.

Unemployed people are those who are willing, able, available to work, and are actively seeking for work. Many people who would like to work but cannot, for example, due to a disability or infirmity, or who have become discouraged after looking for work without success, and hence have ceased actively looking for work, are not considered unemployed. So they do not form part of the unemployment rate.

Going by this definition, there will be a high number of disillusioned voters who will not receive the promised stipend because they do not fall in this category of the unemployed.

Like the cobra effect, welfare programmes largely produce unintended rewards. They increase the net value of being in the condition that initially prompted the cash transfer. When incentives of being on welfare rise, more people desire to be part of the programme. Both welfare recipients and decisionmakers often have incentives to overstate the need in order to extend the benefits to themselves as long as they possibly can.

The Sh6,000 being offered by Raila is a conditional offer; that of being unemployed. With such an incentive, it should be expected that anyone earning less than this offer will be motivated to stop working, sit home and wait for the government stipend.

After all, why work when the government is paying you not to work? And in some cases, the government stipend will pay you more than you would earn if you were employed.

So rather than reduce the number of the unemployed, like the cobra effect, even those that have a job that pays less than, or just slightly higher the government stipend, will quit to benefit from this welfare money. This will have a huge impact on the productivity in the country in all sectors.

And just like that, rather than reduce the number of people needing the stipend, the number of unemployed people will voluntarily continue increasing because there will be an incentive not to be employed.

One of the most elementary indicators of a nation’s prosperity is determined in part by the quantity and quality of labor and capital. These are factors of production which when combined generate national income.

I, therefore, submit that Raila is perpetuating Robin Hood economics because government does not have its own money, but relies on the tax revenue that it collects from the generated national income derived through the combination of labour and capital. He is promising to rob Peter to pay Paul.

Naturally, Peter’s productivity will decline because he no longer has the incentive to work hard only for his yield to be forcefully appropriated to Paul.

And the more employed people opt for unemployment to receive the Government stipend, the fewer there are Peters to rob from, and the more the resources required to pay the Pauls not in employment. Eventually, an inverted pyramid is created where you have more dependants than producers.

Finally, my unsolicited advice is to Wanjiku: When something occurs once, it is happenstance; twice its coincidence; and thrice its enemy action.

Likewise, how many failed election campaigns pledges have you been promised in your lifetime? When will you slap enough adult into yourself and admit that we are way past coincidence?

Raila: How Sh6,000 monthly stipend will be rolled out

Targets poorest households, says nobody should lie to Kenyans that taxes would have to rise for this to be realised.
News
1 month ago
by SUSAN MUGWE Political Economist
Siasa
16 October 2021 - 05:00