Taking children back to school in this Covid-19 era of short school terms and soaring prices is stressful, nerve-wrecking.

• Time has come for Kenyans to step up and demand that government does better in managing the economy.

• Besides calling for lowering of prices of commodities, the government must also subsidise school fees for public and private schools. 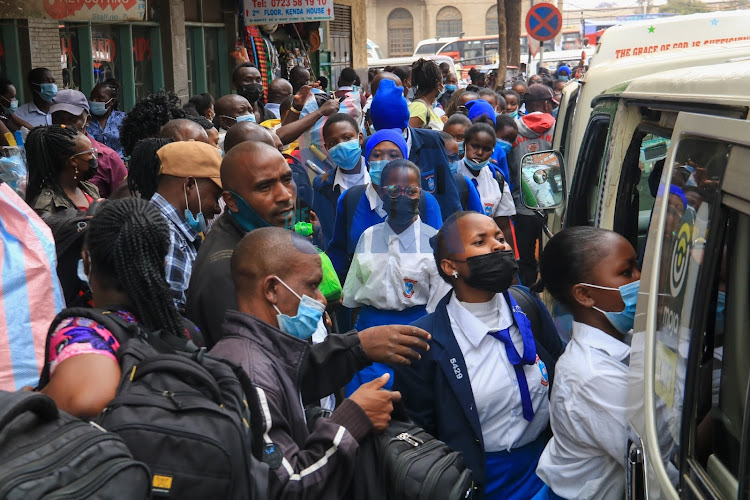 Thirteen-year-old girl Sumaiya from Mombasa went back to school on Tuesday at Star Sheikh School in Athi River. This will be the second term of her final primary school year.

In search of better grades, she had to travel hundreds of kilometres and incur extra expenses to give herself a chance. From an early age, she is learning that life in Kenya is hard and becomes harder each ana every passing day.

Like hundreds of thousands of other children in Kenya, Sumaiya returned to school this week amidst the economic uncertainty.

Due to increase in fuel hikes, her transport back to school this term was almost double what she paid when she reported for her first term, barely three months ago.

Being a boarding school, she had to buy basic items for use such as toiletries. These, too, have shot up and the same amount of money her mother used during the first term now barely buys just over a half of what Sumaiya needs.

Everywhere you look, Kenyans are struggling to make ends meet. It is shocking how in just a few months, the cost of living has gone up so high. Taking children back to school in this Covid-19 era of short school terms and soaring prices is stressful and nerve-wrecking.

While the government is right to insist that all children must be in school, it is failing on its part to facilitate a conducive economic environment to enable parents meet the needs of their children’s education.

Free primary and secondary education is not truly free in Kenya. The cost extends beyond school fees. To begin with, the government has diluted public schools’ performance by not expanding facilities and increasing number of teachers.

The ratio of facilities and teachers to students has lost balance, leading to poor performance in public schools. This has led many parents to now consider the costly private schools to get their children a decent education.

Second, there is the issue of school fees. Whether in private or public schools, parents now have to pay fees every two to three months without a break to recover.

Even before one has cleared the fees for the previous term, the new term has begun and more money has to be paid. This is happening at a time when unemployment is at an all-time high with many Kenyans having lost their jobs and businesses due to the Covid-19 pandemic.

Where are parents expected to get the money to pay for the frequent fees?

Third, there is the issue of basic costs, including transport, stationery and food. Whether day-scholars who cover short distances daily or those who board but have to travel long distances once in a while, the cost of transport in Kenya presently is unbearable.

Further, the increase in fuel prices has led to an increase in basic commodities, including stationery.

With the new curriculum requiring each child to have their own books, it means for those from poor families, they can only watch in class as their colleagues study, which is heartbreaking.

Fourth, the rising poverty levels mean families cannot put food on the table at the end of the day. Many children go to school hungry and spend the whole day without food.

One can only imagine what it feels to a parent to see his or her child going to sleep hungry and knowing that come morning, he or she will still not have even a slice of bread to offer the child. It is little wonder the police recently announced alarming rates of suicide cases in the country. Life is becoming excruciating to many Kenyans.

Time has come for Kenyans to step up and demand that government does better in managing the economy. Besides calling for lowering of prices of commodities, the government must also subsidise school fees for public and private schools.

For starters, instead of paying politicians the millions they get every month, part of this money should be temporarily diverted to support parents with schooling. Desperate times call for desperate measures and this time, leaders must sacrifice for their people.