There is no doubt that it is time for the 13 million strong population to demand that their vote will only go to the people who have a credible plan for reviving the industries.

• When it comes to the politics of sugar and the collapse of the industries in Western Kenya it’s a long story of contradictions and many schools of thought.

• Just how did a sector that fed an entire region of many ethnic communities go down with a thud? 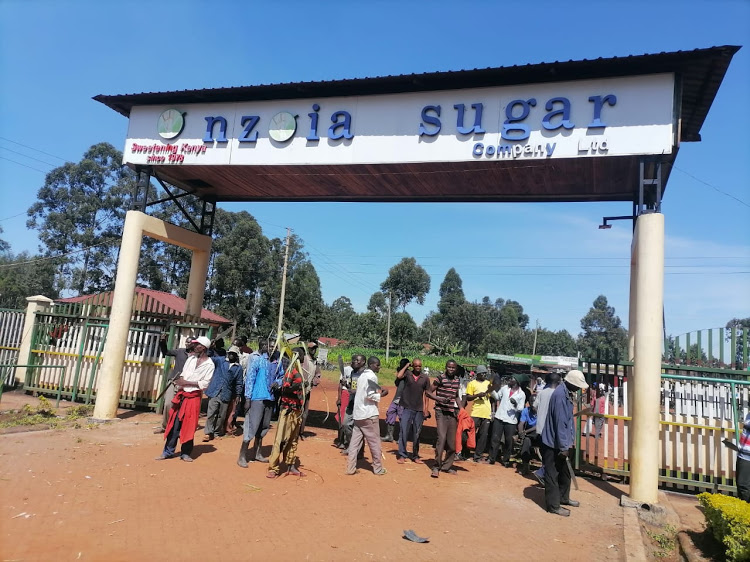 Cane farmers during a past demo at Nzoia Sugar Company
Image: JOHN NALIANYA

It is the silly season of campaign promises and utopic economic models.

From now until the 2022 General Election, there are candidates who will promise to build nine stadia within three months, take the country straight to the level of Asian Tigers in one year, or launch a new education curriculum that churns out a genius per second, until we the citizens say “enough!”

It’s all part of regular campaigning in this land.

But there are regions of this country for which this is a matter of life and death. I grew up in one such region, within the sugar belt that starts in Muhoroni and goes all the way to Bungoma, on the western edge of the country.

It is not an exaggeration to say that in the 1980s, when my generation grew up, every homestead in Nyanza and Western provinces had at least one person working for one of the many sugar factories that dotted the land.

The factories were the economic mainstay of the region, and those who did not work in these sugar mills were probably involved in planting sugarcane as contracted outgrowers of the mills.

Many trading centres neighbouring the plants such as Oduwo, Oseng’ or “Round” near the Muhoroni and Chemelil factories, or Nandolia, Mechimeru, Mwibale and Sudi around Nzoia Sugar Factory, just to name but a few, relied almost entirely on these plants.

A recent visit shows many of these trading centres have practically disappeared, following the collapse of the factories. In certain countries, this would be classified as economic genocide.

The 1980s were the years one could stand anywhere on the Nyando Sugarbelt, scan the landscape and see smoke in the distance emanating from the boilers of the sugar factories. Life was good, and should have remained so.

When it comes to the politics of sugar and the collapse of the industries in Western Kenya, depending on whom you talk to, it’s a long story of contradictions and many schools of thought.

Just how did a sector that fed an entire region of many ethnic communities go down with a thud?

One school of thought has it that an unfavourable tax regime makes manufacturing a tall order in the Kenyan production enterprise. Indeed, in the case of Muhoroni Sugar Company, its problems were compounded by a KRA claim for nearly Sh900 million in taxes.

The concept of a statutory tax agency running a state institution out of town because of a tax claim is difficult to understand.

Another common line is that most of the mills are ancient, and thus not efficient enough to produce sugar at competitive levels. It is said the cost of producing sugar in Kenya is

upto three times that of Brazil, and twice that of many Comesa countries.

Beyond the age of most of milling plants for Kenyan, there could be a multiplicity of factors right from planting at the farm to the factory. However, once Kenyan sugar became that expensive to produce, you couldn’t escape the arrival of cheap imports into the country from places where it is cheaper to produce. And this is where the politics comes in.

The Western region is generally a graveyard of dead industries that have nothing to do with sugar. The collapse of the Kisumu Cotton Mills killed the vibrant textile industry and cotton-growing in most of Nyanza. Further up in Bungoma county, the celebrated Panpaper Mills went down with many livelihoods. The despondency created by these collapses is beyond description.

One of the reasons people from this region consistently push for one of their own to become president is the belief that one would have to have walked in their shoes to understand the true nature of what this industrial graveyard represents to the residents.

Every election season, aspirants and political tourists landing in the Western region predictably promise to resurrect the factories. Except none has ever said how, and it is possible that after these pilgrimages, none remembers the promises made and the follow up required to implement such promises.

For a long time, the marginalisation of Western Kenya by subsequent regimes has created the feeling that whereas coffee and tea farmers have had debts written off and subsidies extended to them, the sugar can farmer remains the neglected of the farming community.

In recent times, leaders from the Mt Kenya region have met several times and released what they consider their irreducible minimum in seeking pre-election coalitions. Even though the media is more prone to reporting mostly the political aspects of these demands, there have certainly been about their economic wellbeing.

There is no doubt that it is time for the 13 million strong population of the Western region to demand that their vote will only go to the people who have a credible plan for reviving the industries.

I am not by any stretch referring to the political noise around economic models whose owner struggle to explain attendant concepts in a language that even more elite listeners will understand. I am referring to written covenants where the candidate shows the plan, the methodology of raising funds for the revival, the envisaged revenue levels and the elephant in the room; a return to profitability and restoration of acceptable employment levels in the plants.

industries. Sugar companies such as Muhoroni, Nzoia, Miwani, Mumias and Sony hold huge tracts of land that were the nucleus cane estates. Like all land matters in the country, these too are sensitive issues that elected leaders and government technocrats prefer to sweep under the carpet, hoping someone else along the years will deal with them.

A quick glance today will show that sections of these vast lands have crops growing in them which have nothing to do with sugarcane, an early sign of encroachment.

But given the passionate feelings of local communities around these plants, the land alone could be a trigger to future conflict, if the revival of these factories fails to take place.

For once, the people of the West can demand their dignity back by asking every aspirant visiting their land to not just pass by as part of rallies happening everywhere, but sit down and explain how the region will rise from the ashes of economic doom, and restore their standing to the level of other taxpayers in the country.

If they don’t show presidential candidates that it is not business as usual anymore, another regime will come and go, and the factories will sink further with the land remaining as a source of future conflict.

This election cycle should be the last any candidate makes a promise to revive the industries, and the promise has to be fulfilled.

Receiver management in the process of identifying an investor to revive the company.
News
1 year ago

Bill has been before the National Assembly for the last eight months.
Counties
1 year ago
Post a comment
WATCH: The latest videos from the Star
by COLLINS AJUOK
Siasa
01 October 2021 - 05:00
Read The E-Paper