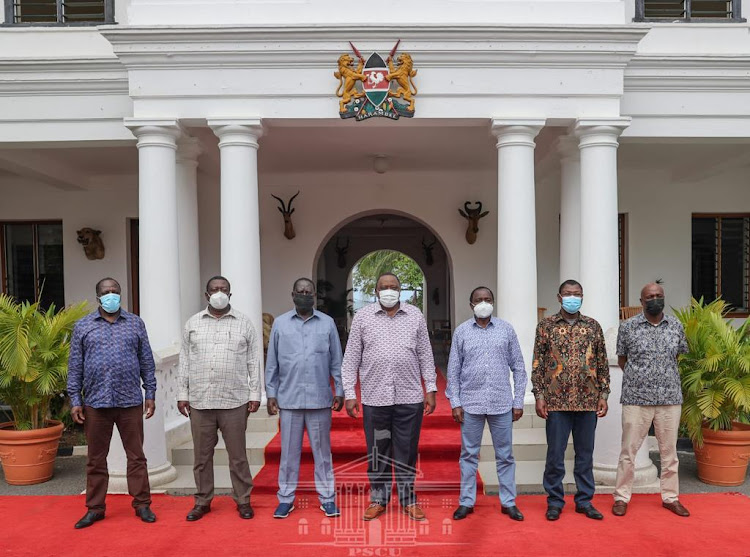 The country’s main political bigwigs are facing splitting headaches over 2022 plans as hardliners in their camps push for their presidential candidature.

It has also emerged Deputy President William Ruto’s hustler nation is sitting on a time bomb as key allies in his United Democratic Alliance battle over tickets.

Despite the DP repeatedly denying he plays favourites for tickets, there are growing concerns the Jubilee ghosts of sham nominations in 2017 could return to haunt him.

For instance, Ruto is under pressure from allies and MPs pushing for direct tickets in the 2022 General Election, threatening to trigger an implosion.

They claim they have paid the highest price of state intimidation and harassment for standing with him following an onslaught from the government.

The DP’s main opponents, including Wiper boss Kalonzo Musyoka and Amani National Congress leader Musalia Mudavadi are also on the horns of a dilemma over their 2022 presidential plans.

Their close confidants are pushing them to throw their hats in the presidential ring next year against Ruto and ODM boss Raila Odinga.

They initially worked with Raila in the 2017 presidential polls but fell out over trust issues, leading to the collapse of what was once their Nasa juggernaut.

Former Kajiado North MP Moses ole Sakuda told the Star that Kalonzo and Mudavadi are in a difficult position with limited options ahead of the polls.

The Uhuru ally said the two leaders are under immense pressure from allies insisting they must run for president.

“I don’t think they have clear chances of winning but it appears  allies are keen on also riding on their candidature to win seats,” the former MP said.

The ODM party is pushing Raila to name running mate from the region.
News
2 months ago

Sakuda, a Jubilee stalwart, said the DP's camp will face difficulties in dealing with most dedicated allies seeking 2022 tickets.

The Deputy President has said the nominations will be free and fair.

“It is not going to be a walk in the park as we head into the elections because some are likely to quit UDA over nomination issues. Some feel entitled to direct tickets because they stood with their patron," he said.

Although analysts have concluded the presidential contest would be a two-horse race between Ruto and Raila, Kalonzo and Mudavadi's confidants say they have a fighting chance.

Faced with losing their loyal backyards that have supported them for years, Kalonzo and Mudavadi are deciding whether or not to throw their hats into the ring.

On Thursday, Jubilee nominated MP Maina Kamanda told the Star that Mudavadi and Kalonzo are facing "unnecessary" pressure from hardliners to go for the top seat.

“For a long time, I have said it is time the two leaders decided on their political future without yielding to pressure from selfish allies. I know that if they thought out, they would not run for president," Kamanda said.

The veteran Nairobi legislator said their allies are only pushing for their selfish political survival without looking at the bigger picture and the odds of victory.

“They should stop listening to their allies who are feeling a lot of heat from their opponents and support Raila Odinga as he looks like the clear winner," Kamanda said.

He went on, “They should not try to isolate themselves when the people of Mt Kenya have decided to support Baba [Raila]. "

Already, Kalonzo is facing threats of being abandoned by his Ukambani confidants who have declared that they will not back him if he does not run for president.

The pressure from his allies is said to have forced him to play hard.

In a harsh statement at Parliament Buildings last week, Wiper MPs led by Kitui Senator Enoch Wambua warned Kalonzo against supporting Raila for a third time and running as his deputy.

They said he would be a lonely man on such a journey without the support of his Ukambani political base, which has rallied behind him for decades.

“Should our party leader ever decide to support the Rt Hon Raila Amolo Odinga for the presidency, we respectfully assure him of two very painful outcomes,” they said in a statement read by Wambua.

He said Kalonzo's Kamba community and other supporters across the country will "never forgive him.

The former vice president has resisted the push to cede ground and reunite with Raila to bolster their chances of defeating Ruto, saying he can no longer play second fiddle.

In June, Kalonzo said he would not support Raila again in 2022 as that would make him "the most stupid fellow on earth".

OKA chiefs walk a tightrope on how to deal with mounting rebellion within their camps.
News
3 months ago

“As of now, it is unthinkable that I, Stephen Kalonzo Musyoka, would support Raila Odinga for the third time…a presidential candidate without a measure of reciprocity,” the Wiper leader said.

There are fears that should Kalonzo back Raila, some of his allies in Ukambani seeking elective seats will find it hard going due to a diminished Wiper wave.

It is the same in the ANC camp where Mudavadi’s troops have also warned him against sacrificing his 2022 presidential ambitions in support of anyone else.

Kakamega Senator Cleopas Malala has strongly urged Musalia to go all the way to the ballot or risk losing support in the Luyha nation.

"I remind you (Mudavadi) that you're carrying the responsibility of our community on your shoulders. Don't think you'll just cede your presidential ambitions. We have decided you must be on the ballot. If you cede your ambitious, I'll lead our people in abandoning you." Malala recently threatened.

As Kalonzo and Mudavadi walk a tightrope, Ruto is also under fire in his camp as some politicians accuse him of favouring sitting MPs and certain candidates.

The DP has been forced to deny allegations has declared support for candidates, especially those eyeing gubernatorial seats through UDA.

The DP is said to have endorsed Senator Irungu Kang’ata  for the Murang’a governorship), Susan Kihika (Nakuru) and Edward Muriu (Gatanga MP) in a meeting at his Karen residence.

The perceived endorsements sparked fury and fear among his other allies, especially from Mt Kenya. They claimed that playing favourites would trigger chaos in UDA, like that in the Jubilee Party.

This forced a group section of Murang'a aspirants to take on the DP over the supposed endorsements, warning that they would ditch UDA if they are not assured of free and fair nominations.

“We find this unacceptable, undemocratic and a subversion of the will of UDA supporters. We are equally concerned such a move is only perpetrated in the Mt Kenya region,” aspirant Kahio Ngomo said.

Before his perceived endorsement, DP Ruto had promised UDA politicians that flagbearers in the general election will be determined by voters in a free and fair process and that he would not interfere.

Gideon setback as Chepkut, others rush to Ruto