• Research shows applicants who are honest and reveal convictions may be able to convince an employer that the convictions is not relevant to the job.

• Also employers are less likely to reject an applicant, if they learn about convictions only after they have assessed the applicant. 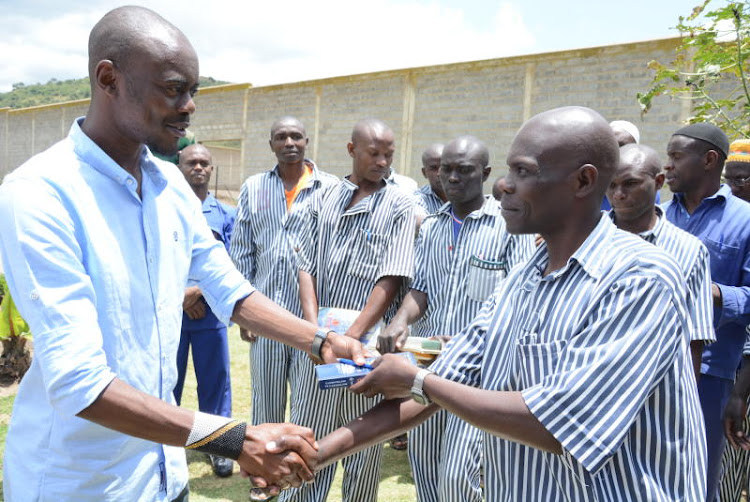 Viwandani MCA Eric Gichuki with inmates at Naivasha GK prison which has over 3,000 inmates. The prisoners have welcomed a court directive that inmates who have served two thirds of their jail terms be released.
Image: GEORGE MURAGE

“The new Constitution changed prisons from places of punishment to places of correction. That a person who has finished his or her prison term, upon satisfaction by officers who supervise the term, must come out with a certificate of good conduct saying: ‘We have rehabilitated this person and he or she is fit and clean to join society and be productive like everybody else'.

"That way, they will not come out and the only other occupation is to revert to crime because that is the only thing they can do.” This was Senator Moses Wetang’ula in 2019.

It does not seem to have led to any changes in the law. Now, there is a petition before the National Assembly asking for law to prevent employers demanding police certificates of good conduct (meaning no conviction).

The argument adds: Some convictions are the product of youthful misguidedness, and should not act as an obstacle for the rest of the person’s life. And some people are innocent but wrongly convicted – maybe pleading guilty on the basis of misguided advice, while some suffer from inability to hire a lawyer.

It would be naïve to say convictions should always be left in the past. People do re-offend. A 2014 Kenya National Bureau of Statistics report said that of 77,000 convicted prisoners in Kenya’s jails, 22,000 or so had previous convictions. Would you entirely blame a shopkeeper who declines to employ to work at a till a person convicted of stealing from the till in a previous job?

On the other hand, some research suggests that a major cause of recidivism is inability to get a job and general rejection by society.

Of course we also get calls for a register of sex offenders, precisely to stop those who have been convicted particularly of sexual activity with children getting jobs working with children.

Article 27 prohibits discrimination against anyone on 17 specific grounds, including ethnicity, sex, disability and religion but not “criminal record”. But it does say “including” these 17 grounds – in other words they are not all.

But how do you decide what other grounds for treating people differently count as “discrimination” under Article 27? Should the additional grounds be somehow similar to those listed in Article 27? Some of those listed grounds are things that people have no say over – like race or disability. But some are characteristics over which people do have some say, like religious or other belief, dress – or pregnancy, or marital status.

A majority of the Court of Appeal has said that “sexual orientation” should be regarded as a prohibited ground. One of the issues raised in the case was whether members of sexual minorities had any choice in the matter.

The courts also held that — when fixing judges’ salaries — it was forbidden discrimination to distinguish between judges appointed from practice and those who were promoted from lower level judicial posts.

There is no case on criminal record. Someone did go to court to challenge various reasons for not recruiting people into the KDF: criteria of age, weight, height and pregnancy – but not the one saying “no criminal conviction”. Did he maybe think it not unfair? Anyway he lost the case.

Whether there are restrictions on prospective employers refusing employment because of past convictions varies greatly. In South Africa, it is assumed that a criminal conviction irrelevant to the job may not be used to turn down an applicant. But employers may seek information and if a prospective employee lies to get the job, they may be sacked later.

In Mauritius, the Equal Opportunities Act makes it discrimination to refuse to appoint a person who has “a criminal record which is irrelevant to the nature of the employment for which that person is being considered.”

And if the person complains of discrimination, it is for the prospective employer to show the criminal record was relevant.

In other words, there is no blanket prohibition to take a criminal record into account – nor is there a blanket permission to do so. It all depends. And there is a useful published guide for employers on how to comply with the law. It includes deciding in advance if any criminal conviction would make it hard for a person to be employed for the job in question. If not, they should not ask for information about convictions.

This idea is found in a lot of countries – but not in Kenya.

After a certain period of time, certain convictions can largely be forgotten about. The UK Rehabilitation of Offenders Act says many convictions do not have to be disclosed after a certain time. It is complicated.

If a person is sentenced to imprisonment for four years or more, the Act does not apply. And when convictions can be concealed depends on the punishment given by the court. A sentence of six months or less can be concealed from 18 months after the end of the sentence. If the only punishment imposed is a fine, the conviction is spent after a year. It rather assumes sentences are rational and consistent.

But for certain occupations convictions are never spent under UK law – for example, jobs affecting national security, in the police, or judicial appointments. For some jobs, certain types of convictions must always be disclosed.

And in some countries, some professions or occupations must, by law, conduct background checks, including on past convictions before employing anyone.

Interestingly, a Kenyan court held it is unconstitutional to keep a life-long record of the offences of children.

The court said, “…a decision by which juvenile offenders are treated as an incorrigible mass cannot be supported. It flies in the face of the law and the reality. It fails to appreciate the fragility and immaturity of juvenile offenders and fails to take into account the best interests of a child. In a nutshell, it is patently unconstitutional.”

But the court did not say what might be constitutionally done. But at least it recognised the issue of juvenile misdeeds blighting a life.

There are several problems about requiring people to get Certificates of Good Conduct. First, a prospective employer will come to know about any conviction, even if it is totally irrelevant to the type of employment.

The record may be inaccurate and show that someone had a conviction when they did not.

On the other hand, many convictions may not be recorded – making equality a matter of chance. It seems highly probable that young men from underprivileged backgrounds are disproportionately represented in the police records – as in the prisons. So this practice rigidifies existing injustice, guaranteeing for many that they will never get regular employment.

Research shows applicants who are honest and reveal convictions may be able to convince an employer that the convictions is not relevant to the job. Also employers are less likely to reject an applicant if they learn about convictions only after they have assessed the applicant. Can they be debarred from using criminal record as an early screening mechanism?

A serious policy discussion about dealing with past convictions, especially in the employment context, is clearly needed.