• Rather than consider there could be specific grievances underlying the resort of a minority to terrorist violence, the US and the West preferred to blame it on “radical” preachers spreading anti-Western propaganda 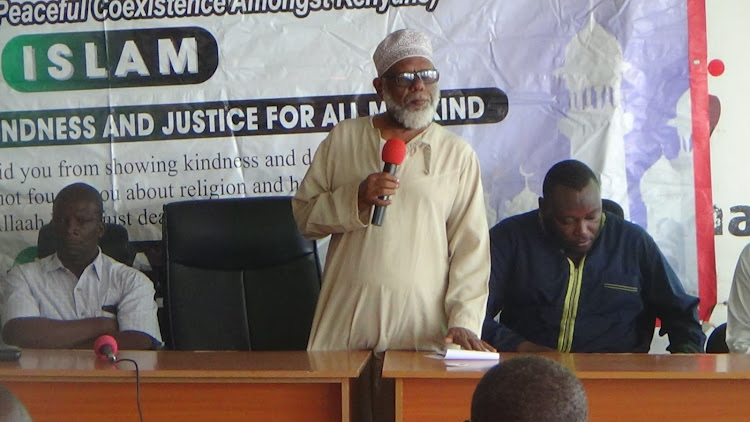 Sheikh Mohamoud Mau of the Association of Muslim Patrons. The outfit fights radicalisation and violent extremism at the Coast
Image: CHETI PRAXIDES

In an insightful piece for Harper’s Magazine, senior reporter at BuzzFeed News Joseph Bernstein questions the idea that disinformation spread on social media in the last five years— rather than long-term societal conditions — is responsible for crisis of faith in democratic institutions in the West.

For example, he argues that “the mosaic of experiences that form the American attitude toward the expertise of public-health authorities” is a better explanation for vaccine and mask hesitancy, than the hypnotic power of Facebook.

“Why have we been so eager to accept Silicon Valley’s story about how easy we are to manipulate?” he asks.

Bernstein traces the presumed power of social media companies to dubious mid-century academic studies, citing sociologist Jacques Ellul who in the 1960s wrote that such studies tended to “regard the buyer as victim and prey”.

However, conspicuously missing, especially as the anniversary of 9-11 approaches, is the tale of how this view has been supercharged by America’s 20-year Global War on Terror. In a very real sense, this is chickens coming home to roost.

The idea of “radicalization” and the “counter radicalization” and “de-radicalization” is built on a similar assumption of the manipulability of Muslim societies and people. Rather than consider that there could be specific grievances underlying the resort of a minority to terrorist violence, the US and the West preferred to blame it on “radical” preachers spreading anti-Western propaganda – the Facebook of the Middle East, one might say.

Faced with a rejection of the image of Western benevolence and, at worst, honest though tragic innocence, broadcast by mainstream media, governments and academics in Europe and North America found comfort in portraying Muslim populations as simple-minded and easily entrapped by the spells cast by angry, bearded clerics in flowing robes.

This is the same view Bernstein is seeing being reproduced in the West itself to understand their own non-compliant populations, a minority of whom also pose serious terrorism threats.

Governments with an authoritarian bent in the non-Western world have also latched onto the idea of “radicalization” to obscure the real grievances of their subjects over their policies.

In Kenya, authorities who for the last six decades have continued the colonial policies of marginalising and oppressing the country’s Muslim, especially ethnic Somali population, paid little more than lip service to this history — which has been extensively documented by the Truth, Justice and Reconciliation Commission — when confronted with discontent and terrorist attacks by local actors.

Even though 90 per cent of such attacks occurred after the invasion of Somalia in October 2011, there was little acknowledgment that may have something to with it. Instead, the history was flipped on its head and the invasion justified on the basis of what it inspired.

Further, the government, with the media in tow, took its cue from the US and blamed “radical” preachers for the violence, even targeting some for extrajudicial execution.

This is not to say radical preachers extolling violence have no effect – they clearly can influence a small minority of their followers to do terrible things. However, similar to disinformation on social media platforms in the West and elsewhere, their impact has been greatly exaggerated, and their audiences infantilised, by those with an incentive to do so.

Majority of those falling prey to radicalisation, violent extremism are the youths.
Opinion
1 year ago

Again citing Ellul, Bernstein argues that propaganda or incitement would not be effective without “pre-propaganda” – which he equates to the entire social, cultural, political, and historical context.

One can think of this context as the soil in which the violent ideas spread by the clerics can take root in particular individuals. Ignoring this and focusing solely on Fox News or radical preachers can lead to perverse “solutions” that entrench problems and privilege “acceptable” propaganda.

In her excellent talk on the limits of media literacy at the 2018 SXSW EDU conference in Austin, Texas, Danah Boyd, founder of the research institute Data & Society, points out that “fundamentally, misinformation is contextual” meaning what constitutes propaganda depends on who is labeling it.

“The difference between what is deemed missionary work, education and radicalization depends a lot on your worldview and your understanding of power,” Boyd says.

She argues that the culture wars waged between “progressives” and “conservatives” in the US are actually arguments over epistemology – how you know what you claim to know - that cannot be resolved through fact-checking or compromise. She sees the efforts of many liberal elites to debunk the beliefs of Trump voters as “assertions of authority over epistemology” and the propagation of a single, acceptable truth or worldview.

On the global stage, where the GWOT has transmogrified US culture wars, and the methods used to frame and understand them, into what Samuel Huntington called “a clash of civilizations”, this assertion of a singular truth channeled through Western prophets that negates the experience of much of the rest of the world, has been at the root of deradicalization efforts. Yet, they can have the opposite effect.

As Boyd puts it, “nothing can radicalize someone more than feeling that you are being lied to”.

Kwale parents urged to use religion to fight youth extremism

Many young people linked to radical groups and some die at gunpoint while trying to escape justice.
Counties
1 year ago
Post a comment
WATCH: The latest videos from the Star
by PATRICK GATHARA Political Cartoonist and Commentator
Siasa
08 September 2021 - 21:00
Read The E-Paper