PATRICK KARIUKI: Why Mukhisa Kituyi is right on Kenya's debt

He has proposed that Parliament's power to raise the debt ceiling be tightened, even be a constitutional matter

• The Jubilee administration has been a hot mess as far as our economy is concerned.

• Their profligate borrow-and-spend policies have devastated the national budget so decisively that we now send more money to Beijing, Washington and elsewhere than we spend on ourselves 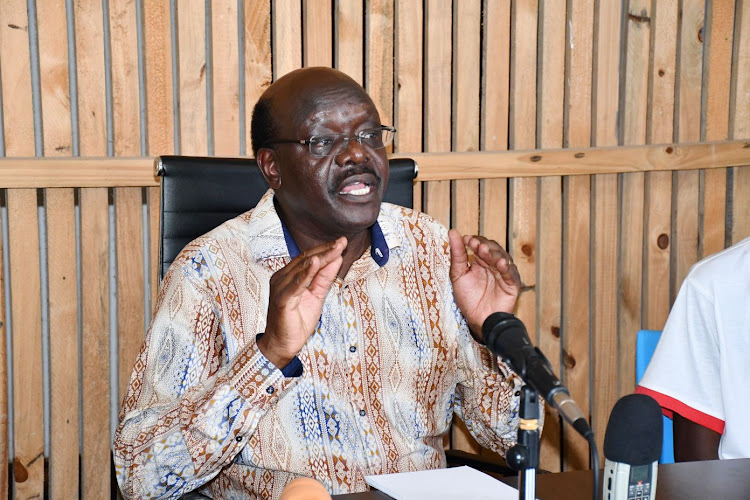 I have always had a soft spot for Mukhisa Kituyi since he deconstructed Francis Atwoli through devastating repartee many years ago.

"Every time Atwoli opens his mouth, he confirms my worst fears that he has nothing between his ears," Kituyi said.

This is why when Mukhisa called the national debt a constitutional matter on Citizen TV just a few months ago, I was like, yeah, that's new! That's important!

"The ability of Parliament to raise the ceiling of debt procured by the government should be tightened. As far as I am concerned, it should even be a constitutional matter to give it the gravity that it deserves," he told Waihiga Mwaura.

Well, somebody send the good doctor a drink on his own bill, for this is exactly what will save this country from bankruptcy!

My alarm at the state of the Kenyan economy, and the government's finances in particular, is not new.

The Jubilee administration has been a hot mess as far as our economy is concerned. Their profligate borrow-and-spend policies have devastated the national budget so decisively that we now send more money to Beijing, Washington and elsewhere than we spend on ourselves.

To wit, although the government's annual income is only about Sh1.8 trillion, its annual debt obligation is an eye popping Sh1.2 trillion!  And yet, every year, the same government reads a national budget that purports to spend over Sh3 trillion on national priorities when it only has a disposable income of Sh600 billion.

This is storytelling at its most preposterous by the Cabinet Secretary for Fiction, er, Finance.

A constitutional amendment to the effect that the National Treasury Cabinet Secretary cannot pick up the phone and fuliza billions from Washington or Beijing without the express approval of Parliament has never been more desperately needed. It is literally what the doctor ordered. I will go one step further.

Since an MP is a cheap commodity nowadays, Parliament cannot be trusted either.

Government borrowing should be spaced out in advance. Say, every two years.

Every time it wants to borrow, the matter is brought to the people through a special referendum. In the words of the late Ken Matiba, let the people decide! After all, they will pay for it!

We are very soon going to be in the throes of a political and financial crisis as this spendthrift administration hits the legal debt ceiling of Sh9 trillion.

Presumably, they will go to Parliament and get it raised yet again since — due to the handshake — they have the numbers to pull this off.

But one day the political and economic environment at the local and international level will be so hostile that the government of the day will not be in a position to borrow anymore. The hour of reckoning will truly be at hand.

Waihiga challenged Kituyi to declare his position on whether the state of Kenya’s finances allows it to borrow more or whether we are nearing default.

I was rather encouraged when in his reply he stated that he would prefer the Monetary Policy Committee provides some details before he hazards a response.

Now that's the kind of answer that you can only get from a man who not only understands economics and obscure government mechanisms, but also knows what he doesn’t know and is not willing to pretend otherwise.

The one thing we are surely going to need in the next President is not just competence but a sense of integrity and a respect for institutions and processes.

Chances are very high that Mukhisa’s competitors for the presidency would not fully understand what the MPC is, what it does or whether it exists at all without first getting a briefing from their advisers.

Mukhisa, just like Mwai Kibaki before him, seems to have these things at his fingertips.

How can we pre-empt the cancer of debt and send it in remission before it consumes our Treasury and, with it, our country?

Mukhisa has a prescription that he offered to Waihiga's audience: "First, retire the expensive and inflexible commercial credit that the Jubilee administration has relied on and replace it with other kinds of more friendly debt.

“Second, reign in the ballooning recurrent expenditure with regard to the civil service and the political bureaucracy. Third, cut our ambitions of infrastructural expansion according to the cloth at our disposal. Let us not overreach ourselves to create optics of modern infrastructure while we are struggling to service what we have borrowed before," he said.

Well, that's not a bad prescription from the doctor at all. In fact, it's exactly the medicine the government needs to restore its financial health.

Patrick Kariuki is a writer based in Nairobi who is battling his way through the Covid and economic crisis one paragraph at a time. The views expressed here are his own.