MWAURA: UhuRuto hostility: Is another handshake the ultimate legacy?

There have been recent calls for Uhuru and DP Ruto to reconcile and bury the hatchet.

• Kenya has experienced a situation whereby it’s hard to tell who is really in government and who is in the opposition.

• This has led to serious disenfranchisement of the voting bloc that gave the UhuRuto ticket victory in the first place during the 2017 repeat presidential elections. 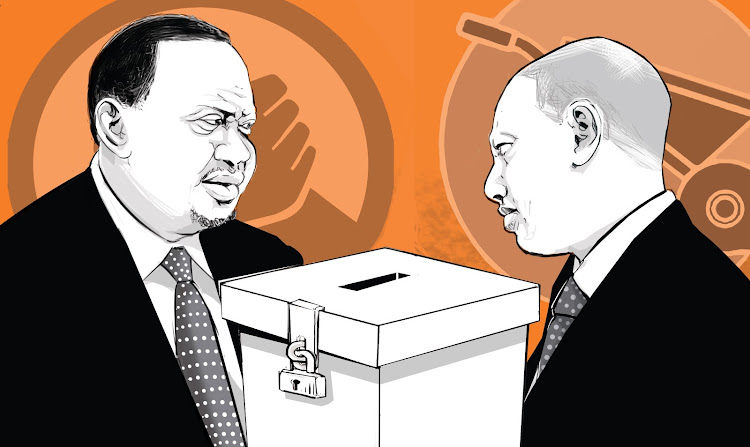 The escalation of hostilities as a result of the fallout of the BBI ruling in the courts has gone a notch higher with the perceived downgrading of DP William Ruto's security detail.

But what was witnessed was a well-choreographed session of political jabs and barbs aimed at the DP. The handshake team was quick to portray to the nation that the grievances were unfounded and that Ruto was indeed overprotected.

However, the General Service Unit is legally mandated to guard the President and the Deputy President and it was curious to hear the same team advancing an argument that the official residence of the DP isn’t ‘listed’ as amongst the state lodges.

This is a rather spurious argument since if it weren’t the case, then that residence would be considered illegal or private.

The fact that we can sink this low as a country just to settle political scores is quite telling of the challenges our institutions face due to personality based rather than ideologically based politics.

If they were to function purely based on merit, this would lead to the impersonal application of public policy no matter the office holder.

However, despite the rather signaling of the titles of Matiang’i and Kibicho (they have PhDs), their open show of partisanship and skewed disclosure of information to suit a pre-determined political narrative exposes them as being partial thus losing confidence such offices should espouse.

Recently, a newspaper headline questioned who was in charge of the country soon after the BBI ruling, inviting the Executive to flex its muscle in a show of might.

This is quite appalling since in a proper pure presidential model — the Washington consensus we adopted in the 2010 Constitution — the three arms of government are supposed to check on each other.

That the Judiciary has ruled that the BBI process was unconstitutional means that this arm of government was simply carrying out its constitutional and therefore democratic mandate.

Political views that were consistent with the findings of the court had nothing to do with inclinations or persuasions since the courts aren’t subject to such directives. If that were purely the case, then one arm of government would be rendered ineffectual and its existence unmerited.

Such degeneration, therefore, must be seen within two contexts: The resilience of our institutions on one hand and the 2022 succession politics on the other.

Two main aspirants for the 2022 presidential race have emerged — Ruto and Raila Odinga. It should be remembered that the 2007 post-election violence that pitted Raila and Ruto on one side against Kibaki and Uhuru on the other forms the backdrop within which the ICC cases were fomented, and the basis of the ‘first handshake’ that culminated into Jubilee with the symbol and slogan of Tuko Pamoja.

The much touted March 9, 2018 second ‘handshake’ at Harambee House — the very domicile of Matiang’i and Kibicho — caused an internal displacement within the first handshake.

The allies of the Deputy President and others caught in between were shoved off government positions, especially in parliamentary leadership.

Cabinet secretaries were reshuffled to departmental ‘cold rooms’ where nothing substantive takes place.

Kenya has thus experienced a situation whereby it’s hard to tell who is really in government and who is in the opposition. This has led to serious disenfranchisement of the voting bloc that gave the UhuRuto ticket victory in the first place during the 2017 repeat presidential elections.

While Uhuru reached out to Raila, who had sworn himself as the ‘people’s president’, its apparently clear that the country is highly divided.

Going by a recent opinion poll conducted by this newspaper, Ruto commands a huge lead at 43 per cent followed by Raila  at a paltry 14 per cent, a 29 per cent gap.

The One Kenya Alliance of Gideon Moi (Kanu), Kalonzo Musyoka (Wiper), Musalia Mudavadi (ANC) and Moses Wetang'ula (Ford-K) seem undecided on who is going to be the presidential candidate, with Gideon nearly endorsing Raila.

They have since promised they will announce their flagbearer in October and it remains to be seen if this will happen or they will be forced to go their separate ways, especially without the backing of the state largesse.

There have been recent calls for  Uhuru and DP Ruto to reconcile and bury the hatchet. This initiative is led by religious leaders and community elders. The lingering question is if this is a welcome move for both parties, especially the hardliners.

As the President enters the final days of his 10-year reign, his legacy would best be cemented if he remains nonpartisan as he fulfills his mandate of being a symbol of national unity. This is the best way to cement his legacy.

In the end, its Kenyans who shall decide who will be their next president.