PROFILE: Ndiritu Muriithi: In the footsteps of Uncle Kibaki

The Laikipia Governor was named Chairman, Raila Odinga Campaign Board

They both studied economics at university, worked in DP and Muriithi served in Kibaki's Cabinet. The uncle is easily the governor's biggest inspiration. And now, Muriithi has been tasked to chair Raila Odinga's campaign board ahead of the August 9th poll.

Raila and Kibaki bitterly contested for presidency in 2007, a political contest that plunged the country into post election violence.

They later formed a government of national unity, that limped all through to the 2013 elections when Raila competed with Uhuru but was trounced.

The story Kibaki and Muriithi starts in Laikipia.

“He was paying my school fees, both in secondary and high school. I don't know the context. But I think my dad had something to do with his own going to school. And he paid for many of us,” Muriithi recalls.

Born on February 10, 1967, Muriithi went to Kagumo High School in Kiganjo before proceeding to Alliance High School for his A-levels in 1984-85.

“My late brother Alex and President Kibaki arranged for me to go to Canada for my undergraduate at St Francis Xavier University. Naturally, I studied economics and finance, finished in 1990 and worked in Halifax for about a year-and-half,” Governor Muriithi told the Star on Wednesday in Nairobi.

He returned to Kenya in 1991, which would mark the start of working with his uncle in the Democratic Party. Kibaki was gunning for President in the following year's election.

In 1993, after Kibaki lost the polls to President Moi, Muriithi went to the University of Technology Sydney in Australia to study project management on a government scholarship.

“I came back and was in private consulting for about four years between 1996-99 assisting small and mid-size businesses to raise finance particularly for many of the flower farms owned by Africans in Kenya, Uganda and Tanzania,” he said.

Other projects they handled in financing include Nairobi Mamba Village, Karen Hospital, Nile Crocodiles in Kikambala and Githunguri Dairy.

At Githunguri Dairy, he worked with its chairman Njoroge Baiya, whom he would later serve with in the 10th Parliament.

Kibaki had a hand in influencing him to study abroad. “At Alliance, he and my brother were of the view that ‘why don't you go to university overseas’?” he said.

His choice of finance and economics also had a lot to do with Kibaki and Alex Kibaki, his brother.

“They are quite prominent in the way I grew up and quite influential in my choice of career”. But they were “very hesitant” about him joining politics.

“In 1992 when I went to work for the Democratic Party as an administrator, at one point Kibaki was anxious and said a political party was no place for a young professional. ‘You really need to agree to go back to industry’.” 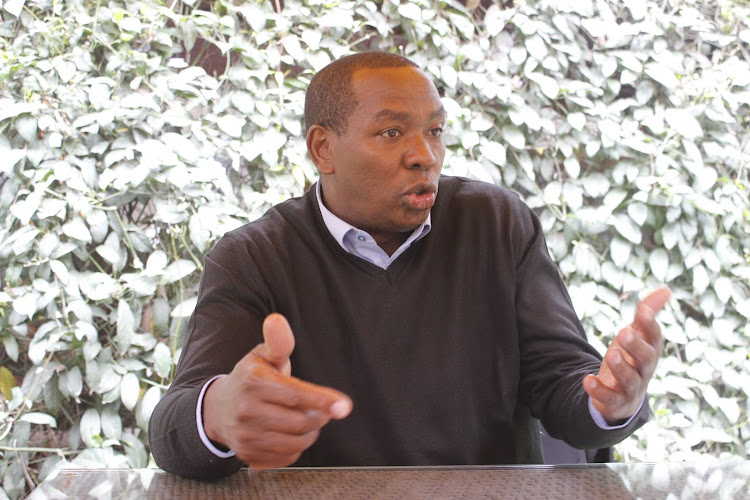 Laikipia Governor Ndiritu Muriithi during an interview with The Star at Panafric Hotel on Wednesday, August 25, 2021
Image: MOSES MWANGI

The young Muriithi, however, continued working in the background for DP. The party’s promise to create 500,000 new jobs if it took power was his idea with Moses Ndiritu, as they were responsible for formulating the party’s economic agenda.

It was based on crop production, a job an acre and they wanted to bring back 500,000 acres of land to production per year.

“And, ultimately, in 2002 the DP platform was what became adopted by the National Rainbow Coalition,” he says.

Muriithi remained as a volunteer for Kibaki’s presidential bid in 2002 election.

He recalls that around 1998-99, as young professionals with the likes of David Ndii, Ken Mbaya – now deceased - and Moses Mwaura they used to  meet at Panafric Hotel once a month and would invite prominent Kenyans to discuss the country's future.

“It was clear that some of us would need to go to frontline politics, because it's not enough to sit in nice restaurants and hotels like Panafric and pontificate about what is wrong with Kenya and blame politicians,” he says.

In January 2003, he decided to run for office, sold his brand-new Golden Golf to a friend and traded it for a Land Rover Freelander for the rough Laikipia terrain.

He resigned from IFC in 2007 but still didn’t inform Kibaki about his intention. Eventually, they had that conversation.

“It happened in a very interesting manner. We were sitting with some wazees and they asked him, by the way, you know this guy is running? And so he just smiles because he knows. I said, look, I was never going to tell you because supposing you say no? So, I say but give me advice. He told me listen to the people about what you're telling them,” he said.

He says it was “very interesting” working with Kibaki, “always trying to strike a balance”.

“What would happen is if he, for instance, didn't see me in the course of government for say two or three months, the next time he sees me he’d say something like ‘jamaa wengine, unakaa miezi mbili tatu na humuoni. Hata simu jameni’". [So people vanish for two or three months without even a phone call].

"But if he saw me like twice or thrice a week, he I’d say ‘jamaa unamuona leo, kesho, kesho kutwa, kazi yake inafanywa na nani?” [You see him today, tomorrow and the day after, who really does his work?]

He said Kibaki wasn’t one to call and follow you about your work; he expected you to do your job.

“It was also interesting because sometimes people would ask me what the President's position on something was and it's not like we have discussed with him but I could guess. When you know and understand someone's way of thinking and working, it's easy to see what position or direction he might be in quite a number of times. I would be correct. That made people think we met like every day,” the governor said.

On Kibaki’s style of working, Muriithi said if you went to his office at State House “you'd actually find a working person”, and if you were presenting a policy idea or policy position, he would ask you 100 different questions.

That was the case when Muriithi recommended to President Kibaki that the government drop KCPE for 100 per cent transition to secondary school. They went through the policy brief for two hours. It was not easy for the President to raise his voice, he says.

Muriithi unsuccessfully ran for governor in 2013 and went back to business. He raised Sh250 million in private equity to expand his Ngare Narok Meat Industries.

He also did advisory work for the African Union to create the Africa Audio Visual and Cinema Commission to promote African content. President Kenyatta also appointed him director in the Policy Compensations Fund

In 2017, he vied for governor as an independent candidate and won. How did it happen?

“I was in Jubilee nomination and it went south. Basically, some big fellows had a different view. So, the outcome was changed in this way. My competitor has 400 votes, then you just add three so that it is 3,400 votes. In another place, he has 200, you add one or two, then you end up with Jubilee nomination having twice as many votes as the registered voters,” he explained.

His attempts to follow up the matter with the party disputes resolution mechanism were futile.

As he prepared go to the High Court, a top Jubilee official advised against the move, encouraging him to go independent.

“One of the very senior persons now within the Jubilee secretariat called me and said, 'If I were you, I would look for Plan B because the pressure we have been put under here by some high office is that we cannot give it to you',” Muriithi said. There were claims that DP William Ruto interfered with the Jubilee nominations in 2017.

But even when he went independent, he was sued for using President Kenyatta’s portrait in his posters and fined Sh500, 000 by the IEBC. Wananchi helped him raise the amount through M-Pesa in three hours.

Once in office the governorship was a challenge. All the MCAs except one (PNU) were Jubilee members.

“Bringing down the political temperature and managing the politics in a positive manner, in spite of being in different camps, is number one of my successes,” he says.

Laikipia has rolled out the Universal Heathcare Coverage and at least 60 per cent of residents have NHIF and other forms of health cover.

Muriithi says they have made 1,000km marram roads in the rural areas and, in total, at least 3,000km have been improved.

He says his government has invested in towns such as Sipili, Kinamba, Rumuruti, Nanyuki and Wiyumiririe. The effect, he says, is the doubling of small businesses from 13,000 to 25,000 and employing over 40,000 people.

The county has arranged an economic stimulus for the small businesses away from national government through a Sh3 billion programme with leading banks.

He plans to defend his seat on the PNU ticket in 2022.

His parting shot is, while the politicians have the responsibility to responsibly exercise power, the media should hold the leaders to account and not allow them to make outlandish and wild claims that might threaten the peace and stability of the country.

Say President's absence and silence on direction of his succession have triggered confusion in the region.
News
10 months ago
by ELIUD KIBII Subeditor and writer
Siasa
06 January 2022 - 14:00