The public may interpret it as something that citizens would not willingly subject themselves to.

• Some argue the directive contradicts Article 32(4) of the Constitution, in which "a person shall not be compelled to act, or engage in any act, that is contrary to the person's belief or religion."

• It is the duty of policymakers to carefully consider the consequences of mandatory vaccination and its impact on the public trust and confidence. 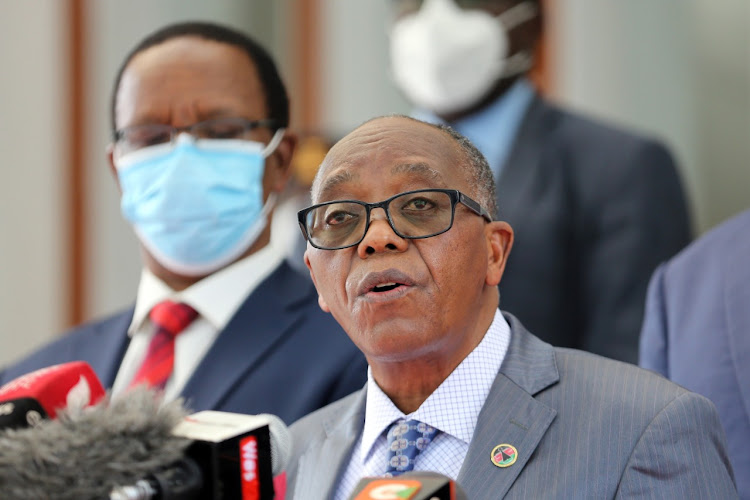 Reports in the local media indicate that Head of Public Service Joseph Kinyua has issued a circular on Covid-19 vaccination among public servants.

Kinyua is reported to have based his communique on the recent report by the National Security Advisory Committee that there was low uptake of Covid-19 vaccines among the public servants, especially among the security personnel, teachers and the core civil service.

The circular, which has, since been taken up by some counties, threatens to treat as [in]discipline cases those who will not have been given the first jab by August 23, 2021. The threat has been received with mixed reactions by officers and the general public.

Those opposed to the directive are expected to challenge the directive in court. They argue the directive contradicts Article 32(4) of the Constitution, in which "a person shall not be compelled to act, or engage in any act, that is contrary to the person's belief or religion."

That the threat to discipline them contradicts Article 27(4): "The state shall not discriminate directly or indirectly against any person on any ground, including race, sex, pregnancy, marital status, health status, ethnic or social origin, colour, age, disability, religion, conscience, belief, culture, dress, language, or birth."

It is the duty of policymakers to carefully consider the consequences of mandatory vaccination and its impact on the public trust and confidence.

If the threat to public servants to undergo mandatory vaccination will enhance the public in vaccine uptake and adherence to other public health measures, then this is the best decision. But if it will negatively impact public confidence or trust, there's justification to revoke the directive and defer the same.

WHO adds that these should be considered alongside other relevant scientific, medical, legal and practical considerations. It further says the document does not propose a position that endorses or opposes mandatory vaccination.

Later, a study by the PNAS (Proceedings of the National Academy of Sciences of the United States) datedJune 22, 2021 sought to establish how to overcome Covid-19 vaccination resistance when alternative policies affect the dynamics of conformism, social norms, and crowding out.

In their report, they found out that in March, the government of Galicia in Spain announced that vaccinations would be mandatory with violations subject to substantial fines.

Mandatory vaccination can lead to a general public perception that the vaccination is not effective and that the only way to boost its uptake is by force. The public may further interpret it as something that citizens would not willingly subject themselves to.

It is against this background that the directive should have sort to understand the reason behind hesitancy among its officers. For example, there are those with known allergies, other medical reasons, immune problems and or illnesses.

This is why the government should reconsider the mandatory vaccination on its officers.

Samson Nyasimi is a communication and public relations professional

It is the best shield against pandemic and benefits outweigh safety concerns
Health
5 months ago
by SAMSON NYASIMI
Siasa
13 August 2021 - 05:00