• Any relationship built on deceit is built to crumble.

• The “breach of trust” for the second time has put Mudavadi permanently on guard to prevgent another political heartache caused by demons of betrayal. 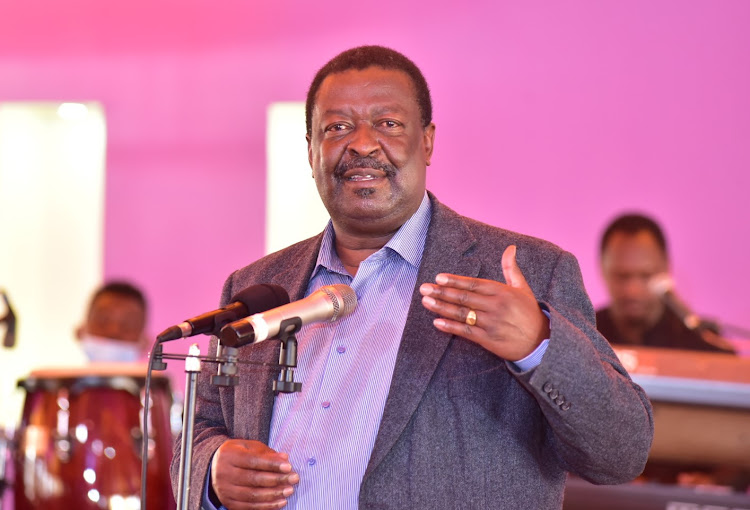 Once bitten, twice shy. This is what’s troubling ANC leader Musalia Mudavadi, as talk of Nasa revival keeps coming up.

In the run-up to the 2013 General Election, Mudavadi was invited by Uhuru Kenyatta and William Ruto to join them and be the presidential candidate.

The duo was then facing international crimes at the ICC over their alleged roles in the 2007-08 post-election violence.

It was preparing a presidential bid on a joint ticket but apprehensive the ICC cases would stand on its way.

The cases were dropped for lack of evidence as witnesses recanted, disappeared or died.

In his book, Soaring Above the Storms of Passion, Mudavadi narrates how Uhuru and Ruto visited his Nairobi home uninvited to woo him to run for the presidency with their blessings.

He cautiously took up the challenge by inviting the then Unctad secretary general Mukhisa Kituyi, among others, to witness the MoU between him and UhuRuto.

But things collapsed even before the ink on the deal dried. It was clear, UhuRuto’s promise to him was laced with deception.

Any relationship built on deceit is built to crumble. Uhuru and Ruto deceived a trusting Mudavadi and dropped him when they decided it was convenient to discard him.

In a veiled attack on Mudavadi, Uhuru soon after held a press conference condemning some “demons” for wanting to reap where they didn’t sow.

The ‘demon’ referred to by Uhuru was Mudavadi, the man he and Ruto had voluntarily courted.

This betrayal shook Mudavadi’s quest for the presidency but he bravely fought on and vied, performing dismally.

Then came Nasa in 2017. Mudavadi was a co-principal due to his ANC party.

Mudavadi calls this a deception and accuses ODM and Raila of reneging on the MoU.

The 'breach of trust' for the second time has put Mudavadi permanently on guard to prevent another political heartache caused by the demons of betrayal.

This informs his insistence that Nasa is as dead as a dodo.

Mudavadi feels deceived multiple times and it is is crystal clear that deception is at the heart of his cautious approach to political deals in next year’s election.

In the words of Robert Southey, “All deception in the course of life is indeed nothing else but a lie reduced to practice and falsehood passing from words into things.”

But, isn’t it much dearer to suffer any sort of deception that boosts your spirits than a host of low truths as Southey agrees?

Then, while the son of Moses, the apparent owner of the safest pair of hands in the republic, thought the season of deceptions had come full cycle — shock.

The 'Handshake' came and he was not made aware prior to the deal. Mudavadi believes he should’ve been informed of Raila’s plan for a truce with Uhuru on March 9, 2018.

But like the rest of us, Mudavadi watched the news of the 'handshake’ on TV and read about it in the newspapers. He must have felt terribly deceived.

But where was he when Raila was being 'sworn in' as the people’s president on January 30, 2018? By taking the oath, Raila proved he can succeed without Mudavadi et al.

The ANC leader, like his Wiper and Ford Kenya counterparts Kalonzo Musyoka and Moses Wetang’ula, respectively, were nowhere to be seen when Raila needed them at Uhuru Park in a show of solidarity.

The Nasa co-principal gave the event a wide berth yet he had appeared in the media calling on Nasa supporters to turn up in large numbers at Uhuru Park.

But in August 2018, Mudavadi told a TV station he didn’t turn up at the event because he believed it was “unconstitutional”.

If it was unconstitutional, why did he tell Kenyans to attend? This portrays the former finance minister as a leader who cares less about his supporters. He evolved from being the deceived to being the deceiver.

From this act alone, Mudavadi has taught us that political deception is a game that cannot be avoided in some circumstances. He, therefore, shouldn’t take it personally because it’s part of the game.