• China’s success hinges on the CPC. Without it, there would be no new China and no rejuvenation of the Chinese nation.

• The CPC’s role in leading the country is the choice of history and of the people. 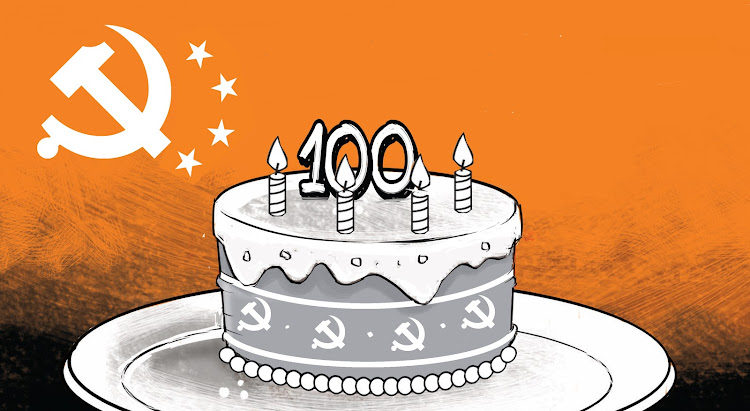 July 1 is a great and solemn day in the history of the Communist Party of China and the Chinese nation.

Addressing a grand gathering at the iconic Tian’anmen Square on that day, Xi Jinping, General Secretary of the CPC Central Committee and President of China, hailed the party’s success over the past century and called on it to continue its hard work to achieve national rejuvenation.

China’s success hinges on the CPC. Without it, there would be no new China and no rejuvenation of the Chinese nation. The CPC’s role in leading the country is the choice of history and of the people.

When the CPC was founded in July 1921, China was like a loose heap of sand, facing grave dangers at home and abroad, trapped in a morass of social crises. Over the course of a century, the CPC has, leading the Chinese people, made unprecedented achievements.

By completing the New Democratic Revolution and founding the People’s Republic of China in 1949, the CPC put an end to the semi-colonial, semi-feudal society of old China and realised national independence and the people’s liberation.

By completing the socialist revolution and establishing socialism in China, the CPC brought the most extensive and profound social change to the Chinese nation.

By introducing the policy of reform and opening up, the CPC has pioneered socialism with Chinese characteristics so that the people can enjoy a better life.

By implementing the five-sphere integrated plan and the four-pronged comprehensive strategy, the CPC has ushered in a new era of socialism with Chinese characteristics.

China has stood up, become better off, and grown in strength. Today, China is closer to, and more confident and capable than ever before, making the goal of national rejuvenation a reality.

When the 13 delegates convened for its First National Congress 100 years ago, the CPC had just over 50 members. Today, with more than 95 million members in a country of more than 1.4 billion people, it is the largest governing party in the world and enjoys tremendous international influence.

CPC has thrived because it is always committed to its original aspiration and founding mission whether in good or bad times and perseveres in marching towards its goal, winning the wholehearted support of the Chinese people.

Over the years, many independent opinion polls conducted by Western research institutes have invariably placed the approval and satisfaction ratings of the CPC and the Chinese government among the Chinese people at the top of world rankings.

In July 1945, Huang Yanpei, a prominent educationist and leader of the China Democratic Political League, visited Yan’an and posed a question to Mao Zedong: “How can the CPC break out of the cycle of rise and fall throughout China’s history?” Chairman Mao explicitly pointed out: “We have already discovered a new path. We can break out of this cycle. This new path belongs to the people. This new path lies in democracy. The government will not become complacent only if it is under the supervision of the people. If everyone takes responsibility, a good system of governance will prevail”.

Indeed, people’s democracy is a glorious banner that the CPC has always held high. The CPC takes it as a mission and guiding principle of governance to support, develop and guarantee people’s democracy. Without democracy, there would be no socialism, let alone socialist modernisation and the rejuvenation of the Chinese nation.

Under the leadership of the CPC, China’s socialist democracy is the broadest, most genuine, and most effective democracy to safeguard the fundamental interests of the people.

The people, as masters of the country, are the essence and core of socialist democracy.

Unity of democracy and centralisation, unity of electoral democracy and consultative democracy, and fully protecting the people to enjoy human rights according to law, are hallmarks of socialist democracy with Chinese characteristics.

Whole-process people’s democracy is guaranteed with scientific and comprehensive institutional arrangements. In China, commitment to the unity of the CPC’s leadership, the people’s position as masters of the country, and law-based governance is a natural element of socialist political advancement. These three elements are integral components of socialist democracy.

The pursuit of democracy is a universal value of people around the world, but the democratic system and path of each country should be decided by its own people, rather than imposed by external forces. The world today is diverse and vibrant. Democracy should not, and cannot, exist only in one mode. Recognising and accepting the coexistence of various modes is in itself a manifestation of democracy in international relations.

Zhou Pingjian is Ambassador of China to Kenya