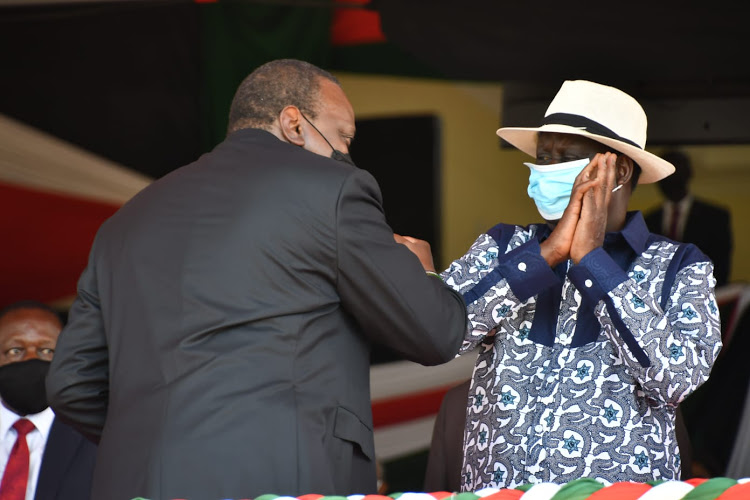 The Jubilee Party's proposed grand alliance with opposition outfit ODM has sparked realignment within President Uhuru Kenyatta's camp and for a Third Force ahead of the 2022 election.

Already, there are fears of an impending mass exodus from the President's Kieleweke camp, especially from the Mt Kenya region, exposing his slackening grip on his backyard.

The haemorrhage, analysts warn, has the potential of denting the President's image and consequently deflate his plan to play a kingmaker role in the 2022 succession race.

Days after the ruling party unveiled a plan to craft a succession plan ensuring a joint presidential candidate with the Orange party, things have turned sour on the President's side.

A section of the President's strategists are said to be breaking away from the Jubilee-ODM political plan with an elaborate scheme to prop up another force from within ahead of the next polls.

The push for a third force is said to be premised on the need to propel a new crop of progressive leaders to the country's leadership apex to inject fresh blood.

It will likely include senior government officials, including some CSs and CASs, some members of civil society and pro-reform crusaders.

Some governors who are completing their second terms next year and who do not fit into either of the Uhuru or Ruto camps are said to be plotting to join the force.

If it takes shape, the force could jolt President Uhuru's plan to play a significant role in handing over power to his preferred successor.

While referring to the possibility of a third force, former Eldama Ravine MP Musa Sirma said it could alter the 2022 game plan, especially if opposition leaders fail to unite.

The MP said unless the One Kenya Alliance unites with Nasa bigwigs, their hopes of succeeding Uhuru would go up in smoke.

“It is either they win together or they are defeated separately,” the former Cabinet minister said, adding that the Third Force faces a daunting task.

According to the plan being mooted by some strategists, the Third Force will reap from the anti-Ruto voters and disgruntled people opposed to Uhuru's succession plan.

Some civil society groups are said to have started crafting a plan that will see them campaign against Ruto and Uhuru's preferred heir on the platform of 'fresh blood' in the country's top office.

“There will be a huge population that will rebel against the system and the status quo, that is the lot we are talking about and which could shape the 2022 presidential duel,” a civil society activist who sought anonymity said.

Some Cabinet ministers and top government officials are said to have rebelled against the President's succession plans and are scheming their next step.

Part of what is causing qualms within Uhuru's camp is a feeling that the proposed Jubilee-ODM alliance may destroy some politicians and civil servants' 2022  ambitions.

Some of the public servants salivating for other posts ambitions are said to have panicked that the Jubilee vehicle may crumble and complicate their chances in 2022.

Given that the electoral cycle is expected to clock in from August this year, there are fears most public servants nursing political interests might be forced to quit early to embark on campaigns.

Information gleaned from interviews depict a desperate situation of confusion within the Uhuru camp, signalling a likelihood of looming alignments and realignments, 12 months to the 2022 polls.

The Star has established cracks that have also unsettled the President's Cabinet and strategists over his succession plans. Some are said to be uncomfortable with the Jubilee-ODM arrangement.

The President's declaration that he will support one of the National Super Alliance chiefs as his successor is the straw that could break the camel's back.

However, although the President has not publicly declared his heir apparent, his increasing camaraderie with ODM boss Raila Odinga has triggered speculation that he has a soft spot for the opposition chief.

“The President's ultimate game plan will not necessarily augur well with everybody. There are those who would rebel because they wanted things to go a certain way,” he told the Star.

The former Bureti MP said the coming months are going to be very delicate for the President as he tries to balance a lot of interests to navigate a smooth succession.

“There will be heightened suspicions in most camps as the 2022 succession process takes shape,” he said.

In the first force, the President is said to be working on a plan to ensure the Nasa chiefs stick together and work with him ahead of the polls.

Already there is a campaign to bring together Raila with his Nasa partners of Musalia Mudavadi (ANC), Kalonzo Musyoka (Wiper) and Moses Wetang'ula of Ford Kenya to form a behemoth political movement.

Kanu chairman and Baringo Senator Gideon Moi, whose party has a post-election coalition with Jubilee, has been in the One Kenya Alliance of Musalia, Kalonzo and Wetang'ula but he appears drifting to the President's side that also includes Raila.

However, there are concerns that trying to reunite the opposition figures to field a joint presidential candidate could come a cropper because of competing political interests, giving rise to a second political force.

Interior Cabinet Secretary Fred Matiang'i, who is the chairman of the Cabinet committee coordinating all government developments projects, is also a key cog in Uhuru's succession wheel.

He is chairman of the National Development Implementation and Communication Committee. As such, Matiang'i is a darling of the President and swiftly took charge of Deputy President William Ruto's roles after his falling out with Uhuru.

“The CS has performed very well in coordinating his colleagues in the Cabinet. He has executed the President's assignments with sheer precision but what stands between him and the Presidency is the Uhuru factor,” the analyst said.

Okwemba said the President wants the CS to fit into the succession framework with Raila, though it is not clear how Uhuru plans to identify his heir.

“You never know, it is too early to tell. Perhaps Uhuru and Raila have their trump card for a 'Tosha declaration' that might send Matiang'i to the top office.

Ruto is already leading the Second Force that brings together members of his Tangatanga squad that subscribes to the hustler nation, which they say is an unstoppable revolutionary movement.

While the DP's camp is comprised of youthful politicians without key regional heavyweights that are in Nasa, his hustler national movement has shaken and turned the tables on Uhuru in his Mt Kenya backyard.

The threats posed by the Tangatanga juggernaut in central Kenya pose a serious challenge to the President's hopes for a solid and united backyard to push through his succession plan.

Nyeri Town MP Ngunjiri Wambugu, a key Ruto critic, appeared to insinuate all is not well in the ruling party, revealing that if things remain the way they are, then more defections could be underway.

“As things stand, I will not be surprised if we lose another one or two more valuable players. We have some heavy lifting ahead to fix our party and not everyone will want to do it,” he said.