To withdraw from Somalia or not, the debate creeps up

President Uhuru Kenyatta has maintained that KDF will remain in the neighbouring country until peace is achieved.

• In a statement on June, Somalia through the Ministry of Foreign Affairs accused Kenya of killing civilians by use of airstrikes in the war against al Shabaab. 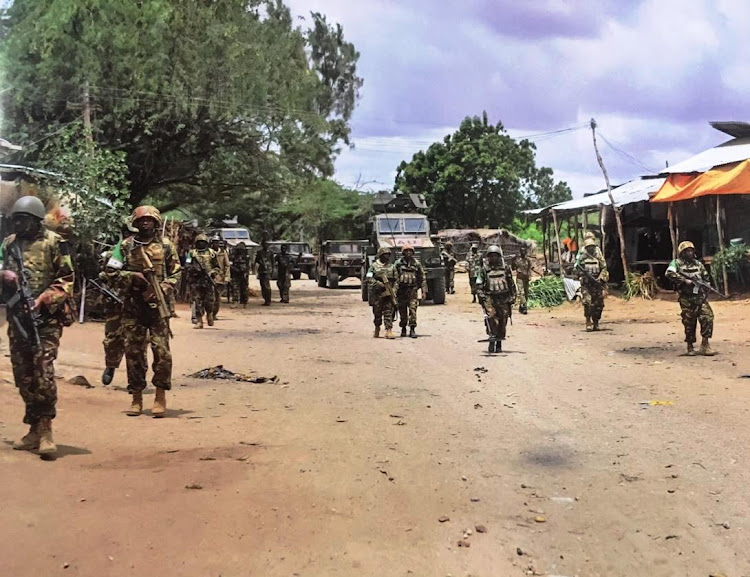 KDF soldiers on a patrol in Somalia
Image: KDF

The call for the withdrawal of Kenya Defence Forces from Amisom is slowly reemerging.

In a statement this month, Somalia, through the Ministry of Foreign Affairs, accused Kenya of killing civilians using airstrikes in the war on al Shabaab.

It said the latest attack was in El Adde and Hisa-u-gur in Gedo regions on June 3, which claimed lives and caused injuries among women and children.

The statement just fell short of calling for the withdrawal of KDF soldiers and instead said the “acts of violence” bring to focus the importance of ongoing discussions on the Somalia Transition Plan, as well as the “components of the AU mission post-2021”.

KDF has yet to respond, but Amisom Sector II Commander Brigadier Jeff Nyagah, who is also the Contingent Commander of the Kenyan troops serving in Somalia, on June 5 visited troops deployed in various Forward Operating Bases in the country.

In the two-day visit, Brigadier Nyagah visited troops based at Kolbiyow, Ras Kamboni, Kuday, Abdale Birole, New Airport, Old Airport and Sea Port FOBs where he said they remain committed to the Amisom’s mandate and the peace process. The mandate, for the umpteenth time, was extended until December.

“We thank you for your service to humanity, which is a service to God; your sacrifice is not in vain. Your efforts have highly contributed to spurring of socio-economic activities, which are critical in achieving peace,” Nyagah said at the Ras Kamboni base.

Amisom, in a statement, said it would probe the claims, noting that it is obliged to carry out its mandated tasks in Somalia in manners consistent with its Troop and Police Contributing Countries obligations under all applicable international legal instruments.

“The Mission is, therefore, committed to investigating all allegations of rights violations that are levelled against troops under its command in Somalia. Towards this end, Amisom shall fully investigate the alleged incident and the findings shall be shared with all relevant stakeholders,” the statement said.

On May 25, al Shabaab released a video of a KDF soldier taken captive by the militants during the El Adde attack five years ago. In the video released by its media outlet Al-Khataib Foundation, Sergeant Gerishon Wasike called for the withdrawal of Kenyan forces as the US did after “realising it is not worth shedding their blood here” and because “Somalis don’t want us here”.

However, Major General (Rtd) Charles Mwanzia said the US troops withdrew and left a void that may not be filled by any other state.

“In any case, al Shabaab should have been considered and allowed to start a political party. This would have eased the tension and bring a semblance of security back to Somalia,” he notes.

Al Shabaab viewed the repositioning or withdrawal of US missions as a win.

But in an interview with Vice News in March, Major General Dagvin Anderson said the US still has periodic engagements and it might be too early for Shabaab to celebrate as they still have to deal with Danab forces.

This is a mixed-clam special force of the Somalia National Army trained by and in the US. It is largely seen as the eventual successor of the SNA.

Anderson maintained it is important that the international community remains engaged in Somalia.

“Al Shabaab is a threat to the international community, the United States. To be clear, it is part of al Qaeda, which has already proven the will and ability the West and the United States,” Maj Gen Anderson said.

President Uhuru Kenyatta has maintained that KDF will remain in Somalia until peace is achieved.