Uhuru is right on Judiciary and BBI, Ruto gets it wrong

The Constitution must be read liberally and where possible, to reach beyond what is stated in the text

• Uhuru said Judiciary’s decisions must not only consider the letter of the law, but they must also be guided by the spirit of the law.

• On the other hand, DP Ruto suggested BBI is about Uhuru and Raila and they are ignoring the Constitution to make it the law. 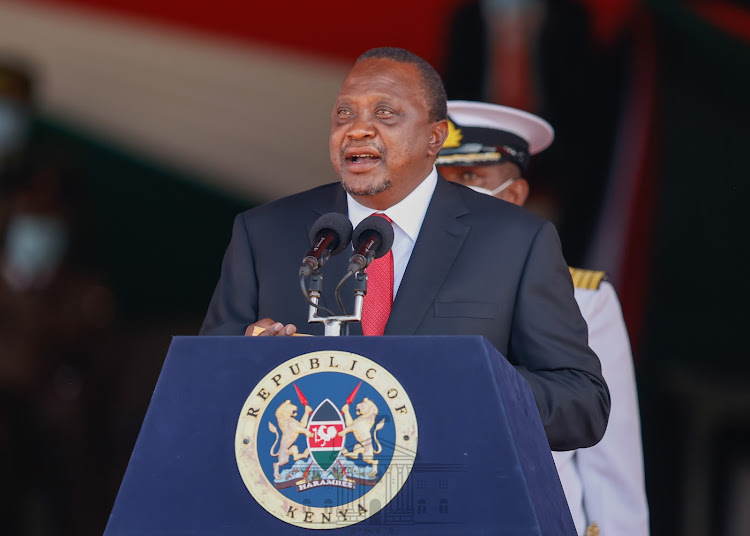 President Kenyatta delivers his speech during the 58th Madaraka Day celebrations on June 1 at the Jomo Kenyatta International Stadium in Kisumu
Image: PSCU

When starting to come of age, I recall listening on the radio to a thunderous voice saying what to me seemed to be marvellous things at some public rally. The outbursts were sometimes comical, especially when said in the orator’s vernacular.

I still play back those speeches on YouTube and still find them nostalgic.

The orator was Founding father Mzee Jomo Kenyatta. Few will disagree the man could speak and though not as fiery some of his contemporaries, his delivery was superb, and his message hardly ever mistaken.

He roared and the roar became the order of the day, never mind what the Constitution or law said.

The speeches also readily revealed Kenyatta’s character. He was unabashed to say what he believed but never as recklessly unfiltered as the world came to witness Donald Trump, the one time, twice impeached and now failed former US President.

Jomo was measured and rarely missed to deliver his points. People clung to each word he uttered for it was not nonsense, rosy or said for the sake of it—that was usually confined to what his speech writers wrote. When speaking off script, that is when Kenyatta told people off or really had you know what was in his mind.

It is a gift his successor, Daniel Moi, did not have, though he had his own style, often coming across as inept, ill-prepared and without oomph. However, one would make a mistake to think he did not know what he was talking about.

He knew and inarticulate as he could often be, what he said was not any less actionable than was that of his predecessor.

His successor, President Mwai Kibaki is known for his brains but speech giving will not be at the top of his accomplishes when the history books are written. Rather, it would be the economist-cum-president had more people nodding off during his speeches than for any president before him.

Each of these former presidents has at one time or another given memorable speeches, with Moi’s being his speech announcing the repeal of Section 2A in 1991.

Kenyatta’s no doubt would have to be the one he gave in Kisumu on October 25, 1969 in which he sought to stamp his authority in Nyanza province following tensions brought about by the assassination of Tom Mboya.

More accurately, it is the speech that never occurred that makes the event more memorable than even Kenyatta’s Independence Day speech as the occasion defined Kenyan politics ever since, and we are still living its consequences.

It was, therefore, befitting that after the ups and downs of the handshake and the BBI, President Uhuru Kenyatta and his handshake partner decided to have the 58th Madaraka Day celebrations in Kisumu.

As if to finally mark this day as the ultimate departure from the 1969 episode and everything else that ensued to date, the President gave a poignant speech in which he focused on the Judiciary and the BBI.

More specifically, Uhuru said Judiciary’s decisions must not only consider the letter of the law, but they must also be guided by the spirit of the law.

In other words, the Constitution must be read liberally and where possible, to reach beyond what is stated in the text to effect what is good and in the public interest.

Uhuru is saying even with its known shortcomings, BBI is overall good for the country and that being the case, the appellate courts hearing the case must let it be over all other considerations, including the politics of it.

For his part, Deputy President William Ruto said celebrations across the country should not be about personalities but constitutionalism and respect for the rule of law. The DP was not explicit but the argument he is making is that BBI is about Uhuru and Raila and they are ignoring the Constitution to make it the law.

History will prove Uhuru’s position to be better than Ruto’s.