What can Kenya learn from India’s Covid-19 crisis

The national and county governments must invest heavily in hospitals.

• On Wednesday, the Kenyan government announced that five cases of the Indian variant had been reported in Kisumu.

• This means Kenya must now take strict measures before it’s too late. What can we learn from India to avoid such a situation? 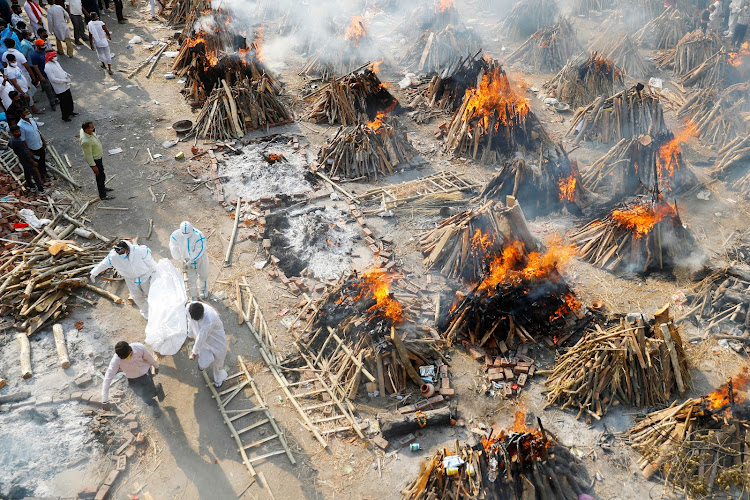 A general view of the mass cremation of those who died from the coronavirus disease (Covid-19) at a crematorium in New Delhi, India, April 26, 2021.
Image: REUTERS/Adnan Abidi

India is experiencing a devastating second wave of Covid-19, which overrun its health system.

It has been recording over 400,000 cases daily, to become the only country that has ever recorded such high numbers since the pandemic began. In April alone, there were six million infections.

The WHO has described the situation as ‘’beyond heart-breaking.’’

On Wednesday, the Kenyan government announced that five cases of the Indian variant had been reported in Kisumu.

This means Kenya must now take strict measures before it’s too late. What can we learn from India to avoid such a situation?

One, the national and county governments must invest heavily in hospitals. India invested a lot in private healthcare to tap into the plum medical tourism, unfortunately creating a gap in public health, which is often necessary in pandemic response.

The effect is that the overrun of the healthcare system. Countries that have managed to handle their Covid-19 situation are those that invested heavily in public healthcare. Just like India, Kenya is experiencing shortage of medical oxygen in hospitals. This means both levels of government should move in speed to ensure we have enough oxygen production plants in all counties.

We should also have enough hospital and ICU beds. In India, situation is so dire that even three patients are often put together in a bed.

Two, roll out a serious vaccination drive. Despite being a producer of AstraZeneca vaccine, India has only vaccinated less than 10 per cent of their population.

Their government relaxed in ensuring a serious vaccination drive, until it was too late. Kenya has a population of 50 million people, but those vaccinated are less than a million. With the shortage of AstraZeneca vaccines due to export restrictions from India, Kenya should source for other types of vaccines and ensure we have enough stock to vaccinate everyone.

Three, we must avoid huge gatherings. On May 1, President Uhuru Kenyatta lifted the lockdown he had imposed on five infected counties and allowed for reopening of bars, restaurants and religious places. However, Kenyans must be reminded that we are not out of the woods yet for them to gather.

Experts have cited gatherings as some of the reasons why this surge has happened. We must avoid any large gatherings even as we wait on the way forward on BBI referendum. Kenyans must also be reminded that, it is their personal responsibility to avoid gatherings, ensure they wear a mask every time they are in public places, wash hands regularly with a soap or use sanitisers.

Four, the government must invest in research. We cannot predict how various variants of Covid-19 will affect our country. Therefore, funding research on the variants spread should be prioritised.

More money should be channelled to Kenya Medical Research Institute, which has played an important role in the fight against malaria, polio, HIV-Aids and other diseases in the past.

Lastly, the Kenyan government must remain cautious for the next few years because dropping our guard for any reason could causes us irreparable problems.

In January Prime Minister Narendra Modi declared victory over the virus, telling the virtual gathering of the World Economic Forum that India’s success couldn’t be compared with anywhere else. That is not the case three months later.