MUCH ADO ABOUT NOTHING

No reforms of IEBC or conduct of elections, no burning issues; fuss about new positions overtaking our good sense.

• It's is time to let the BBI process die and those especially on the side of Raila should openly sabotage it, because they know it is not as popular with their people as they pretend to convey on TV

• When you combine all the problems Kenyans have with the effects of the Covid-19 pandemic, BBI is the least of our worries. Ordinary people don't know what's urgent about it 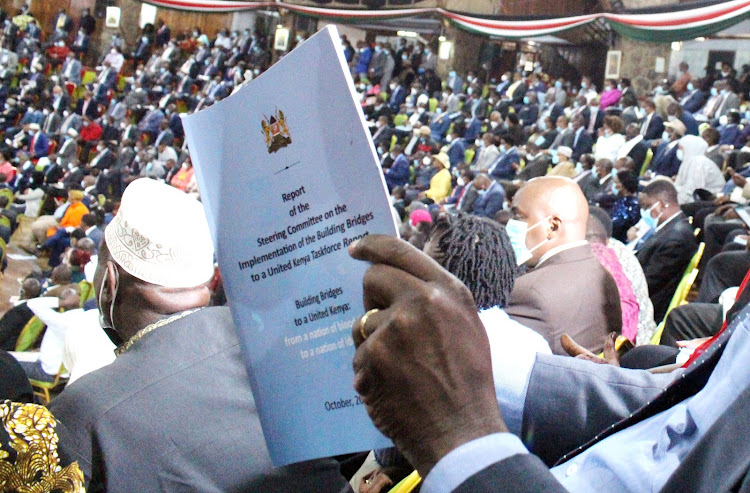 A delegate reads a copy of the BBI report during its launch at Bomas of Kenya on October 26, 2020.
Image: ANDREW KASUKU

If you ask anyone in this republic, what is so fundamentally life-changing in the BBI Bill that we have to pass it before the next election, you will probably get blank stares. Nobody knows why BBI is so urgent or so important, including its top proponents.

In recent times, both proponents and opponents of the Bill have gone into overdrive in making the confusion around it even more pronounced.

The first proper attempt at constitutional and political reforms in Kenya in the multiparty era dates back to the IPPG deal ahead of the 1997 election. In it, the Kanu regime and the opposition agreed on key areas that required reforms to create a level playing field.

Predictably, it was anchored a lot on electoral reforms and the management of the Electoral Commission of Kenya. The opposition wanted the appointment of commissioners, management of elections, access to the media and the environment of campaigning improved. Time was running out and going to the election in the same environment as 1992 was simply out of the question.

The BBI approach is different. There has been no attempt to pick out the burning issues that really need reforms before the 2022 election. Given that the IEBC and the conduct of elections are the most contentious matters in this country, you would have thought these would rank top of the list for those pushing for its passage.

But no, the BBI Bill hardly has any reform agenda for the IEBC. Indeed, the President unilaterally moved to announce the start of the process of appointing the selection panel that will vet new commissioners last week.

These past few weeks, the BBI Bill has been in the headlines for all the wrong reasons. Quite incredibly, word on the streets is that several county assemblies passed different versions of the Bill.

Now, in our layman’s world, you would take it for granted that the promoters of the Bill took one copy to IEBC, which, after confirming the authenticity of everything therein, would make their own 47 copies of the same Bill for the counties. But no, apparently in the intriguing world of electoral institutions, things don’t work that way.

In certain regions of the country, proponents of the process have pointed out its advantages being the proposed addition of constituencies, with their attendant CDF resources for their people. But this is the direct opposite of the situation elsewhere.

So we are now in the shocking phase where no one knows what happened before, during and after the presentation of the Bill to the IEBC. This is a constitutional reform process we are talking about here!

If the BBI process has been promoted thus far as a joint project of President Uhuru Kenyatta and ODM leader Raila Odinga, the basis on which it has sustained itself, the quarrels around it in the past weeks show that any semblance of trust it enjoyed is all but gone. And this is the problem with a process that doesn’t have pillars on which it can be anchored.

In certain regions of the country, proponents of the process have pointed out its advantages being the proposed addition of constituencies, with their attendant CDF resources for their people. But this is the direct opposite of the situation elsewhere.

They do not say it openly but Luo Nyanza politicians, for instance, have a difficult time explaining to their voters why the region should get three proposed seats, against another region’s 20. This explains why the IEBC’s assertion that it is the only institution mandated by law to distribute constituencies is so popular with others, but very unpopular elsewhere.

The net effect of these fights over BBI is that the entire process now appears as if it was a cluster of dreams and ambitions, not many of which found their way into the Bill. I am persuaded that the BBI process is really too much ado over nothing. I dare say, even the image of popularity it may have had a few months ago may have gone with the wind.

The people who sit at the top of the country’s political food chain may not know it, but if you remove the need for electoral reforms and the manner of running elections in this country, which BBI does not solve anyway, I cannot see what exactly we would be in a hurry to pass in the Bill.

It was ANC leader Musalia Mudavadi, in an interview last year, who rightfully asked Kenyans to take note of the fact that all these so-called reforms usually take centre stage when a president is heading to retirement. The import of his argument was that people hold power in this country, and only see the excesses of certain institutions like the presidency when it is their time to leave.

Which brings me to a point often made by opponents of the process: that the whole thing is meant to mask the real intention, which is to create positions for those who want to stay on after this regime is done, or for purposes of negotiating power deals. It is easy to buy this argument, once you read the Bill and notice there is nothing urgent in it.

It was ANC leader Musalia Mudavadi, in an interview last year, who rightfully asked Kenyans to take note of the fact that all these so-called reforms usually take centre stage when a president is heading to retirement. The import of his argument was that people hold power in this country, and only see the excesses of certain institutions like the presidency when it is their time to leave.

At that time, Mudavadi was an opponent of the BBI process. I don’t know if he holds the same view, but I find it easy to agree with him, that this fuss over positions is overtaking our national good sense.

I submit that it is time to let the BBI process die a natural death, and those especially on the side of Raila should openly sabotage it, because they know by now that it is not as popular with their people as they pretend to convey on TV.

In its place we must urgently move the national conversation towards what happened with the USAID ARVs, how to resurrect businesses killed by the Covid-19 pandemic and attendant restriction measures, how to regularise the school calendar before we are overwhelmed, and, to my lakeside people, how to save Lake Victoria from choking its fish species into extinction.

There is nothing the BBI aims to do that we cannot achieve under the current constitutional framework, and all this energy being expended on it amounts to playing musical chairs with the lives of a despondent population that deserves better.

If we don’t pass this message clearly to the political class, we will seem like we are part of this fuss that runs on our TVs every day.