• This has triggered speculation he is in-betweener in the alliance making talks. 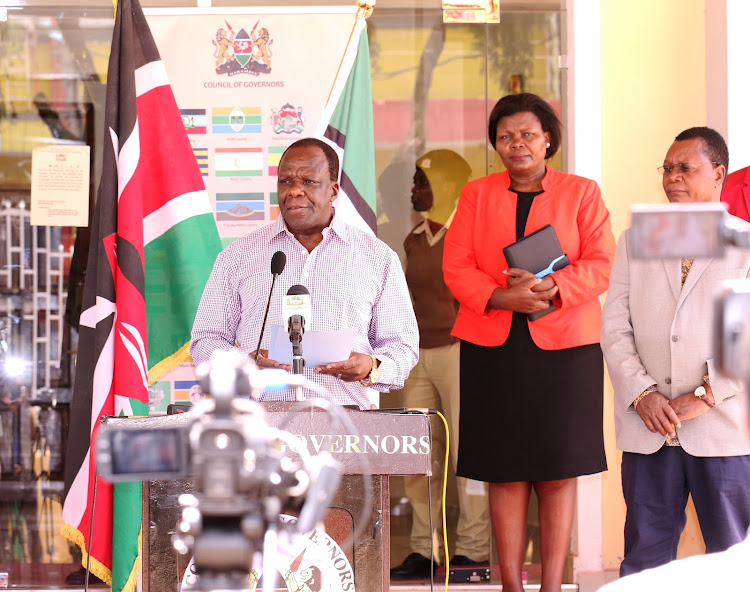 At the centre of talk of a possible Raila-Ruto alliance is Kakamega Governor Wycliffe Oparanya.

The 65-year-old politician has been in the news following meetings with Deputy President William Ruto and ODM leader Raila Odinga, triggering speculation he is an in-betweener in the alliance-making talks.

Governor Oparanya, the ODM deputy party leader, admitted he has met Ruto several times to discuss 2022 politics, but said the consultations should not be construed to mean he was planning to abandon his party leader, Raila.

DP Ruto corroborated this during a recent interview with Citizen TV, but denied he was in talks with Raila.

“I have met Wycliffe Oparanya not once. I have met with him probably five times, and of course more times when he was Council of Governors chairman. But I have met him to discuss politics five times,” Ruto said last Thursday.

He added that at no time had they discussed with him as an agent of Raila, including the last time when the ODM deputy leader said he informed his boss of the talks.

“We have discussed with him how we can work together and how he appreciates the hustler narrative and the bottom-up approach,” the DP said.

ODM admitted knowing about the Ruto-Oparanya meetings, saying "it is good to learn what your opponent is plotting and be able to get the best defence to counter them".

“You can be his enemy, but the Deputy President is my friend. Kenyans should allow leaders to express themselves and talk freely,” he told Ingo FM on Tuesday.

A survey, by research firm Infotrak between October-December 2019 and January 2020, ranked him and his Kwale counterpart Salim Mvurya as the best performing governors with a score of 82.3 per cent. Kakamega was ranked the best performing county in the agricultural sector.

The certified public accountant is an ODM insider, and has been in the political game since 2007, when he was elected Butere MP on the party’s ticket. He wrested the seat from veteran politician Amukowa Anangwe, a professor of political science no less.

The Kakamega governor was among ministers Raila appointed in the Grand Coalition Government in 2008. He was handed the Planning, National Development and Vision 2030 docket.

He would, however, in 2010 get into problems following the launch of the census report, when he admitted there had been controversy over what figures to release. The Kikuyu, the Luhya, the Kalenjin, the Luo and the Kamba were listed as the most populous ethnic groups but the Northeastern region said its numbers were reduced.

In 2013, he was elected the first Kakamega governor on the ODM ticket, a position he successfully defended in 2017. Notably, Western region is an ANC and Ford Kenya stronghold.

In January 2019, he was elected CoG chairman, which he defended unopposed the following year.

A survey, by research firm Infotrak between October-December 2019 and January 2020, ranked him and his Kwale counterpart Salim Mvurya as the best performing governors with a score of 82.3 per cent. Kakamega was ranked the best performing county in the agricultural sector.

The University of Nairobi alumnus is an adept planner and accomplished expert in public finance, a docket he holds in the Council of Governors.

Oparanya is serving his second and final term as governor, and has set his eyes on the presidency.

With Joho, they have submitted their bids for ODM’s presidential ticket, laying the ground for a battle with Raila.

Whether his presidential bid is viable is another debate — having lost the Matungu seat to ANC in his backyard.

However, his political movements are a likely pointer to the 'alliance that will shake the country', which ODM secretary general Edwin Sifuna promised.

DP hints at Kakamega governor's imminent exit that will throw ODM back to the drawing board.
News
3 months ago

I can work with DP Ruto, says Oparanya

Kakamega governor says Deputy President is his friend, not his enemy
News
3 months ago

“They have not had such talks. There is no coalition with Raila Odinga.”
News
3 months ago

ODM dispels reports that Oparanya is planning to leave Raila

In a statement, the party said the Kakamega governor is an ardent supporter of his boss and party leader
News
3 months ago
by ELIUD KIBII Subeditor and writer
Siasa
25 April 2021 - 04:00