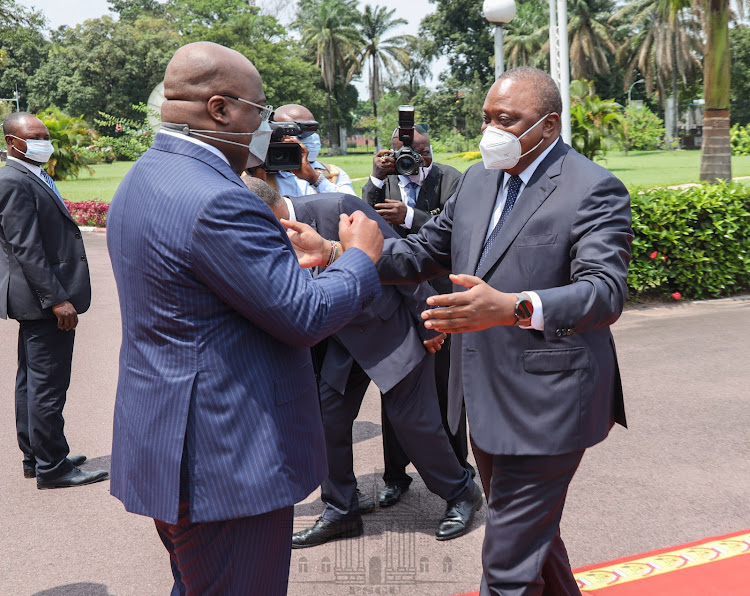 It was Farmaajo who first arrived in Kinshasa on Monday for an official visit. He held what Villa Somalia said was a bilateral meeting with Tshisekedi.

“We discussed further strengthening our bilateral relations. We also discussed the key role [the] African Union plays in the democratic development of Africa,” Farmaajo said after the visit.

He went on to say that he welcomes the AU to intervene in Somalia, despite last week telling off the international community over what he termed interference with its domestic affairs.

“I welcome [the] African Union to take a leading role in facilitating an election process in which every citizen elects their representatives through free and fair elections. All Somali stakeholders will actively participate in the dialogue on the future of our democracy,” Farmaajo said.

Tshisekedi is the African Union chairman.

The Somalia leadership is increasingly becoming isolated since the Lower House on April 12 extended the term of Parliament and Farmaajo's by two years, after which one-man, one-vote election will happen.

International partners, among them the UN, Igad, the EU, the US and Amisom, have opposed the move, instead calling for the implementation of the September 17 election model.

In the September 17 deal, parties agreed that the federal government and regional administrations would appoint federal and regional level electoral commissions to manage the poll.

Isolated, Farmaajo requested Tshisekedi's involvement in his capacity as AU chairman to facilitate negotiations with all the stakeholders involved in the Somalia crisis.

The Somalia leadership is increasingly becoming isolated since the Lower House on April 12 extended the term of Parliament and Farmaajo's by two years, after which one-man, one-vote election will happen.

Horn of Africa analyst Rashid Abdi, noting  Tshisekedi had just returned from Doha, said the deal would be for Qatar and DR Congo to mediate Kenya-Somalia tensions, and in return Nairobi extends recognition to Farmaajo.

This would, however, be complicated given Igad and Amisom, in which Kenya has huge influence, have rejected the extension.

It is against this backdrop that President Kenyatta’s visit was thought to have been linked with Farmaajo’s, with the possibility of talks facilitated by the AU chief.

But Farmaajo left a day before Kenyatta arrived.

“No. The President [Kenyatta] is visiting at the invitation of the President of the DRC, who is also the chair of the AU. So it is a state visit. It’s a very specific type of visit, [it] is not an official visit but a state visit. So it’s focused on bilateral relations,” Kamau responded to the Star's inquiry on Tuesday.

Speaking in Kinshasa ahead of President Kenyatta’s arrival, Kenya’s Ambassador to DRC George Masafu said the visit was aimed at cementing the “excellent bilateral ties between Kenya and the DRC” through enhanced trade and people-to-people interactions.

On Thursday, the two leaders witnessed the signing of a partnership agreement between Kenya Airways and Congo Airways.

The visit is aimed at cementing bilateral ties between Kenya and DRC.
News
3 months ago
by ELIUD KIBII Subeditor and writer
Siasa
25 April 2021 - 04:00