Ngilu: Sleeping giantess whose time is ripe for State House

She is a much sought after partner whenever an election approaches, as it now does.

• One of the mysteries of local politics is why the Ngilu train hasn’t gone all the way, or made more stabs at the presidency.

• The return of Ngilu to the tea meetings offers different formations another chance to have a look at a neutral candidate. 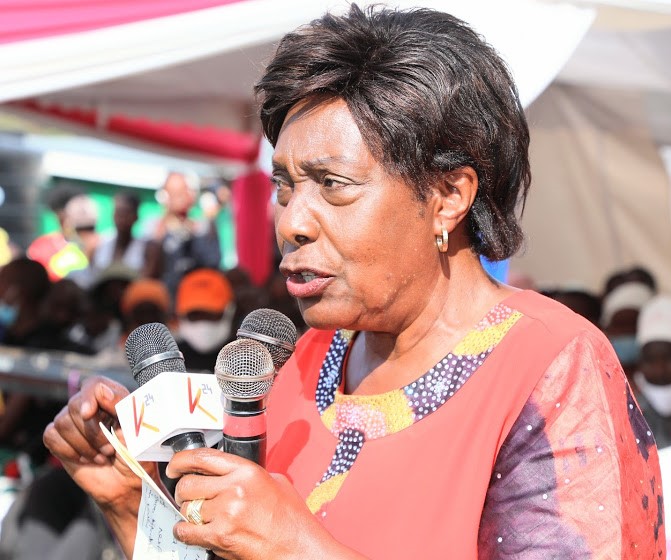 There was an interesting incident in the heat of the 1997 election campaigns.

President Daniel Moi was holding a reelection fundraising dinner at a Nairobi hotel one evening — a Sh1 million per plate exclusive fete.

The Social Democratic Party presidential candidate, Charity Ngilu, thought that this was a disrespectful show of opulence from looted taxpayers’ money, and decided she would storm the hotel and stop it.

Of course presidential guards were never really going to let any angry opposition leader come near the President and so, the best Ngilu could manage was a protest outside the hotel. She was injured in a scuffle.

In those days, the SDP was one of the most ideologically sound political parties, run by a leftist style politburo made up of three intellectuals Prof Anyang’ Nyong’o, Dr Apollo Njonjo and Justus Nyangaya. They called the shots, and the presidential candidate was supposedly beholden to their ideological fountain.

In the days following the incident, newspaper reports suggested the politburo was not happy with their candidate’s failure to show intellectual finesse in that incident. Reports also suggested Ngilu told the three wise men to “go give lectures at the university”.

For most neutrals, this incident cemented Ngilu’s place as a fighter who would easily move to the frontline if circumstances called for it.

For those who witnessed the electioneering period of 1997, Ngilu’s campaign wasn’t just one of the others. She ran a colourful campaign, whose symbol was a clock, for which fans coined the “Masaa Ya Ngilu” or “Masaa Ya Mama” phrase.

For neutrals, in a political platform where the first choice is usually the tribal formation, she was basically the alternative choice.

If you ask many, she should have clocked second when the final tally came, not the fifth she did behind Moi, Kibaki, Raila and Wamalwa.

If there ever was a time to dream about a female president in this land, that was the closest it came to fruition. By standing tall and hitting very high notes in that election, Ngilu gave a shot in the arm to all women candidates for whatever posts in subsequent elections.

Five years later, she and her two National Alliance counterparts Mwai Kibaki and Kijana Wamalwa would be accused of getting drunk on tea, in reference to their unending meetings over cups of tea, in a long drawn attempt to find a joint opposition candidate for the 2002 General Election.

When the candidate was finally found, it was Ngilu among the three NAK principals, who gave up her ambition, as Kibaki became the flagbearer and Wamalwa the running mate.

She, however, remained part of the cream of Narc and a member of its Summit. As with the Narc Summit in 2002, Ngilu would be part of the ODM Pentagon in the next election in 2007, as well as part of President Uhuru Kenyatta’s core team in the 2013 election.

Simply put, “Mama Rainbow” has played in the premier league in every election since 1997, and is a much sought after partner whenever an election approaches, as it now does.

About two weeks ago, the media’s intrigues enzymes were set ablaze by a meeting of some politicians in a Nairobi hotel.

The easier narrative in town was that they were Raila allies planning something ahead of 2022.

I have been a long-term admirer of both Mama Ngilu and Dr Mukhisa Kituyi, so it was exciting to see their faces topping the catalogue of big players at the gathering.

It was a reunion of sorts for most of those at the meeting, who have worked together in different regimes since 2002, and same political parties before that.

But as far as experience goes at this level, Ngilu was by far the most experienced political player at the meeting. Her presidential run in 1997, subsequent Cabinet portfolios and current position make her the unofficial principal of that lunch date.

I have argued here before that one of the mysteries of local politics is why the Ngilu train hasn’t gone all the way or made more stabs at the presidency. The times we live in make it even more imperative to ponder this.

There are at least three formations starting to show their hands ahead of next year’s crucial general election.

There is the DP Ruto axis, the Raila Odinga one, and the One Kenya coalition. It is still not clear if President Kenyatta will support one of the three, or will spring a surprise by throwing in a fourth.

Even though each formation appears bullish in words and deed, they all secretly want to join up with partners who can help them win resoundingly in round one.

An example is a talk a few weeks ago about a possible Raila-Ruto alliance, but after his TV interview last week, Ruto confirmed what many have always known; that the biggest headache of the Raila-Ruto pact would be who runs for president.

The two have hundreds of people around them who have invested time and resources in their runs, and who would much rather have their candidate dragged to the ballot on life support, rather that lose out on the gains that the two names hold.

This is why I submit that the return of Ngilu to the tea meetings offers different formations another chance to have a look at a neutral candidate. There are two distinct advantages she brings to the table.

One, as a woman, she offers a less polarising option compared to her male counterparts. And Ngilu doesn’t just come as an affirmative action candidate, but a pedigree barrier-breaker, who has been here before and come close.

Two, in a tribally charged environment where the big tribes come with the dubious reputation of scaring other big tribes out of their wits, Ngilu doesn’t come with the baggage of a tribal kingpin, especially given that her community doesn’t scare Kenya’s political elite that much.

If indeed her meeting with the other old reformers from their days in the trenches was meant to lay the groundwork for some sort of alliance in the coming election, I would propose to the gentlemen around that table that their first among equals was the only lady at the table.

Many things are yet to happen between now and August next year. There will probably be more surprises and shocks on the way.

But I dare suggest to the men who scheme and plot day and night over which of them will enter State House first, that it may be a good time to step aside for Mama Rainbow because she fits the bill and is less divisive than all of them!

Collins Ajuok is a political commentator