It's time Uhuru becomes his own man

Uhuru must quickly become shrewd and if need be, get rid of those around him causing this much consternation

• Sending mixed messages is counterproductive and sure invite to failure when haphazardly applied.

• This is what we have been living with since Uhuru told us in not so many words he had no interest or desire to have Ruto succeed him as president. 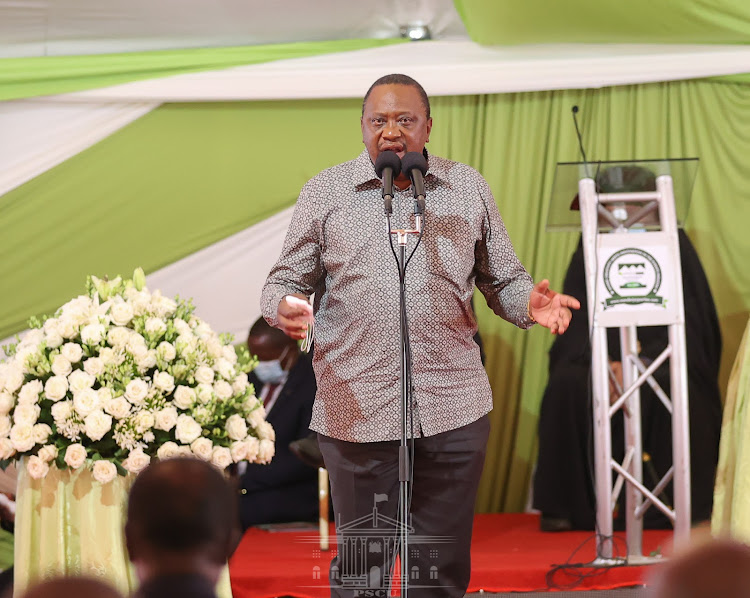 I was first introduced to President Uhuru Kenyatta during the G-7 consultative meeting at Safari Park in 2005 where I attended as an observer courtesy of the World Bank.

The introduction was done by Simeon Nyachae, who passed on in Febraury . In that brief chat, I was immediately stricken by how intelligent and articulate Uhuru sounded contrary to the stories I had read or heard about him.

Another opportunity came in 2010, shortly after passage of the much-heralded new constitution, this time at Prime Minister Raila Odinga’s home in Karen. I had gone to say goodbye to Raila as I was headed back to the US. Uhuru asked why I could not stay for the promulgation, which was to occur later that month. I told him I had to leave but planned to return for the momentous occasion, which I did.

In both instances, there was one thing that was inescapable and anyone who has met Uhuru confirms. That is he is a down-to-earth, humble man notwithstanding his upbringing as son of a president.

You do not have to personally know children of African presidents to know how snobbish and daft they are. Some examples that come to mind are the so-called “bad boys” children of the late president of Zimbabwe Robert Mugabe.

Yes, the country was not ready for Uhuru in 2002 and neither was it in 2013 as some would say but he became president. As the son of a president and Jomo Kenyatta no less, many waited to see how he would conduct his presidency.

Consistent with his laid-back style, Uhuru fell asleep on the wheel as Deputy President William Ruto crafted his 2022 presidential bid.

Yes, Uhuru is a humble man, but humility is no quality associated with strong leaders.

Neither is it a quality of any no nonsense leader who gets things done.

There is time for being humble and then there is time to be a leader and an effective one. One must be shrewd.

If Uhuru is naturally inclined to be humble and let those around him have their way regardless of consequences, it is time he took a crash course on how to become a shrewd leader and that time is fast running out.

Being shrewd means being decisive and making sure your decisions are put into effect without delay or any whining.

While sending mixed messages is a tactic some effective leaders use to confuse and befuddle in their momentary periods of indecisiveness, it is counterproductive and sure invite to failure when haphazardly applied.

The latter is what we have been living with since Uhuru told us in not so many words he had no interest or desire to have Ruto succeed him as president.

Almost two years ago, Uhuru told us his choice for successor would be a surprise. To date, nobody knows who that person is. In fact, a good case can be made that even Uhuru does not know.

But the “system” does.

To be sure, Uhuru has given strong hints he does not mind and may, in fact, back Raila for 2022. However, his dilly-dallying for this long is soon crossing a point where Uhuru himself may be surprised who our next president is.

It does not have to be that way. Uhuru has enough tools and goodwill to command an outcome as to who should succeed him.

And if we accept as genuine his declaration that it is time we ended this rotation of the presidency between two communities, then the natural successor should and ought to be only one person of all those interested in vying.

To make sure that happens, Uhuru must quickly become shrewd and if need be, get rid of those around him causing this much consternation and confusion as to who should succeed him.