Presidential aspirants meetings are psyops, so who is the invisible gorilla?

• The meeting between Governor Oparanya and DP Ruto was credible enough to make people believe it was sanctioned by Raila to scout a possible political realignment. 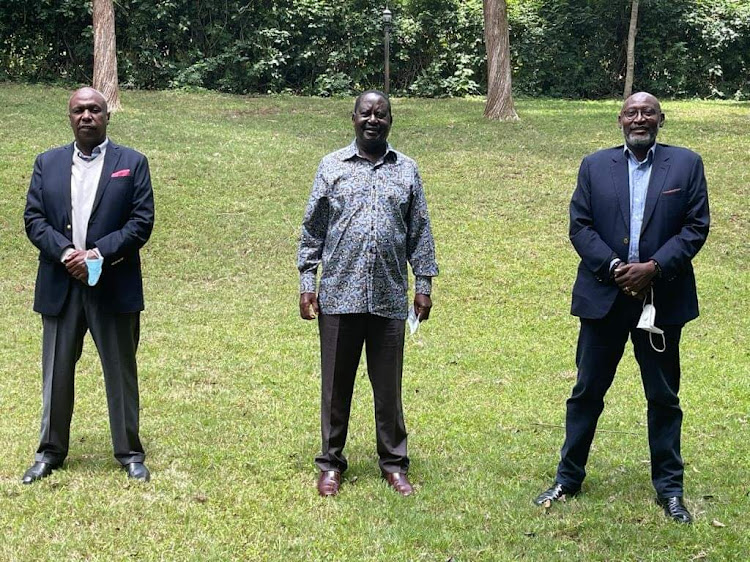 They say a picture speaks a thousand words. But does it really?

A social experiment was conducted in 1999 by two researchers, Drs Daniel Simons and Christopher Chabris. In this experiment, they divided their subjects into two groups, and asked them to watch a video of two teams playing basketball.

One group was tasked with keeping track of the count of the bounce passes made, while the other group was asked to count the number of aerial passes. Midway through the game, a gorilla mascot sauntered into the basketball court, faced the camera, thumped her chest, and walked away.

After the video was over, the researchers asked their subjects if they noticed anything out of the ordinary during the basketball match. Fifty per cent reported they did not notice anything unusual.

The two researchers further conducted the same experiment to other subjects who were familiar with the first experiment. After the match, 100 per cent of them said they noticed the gorilla mascot because they expected it to make an appearance. However, only 30 per cent noticed that the curtain background changed colour in the course of the game.

This is known as inattentional blindness. It is a psychological lack of attention where one fails to see things that are unexpected, obvious and quite often salient.

In the last couple of weeks, various photographs of political leaders meeting in their lavish abodes, or jointly inspecting government projects, have been liberally splashed in our print, electronic, and social media for our consumption, persuasion and conclusion, as to what their joint appearance means. Our conclusions have spun across the spectrum from betrayal to realignment. In street lingo, this is known as maisha ni kujipanga.

The subsequent narrative that we have believed has been informed by our confirmation bias. This is the tendency to search for, interpret, favour and recall information in a way that confirms or supports our beliefs or values. And depending on which political affiliation we support, these photographs have either rekindled or crushed our political outcome hopes.

In reality, a photograph only documents a second in time. This is why we write captions to provide additional information about the photograph that cannot be ascertained simply by looking at the image. The captions, too, cannot be fully relied on because they communicate the conveyor’s message, which also betrays his confirmation bias.

Begs the question, who is the invisible political gorilla mascot in these photographs? Has our inattentional blindness been so heightened by our confirmation bias, that all we have been fixated on, is who is a better chess player, who is fooling who, or who is testing which waters? Are we too naïve to believe that these meetings are only held between those that appear in these photographs?

I submit that these deliberate and carefully orchestrated optics, are not commemorative moments of scouting for strategic political alliances. They are PSYOPs.

A PSYOP is a psychological operation that is crafted to convey selected information and indicators to specific audiences to influence their emotions and reasoning. Their purpose is to induce or reinforce a certain desirable behaviour that is favourable to the PSYOP curator.

Successful PSYOPs are based in partial reality. PSYOP curators assess the information needs of a certain target population and craft messages that control the narrative, the middle ground and the lie, to align with their confirmation biases. They also ensure these messages emanate from a source that is associated closely with the PSYOP curator to reflect a believable view point.

For instance, the meeting between Kakamega Governor Wycliffe Oparanya and Deputy President William Ruto was credible enough to make people believe it was sanctioned by Raila Odinga, and that he had sent him to scout a possible political realignment.

Similarly, the President's brother Muhoho Kenyatta meeting with Raila Odinga made people believe the handshake is still going strong. Based on our confirmation bias, we believed what the photos were meant to convey to us.

So who is this PSYOP curator? My submission is that he is the invisible gorilla mascot. Allow me to unpack this for you.

The political landscape is organised in a nested circle called the selectorate. Every political leader’s power, assumption and longevity in office, is dependent on the balance of power among three key groups of selectorates.

The outer circle is called the nominal selectorate. This includes everyone in the nation that has a legal right to elect their political leader, and is eligible to vote. They are also called the interchangeables aka Wanjiku, because they can be swayed to cast their vote to the most persuasive side. The interchangeables are made to feel very important in political rallies. Sadly, this is a lie. All they have is a tiny toe-hold into the nation’s political course.

The middle circle is called the real selectorate. This is the group of people that actually selects the leader. They are also known as the influentials. For example, in China, the president is selected by the voting members of the Communist Party. Likewise, in Saudi Arabia, the prince succeeding the throne, is selected by the ruling royal family also known as House of Saud.

The inner circle is called the winning coalition or the essentials. This is the most important group of people that ultimately decides who rules the country. Their decisions are made in boardrooms. They are a subset of the influential and are also the PSYOP curators.

Essentials have no permanent loyalty to any political faction. They transcend tribal and cultural barriers. They are non-partisan, non-ideological and non-denominational. They are self-organising and play by their own rules, while hiding in plain sight. Their nature is parasitic, purely extractive, and the power they exercise is not donated to them by the interchangeables.

Their support is imperative if a leader is to acquire, and more importantly, survive in any political office. Survival is contingent upon continuous doling out of private goods to them, with little concern about providing public goods to the interchangeables.

Their support translates to an assured victory because they give the required edge of one candidate over another. They have the power to install and depose those in office, and direct policy. And the scariest part is that they, the office aspirants and the office holders, all know it. Often times, the essentials are business oligarchs and security forces.

Every political leader answers to the essentials. If he loses the loyalty of a sufficient number of members of this group, he can be easily dethroned by a challenger to replace him in office.

If you have ever wondered why leaders who enable an environment where peace and prosperity thrive don’t last long in office, while those who facilitate corruption, war, conflict or misery endure for long in political office, well now you don’t have to wonder any more.

These PSYOP curators aka invisible gorilla mascots aka the essentials, will continue to keep us preoccupied with musical chair optics of presidential aspirants meeting each other today, and different ones tomorrow, while they operate behind the scenes to determine the next president, based on their individual interests.

Meanwhile, you and I the interchangeables, perpetuate enmity along tribal, cultural and religious lines, based on our support for the individuals who appear in these photographs. As Paul in Galatians would ask, You foolish Galatians! Kenyans! Who bewitched you?

If the truth shall kill them, let them die – Emmanuel Kant

Meeting comes amid rumours of a possible reunion between Raila and Ruto.
News
2 months ago

Why Uhuru won't let go of his handshake partner Raila