Somaliland: An emerging beacon of democracy in East Africa

Somaliland elections have remained and continue to be free, fair, and peaceful.

• Somaliland has continued to aptly demonstrate that it is a free and democratic country.

•  Its culture of democracy goes back to the liberation movement era where the SNM wrote a constitution and balanced the structure of leadership. 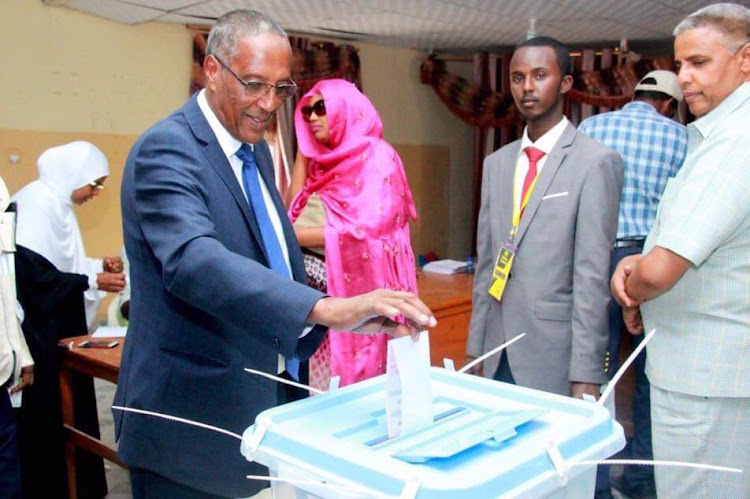 PRESIDENT: Muse Bihi Abdi, the candidate for the ruling Kulmiye Party, casts his vote in the November 2017 presidential election. He was elected as the fifth president of Somaliland with 55 per cent of the popular vote
Image: HANDOUT

Africa is often described as less democratic. Although such generalisations might have their own shortcomings, this becomes true when you analyse the history of the continent, in particular, the post-Independence era.

The continent has struggled to attain a viable democratic system, multi-party politics, political freedoms and civil liberties. The circumvention of term limits by the African leaders has become widespread and despite several countries making significant progress in democracy and elections, many others are performing poorly.

Where these challenges remain, it doesn’t mean there are no success stories. Somaliland, the former British protectorate in the Horn of Africa, has in the recent past attracted the attention of the international community for building an effective democratic system only matched by a few other countries in Africa.

This is despite its volatile geographic location bordering Somalia, which is one of the most dangerous and chaotic countries in the world, [according to the Travel Risk Map].

Somaliland, officially known as the Republic of Somaliland, was the 13th nation to become independent in Africa by a Royal proclamation of her majesty Queen Elizabeth II on June 26, 1960.

This independence was short-lived because of its unification with Somalia to form the Somali Republic, envisioning to also encompass other Somali territories in the Horn of Africa to create the Greater Somali Republic.

The concept of Greater Somalia extends back to the beginning of the 20th century, and the idea was to unite all Somali-speaking nations, comprising regions in which ethnic Somalis live or historically inhabited. This covered Somaliland, Somalia, and Djibouti and also the Northeastern Province of Kenya and the current Somali state of Ethiopia.

That dream failed to work when Djibouti became independent and decided not to join the Somali Republic.

Somaliland and Somalia had differences at that time as a result of injustice and despotism over Hargeisa, which triggered atrocities against the people of Somaliland in which a 250,000 people died and their cities were leveled to the ground by the Somali forces.

This led to the emergence of a group of students, business people, former civil servants, and former politicians to form the Somali National Movement, which then turned into an armed liberation front that defeated the dictatorial regime.

On May 18, 1991, the people of Somaliland decided to withdraw from the union, reclaim their independence and rebuild their own country through a homegrown peace-building process and a hybrid state formation system. This became the beginning of a significant success story in Africa and the building block of a democratic nation.

Somaliland’s culture of democracy goes back to the liberation movement era where the SNM wrote a constitution and balanced the structure of leadership.

It was comprised of the chairman and a central committee that elects the chairman to practice values of democracy right at the frontline of war.

SNM, which was the cradle of current Somaliland, conducted six general assemblies and elected five different democratically elected leaders in eight years all of whom had served a full term in office, to be replaced by elected successors.

When SNM liberated the country in 1991, it ruled the nation for two years as per their constitution and handed over the leadership to the traditional leaders who then approved a national charter and elected new leaders.

In 2oo1, Somaliland’s democracy reached a new milestone when it promulgated a constitution that transitioned the country into a multiparty system. This laid the foundation of the many elections this unrecognised republic uninterruptedly has conducted ever since.

This resulted in 332 elected councillors for different districts and regions of Somaliland and three national parties — the United Peoples' Democratic Party (UDUB) the ruling party at the time, and two opposition parties: Kulmiye Peace, Unity and Development Party (Kulmiye) and the Justice and Welfare party (Ururka Caddaalada iyo Daryeelka0) or UCID.

In April 2003, four months after the local council elections, Somaliland conducted a presidential election that is considered to be among the global polls with the slimmest margin in the world of only 80 votes.

Voting occurred as planned on April 14, 2003, and in close to 1,000 polling stations voters chose between three candidates in an orderly process. International observers from the US, Canada, Sweden, the UK, Ethiopia, and South Africa described the elections as “among the freest and most transparent democratic exercises ever staged in the Horn of Africa”.

Despite the close margin in the outcome, the losers accepted and conceded.

In September 2005, 246 parliamentary candidates vied for 82 seats in the House of the Representatives in an undertaking that involved 982 polling stations, 1, 500 ballot boxes, 1,3 million ballot papers, 6,000 party agents, 3,000 police officers, 700 domestic observers, and 76 foreign observers from Canada, Finland, Kenya, South Africa, the UK, the US, and Zimbabwe. All confirmed the election to be free and fair.

On June 26, 2010, the people of Somaliland went to the polls for yet another presidential election, where an opposition candidate won against an incumbent in an election considered as credible by local and international observers.

A peaceful transfer of power, hardly seen in Africa, followed.

Somaliland elections have remained and continue to be free, fair, and peaceful. The nation had another local council election in 2012 and a challenging presidential election in 2017. Twenty-seven  countries deployed observers to witness the process of voting in 1, 624 stations.

“Throughout the election period, Somalilanders demonstrated their support for the rule of law and constitutional process, voting peacefully and in significant number. The mission applauds this ongoing commitment to peaceful participation in an impressively open electoral system,” observers said.

Somaliland is back to the polls this year. It is scheduled to conduct a self-sponsored joint parliamentary and local council elections where nearly 1,000 candidates are running for MP and city councillor positions.

With reference to the election track record and the successful democratic values practiced by Somaliland, this nation is exemplary for many countries in Africa and the Middle East as a beacon of democracy, political freedom and civil liberty.

Ismail is a sociologist and social scientist based in Nairobi. He is a graduate student specialising in Disaster Management at the University of Nairobi. [email protected]

Why Somaliland deserves recognition as a republic

The birth of Somaliland is an inevitable result of a distinct colonial experience.
Siasa
5 months ago

Kenya, Ethiopia and UAE have been partners with citizens living and working there.
News
6 months ago
by ISMAIL SHIRWAC
Siasa
10 April 2021 - 05:00