Increasingly, professionals have dropped the integrity ball and ignored Article 10 on good governance.

• Whatever measure government takes to contain corruption has been met with skepticism, apathy, protest or rejection due to the deficit in trust.

• Trust in government is the foundation of government legitimacy and sustainability of a political system. All government has to do is keep thieving fingers out of the public till because the public is watching! 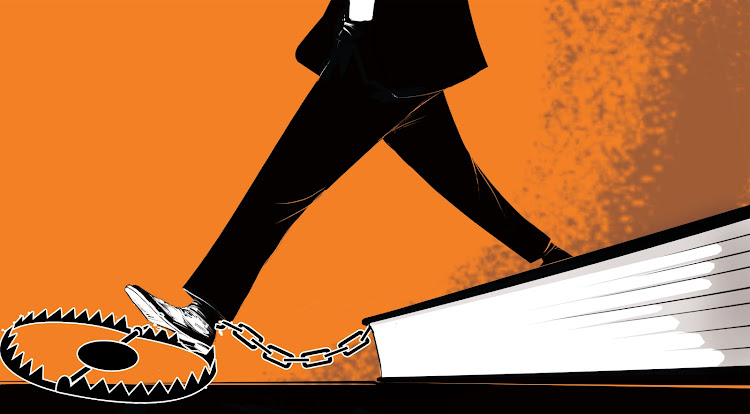 I TRIED: In 2016, during the Governance and Accountability Summit, the President expressed wretched feebleness and “accepted” that indeed Kenya was facing a deadly pestilence — corruption and fraud - and that he had done his best.
Image: OZONE

The theme was 'Building Public Trust Through Effective Governance and Leadership, again a very perceptive choice, which must’ve been provoked by the settled conclusion in public perception that poor governance in organisations is the foster baby of mediocre leadership.

That an institution of professionals in private and government sectors can find it worthwhile to open up on a taboo subject must be a statement that poor governance and run-of-the-mill leadership even in corporations are ruining reputations and eating into profit margins. Why?

Public trust, which might as well pass for waning confidence in the performance of private and government institution operations, has become a needle in a haystack; much sought but difficult to find.

But I jump the queue: Let’s decipher what governance and leadership — two concepts that occupy public space — are all about and then why public trust remains a moving target. Our location is Kenya.

Domesticated, it means governance is about the decisions and actions of the people who run a school, a hospital, a business or a nation.

Simply, governance is the way decisions are made in the family, villages, towns, cities, counties and country. Our concern is in the country.

How responsive are government actions to these infinite principles despite Article 10 of the Constitution that demands public officers foster good governance, integrity, transparency and accountability values and principles binding all Kenyans?

Governance being the way a country does things, we are bound in Kenya to do things according to the Constitution and the rule of law.

The rule of law is a key driver of trust in government. That's why governance is about the four Ps — People, Purpose, Process and Performance.

However, the acts of omission and commission by professional cadres in government demonstrate they don’t care governance is also how government decision-making affects people.

Our public officials, mainly professionals in corner offices, often lose the plot when they indulge at the expense of the people. They bend the rules — the way things are done — to benefit themselves.

They aren’t involved in governance but in advanced corruption.

The keynote speaker at ICPAK, ANC leader Musalia Mudavadi had quite some stimulating simulations of recent heists that provide fodder for public mistrust:

Laptop of dishonour: A government sets out to equip every Class 1 child with a laptop. It doesn’t happen. No one owns up to what happened to the budgetary allocation. It simply vanished in the thick air of a corrupt bureaucracy and private business vendors — Kenyan style.

Seven million jobless youth: A government promises five million jobs a year but it never happens for nine years. Instead, a thin stew of Kazi Mtaani was thrown in last year for youth to slash grass on the village and estate paths. Seven million graduate youth at various levels are projected jobless.

Dumpsite stadiums: The government promises a stadium in every county but now, abandoned sites resemble dumpsites, while construction of many others never commenced.

Quarries for dams: The same fate befalls the construction of dams. Many are ugly excavation sites that are better off re-named quarries, another shameful monument of corruption.

Blackout Kenya Power: There was the venerated Last Mile Electricity Connectivity. Metres were installed in mudwalled shacks. Light only shown when pictures of notables were taken at installations. The rest of us must make do with blackouts. And KPLC has a Sh16 billion hole the Ministry of Energy can’t fill. Of course, someone made a killing supplying concrete poles at a handsome inflated cost. Meanwhile, despite minting trillions, monopoly KPLC is technically insolvent.

Leaking KPC: Kenya Pipeline Company builds a sleaze-driven jetty in Kisumu to nowhere, because there aren’t corresponding jetties in either Tanzania nor Uganda. It is a controversial white elephant. No one cared about a feasibility study. Before this, KPC built an oil pipeline from Mombasa to Nairobi without insulating it against siphoning. Billions in client oil got lost. The contactor was paid billions for contract violation.

SGR lunacy: A railway to nowhere is built on an expensive borrowed Sh364 billion. The government defies expert warnings on viability and is saddled with a loss-making SGR and is in default of the loan. It turns out an essential government entity, KPA, was given out as collateral.

Covid-19 Billionaires: The country is in panic over the coronavirus pandemic. Tenderpreneurs walk in and out of Kemsa with extraordinary billions worth of PPE tender awards, for which they aren’t qualified. Some deliver substandard PPEs; the clever ones deliver air. All are paid promptly. The President orders investigations to nab the culprits in 21 days. A year later, they’re walking free.

The loans binge: The government goes 0n an unsustainable borrowing spree. Warnings are offered but it borrows more. The debt ceiling of Sh7 trillion is breached and Parliament hurriedly regularises the breach. Government defaults but embarks on more borrowing to pay accruing interest. Another breach of the Sh9 trillion ceiling is imminent. Government resorts to punitive taxation of citizens battered by the Covid-19 pandemic.

Mudavadi concluded that the common denominators in all the theft include that the decision-makers are professionals, public officers and private business are involved. The dealings are all graft-driven, a criminal mindset governs decision-making, Article 10 on good governance, integrity, transparency and accountability is inapplicable, public resources are lost and public trust is eroded.

Clearly at some point, public officers have lost their call to integrity and obligation to be accountable, transparent and strictly adhere to the rule of law.

Conversely, if governance in the private sector is the practice of the board of directors coming together to make decisions, and the direction turns out to be about stealing, then there is a paucity of governance virtua and the board duties of oversight and decision-making are not about governance but piracy.

Increasingly, professionals have dropped the integrity ball. ICPAK's theme was bold given instances where the accountancy profession has looked the other way and led to tremendous credibility crisis in business practices.

The issue of creative accounting is an albatross weighing down professionals who are expected to carry honesty and integrity as the badge of honour.

It follows that the government does not corrupt itself. For every scandal, there is private sector involvement and, therefore, a professional hand in it. It means we’ve sung the hymn against corruption until we’ve lost our voices with little success in prosecutions. The Judiciary, too, has made little progress on forfeiture orders of unexplained assets.

When there’s maleficence in government, then the loss of public trust is complementary in equal measure.

Whatever measure government takes to contain corruption has been met with scepticism, apathy, protest or rejection due to a deficit in trust. It follows that trust in government is the foundation of government legitimacy and sustainability of a political system. Trust is essential for governments’ ability to govern without resorting to coercion.

A high level of trust in government increases the efficiency and effectiveness of government operations.

All government has to do is keep thieving fingers out of the public because the public is watching!

•Raila said struggling institutions were all suffering from “serious mismanagement” •He said individuals chosen to spearhead state bodies should be ...
Business
1 year ago

Part of Uhuru’s failures is to accommodate his own opposition.
Siasa
1 year ago
by KIBISU KABATESI
Siasa
04 April 2021 - 13:58