• Raila and Ruto worked together in the Pentagon — a powerful five-member ODM summit.

•Raila and Ruto men, however, downplayed the possibility of the two leaders coming together to counter the One Kenya Alliance 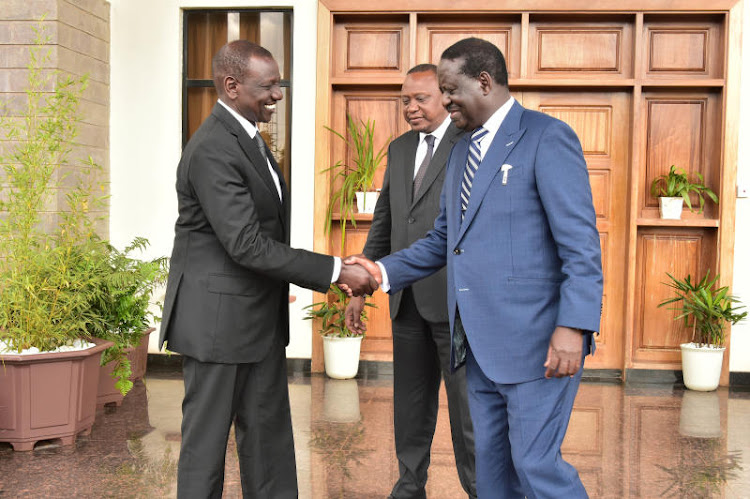 Speculation is rife the former Pentagon stalwarts-turned-foes could be warming up to each other after they found themselves both pushed aside in the Uhuru succession intrigues.

The duo find themselves on the same side after reports emerged alleging the President or his close associates are pushing for a successor who is neither Ruto nor Raila.

DP Ruto triggered the speculation last week after he expressed his openness to working with the former Prime Minister ahead of next year's general election.

On the other hand, Raila’s ODM was cautious but sending out feelers.It  appeared to firm up the assertion when it announced plans to form a ‘tsunami’ alliance after the party was left out of the One Kenya Alliance, said to be enjoying the President's blessings.

HOW IT COULD WORK

If the two were to come together, pundits say  they will have to make sacrifices. Either Ruto steps down for Raila to run for President  in 2022, then hands over power to him (Ruto) in 2027.

Or Raila plays the kingmaker role and signs a pact for a 50-50 share of  government slots where the ODM boss will front his people. The argument is that Ruto cannot run for Deputy President again and the chances of Raila playing second fiddle to him are very minimal.

"Both of them are hardliners. It will not be easy for them to agree but it that were to happen, then they will have to make major concessions, sacrifices, otherwise, Uhuru will have his way," analyst Elias Mutuma said.

He has humiliated and bitterly fallen out with Ruto, who was initially seen as his heir apparent. The DP's allies say he was betrayed.

The President has also evidently abandoned his handshake partner Raila as it had been expected the handshake would culminate in an endorsement.

Raila's elder brother in August last year said that since ODM has what he called 'the system', State House was a sure bet.

"We are now with Uhuru Kenyatta who is holding 'the system'. So with 'the system', plus our votes, which are always more than the others, what else [is there]?" Oburu asked.

Speaking at the same event, Alengo Usonga MP Samuel Atandi of ODM said, "We are going to power in 2022 and the route is through President Uhuru Kenyatta."

It was widely expected the President could back Raila to end political hatred emanating from post-Independence period during the days of their fathers, Jomo Kenyatta and Oginga Odinga, who were president and vice president, respectively.

But things are fast changing.

Recently, Raila’s confidant, Siaya Senator James Orengo, alleged a plot by some civil servants in the President’s circles to sabotage Raila and stop him from ascending to the presidency next year.

“I want to warn some top civil servants paid by taxpayers’ money to stop meddling in the country’s political leadership,” Orengo said early last month, sparking a storm in the handshake camp.

Political pundits say the quartet in the One Kenya Alliance does not have political clout and might to counter Raila and Ruto's ‘tsunami.'

This, they argue, would complicate or even thwart Uhuru's plans to have a hand in his successor in the 2022 General Election.

“The four are minor parties nationally, and their leaders are not crowd pullers like Ruto and Raila,” Prof Macharia Munene, who teaches at USIU, said.

Besides pulling crowds, Prof Munene said  Ruto and Raila, are combative and persuasive — attributes that have earned them a near-fanatical following in most regions.

Herman Manyora, a lecturer at the University of Nairobi said Uhuru’s plans to shape his succession would come to a halt if the DP and the former Prime Minister join forces.

“If the two were to work together, it will bring Uhuru’s succession plans to an end because nobody can contest against the combined forces of Raila and Ruto,” Manyora reckoned.

He added, “Here, we shall have two people terribly betrayed and they will not give him a chance, if they get power. Uhuru’s legacy will disappear.”

Political observers Elias Mutuma and Mark Bichachi said the President would have no options left if Raila and Ruto were to form an alliance.

“If that happens, of course, it means other alliances, the One Kenya Alliance, would be dead on arrival. They would stand no chance,” Mutuma said.

Bichachi said, “If somehow, by some very funny miracle the two join forces, then there is no force left in Kenya that can beat them."

Rongo MP Paul Abuor of ODM said a Ruto and Raila ticket would  be a political tsunami.

Speaking in Kuria East subounty during the burial of former MP Shadrack Manga in Nyamtiro village on Monday, Abuor said talks are ongoing for the pact, which will be a political tsunami that will change the country's political landscape.

Abuor, who represented Raila at the funeral, said the ODM leader will "soon return with a renewed energy and zeal to drum politics of development and succession in Kenya.”

Raila had been ailing after contracting Covid-19.

“We know that there is a Cerelac alliance being formed in the name of One Kenya Alliance but it is just a matter of time before we make a bigger pact,” Abuor said.

“Kenyans should brace for a political tsunami when Baba recovers. A possible realignment is in the offing and it will take everyone by storm,” he added.

Raila and Ruto worked together in the Pentagon — a powerful five-member ODM summit akin to a politburo — and arguably the most potent political machine in Kenyan history.

Narc leader Charity Ngilu also joined the team though it retained its numerical identity, the Pentagon.

Raila was the leader of the team that nearly toppled President Mwai Kibaki in the 2007 General Election, whose results were fiercely contested sparking the post-election violence.

At least 1,300 people were killed and about 600,000 others displaced from their homes and property of unknown value was destroyed.

Raila and Ruto men, however, downplayed the possibility of the two leaders coming together to counter the One Kenya Alliance.

“It is impossible for that to happen,” Nandi Senator Samson Cherargei, an ally of the DP, said.

"We as as allies of the Deputy President support his candidature for the  presidency, the alliance we are building now is one of all Kenyans of goodwill and the hustler nation,” he added.

While insisting Raila cannot join Ruto, Gem MP Elisha Odhiambo, a confidant of the ODM leader, said the former Prime Minister cannot talk of forming an alliance until the BBI referendum is done and dusted.

“One month in politics is a very long time but what I think for now is that the President and Raila are navigating the boat of BBI. Until it docks, that is when a political formation will happen,” he said.

Last Thursday, Ruto and Raila’s ODM signaled they could work together again ahead of the 2022 polls.

Ruto for the first time praised Raila’s credentials, saying he is the only politician who had managed to build a national party just like Jubilee.

Ruto’s comments were a rare departure from his previous salvos, dismissing Raila as a “tribal chief” and an undemocratic demagogue hell-bent on building a political cult.

“The only other party we can talk of that has a national following and a national image is ODM,” Ruto said as he dismissed other rival parties as tribal and ethnic-based.

The DP, who spoke on Jalang’o TV and Citizen Radio on Thursday, said he had no problem reuniting with Raila, if he agreed to subscribe to his hustler nation movement.

“We have our plans and if he (Raila) believes in us, we will agree and work together,” Ruto told Radio Citizen.

His remarks come barely three weeks after Raila's elder brother Oburu Oginga said the ODM leader might work with the Deputy President in the 2022 elections.

Soon after Ruto’s remarks, Raila’s ODM has announced it is in the process of crafting a new political alliance that will shake the nation, sparking speculations of a possible alliance with Ruto’s UDA.

“The post-BBI alliance ODM is working on will be fresh, strong, vibrant and packed with men and women who can stand on their own and give birth to a new nation post-BBI,” secretary general Edwin Sifuna said.

The tentative feelers by both sides could coalesce into a formidable machine.

Manuel Odeny contributed to this story