• Uhuru and Raila had tentatively scheduled the referendum to amend the Constitution in June after the President signs it into law before August — just one year to the 2022 General Elections.

• Some of the changes contained in the BBI Bill, such as creation of the 70 new constituencies, must be effected a year to the general elections. 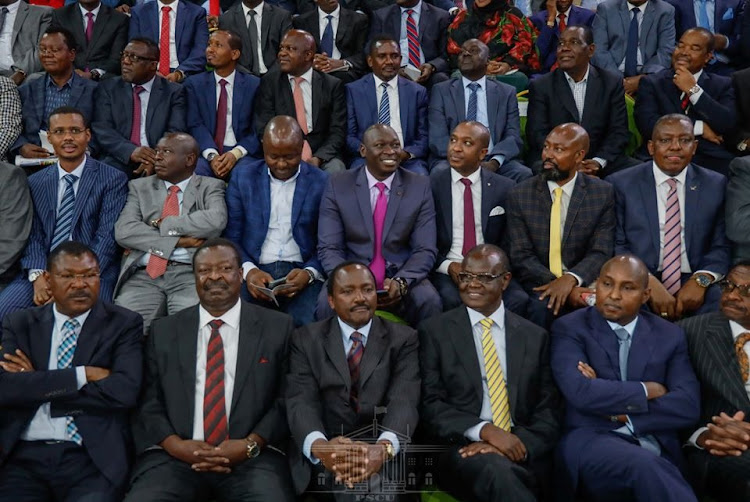 Party leaders Musalia Mudavadi (ANC), Kalonzo Musyoka (Wiper) and Moses Wetangula (Ford Kenya) with other leaders during the BBI launch at the Bomas of Kenya on Wednesday, November 27, 2019.
Image: PSCU

The window for holding a referendum before August is closing and politicians banking on the BBI for their 2022 succession matrix could be forced back to drawing board.

Top politicians scheming to succeed President Uhuru in next year’s general election have been building their line-ups according to the expanded Executive envisioned in BBI.

However, recent directives by the President, including a ban on political gatherings and Parliament taking a one-month break, could throw the BBI calendar into disarray.

The limping economy is likely to worsen because of the Covid-19 containment measures announced by the President on Friday last week. The economic squeeze also puts the government at a crossroads.

This cocktail of push and pull over the BBI Bill witnessed in Parliament and the economy fraying could significantly alter the roadmap to the referendum unveiled by the President and Raila in Naivasha next year.

Uhuru and Raila had tentatively scheduled the referendum to amend the Constitution in June and the President was to sign it into law before August— just one year to the polls.

Some changes contained in the BBI Bill, such as creation of 70 new constituencies, must be effected a year to the August 2022 General Election.

“If a general election is to be held within 12 months after the completion of a review by the Commission, the new boundaries shall not take effect for purposes of that election,” the law says.

Kipkelion West MP Hillary Kosgei says it would be insensitive for any leader to push for a referendum “when the economy is in ICU and just 16 months to the next general election”.

Speaking to the Star, Kosgei said it is time politicians start planning their 2022 politics based on the current Constitution.

“If you have been in Kenya for long, the writing is clearly on the wall, the referendum will not happen. Time has run out,” he said.

Kosgei said the Independent Electoral and Boundaries Commission should be allocated money to start preparing for the general election.

“It will be absurd for us as a country to take  loans from international markets to fund a referendum that is not necessary now. Priority should be how to rebuild our economy that is doing badly,” he said.

On Tuesday, Kakamega Governor Wycliffe Oparanya, who is also Raila's deputy in ODM, termed the BBI referendum untenable because of the economic slump occasioned by the pandemic.

The BBI Constitution (Amendment) Bill, 2020 has proposed among other things the expansion of the Executive to include a prime minister and two deputies —in addition to the president and the deputy president.

The deputy president will remain the President’s principal assistant, while the prime minister will run government business in the House.

Apart from the opposition leader, the remaining five powerful positions will be appointees of the winner of the presidential contest, seats which will be dished out to his or her inner circle —or dangled as rewards.

Raila is actively courting several regional heavyweights for his line-up next year.

In his new arithmetic, he is said to be eyeing governors Kivutha Kibwana (Makueni) and Kitui's Charity Ngilu and former UNCTAD boss Mukhisa Kituyi.

Others on his list are outgoing governors Hassan Joho (Mombasa) and Wycliffe Oparanya (Kakamega) and former Gatanga MP Peter Kenneth.

However Joho and other Coast governors — Amason Kingi (Kilifi) and Salim Mvurya (Kwale) — are working on their own party and it is understood they could team up with the new One Kenya Alliance.

They are also banking on BBI proposed changes as they push their names on the chessboard.

Though Deputy President William Ruto is not a supporter of the BBI, were the changes be effected, he is on record saying the positions would still help him as he has regional allies he can reward.

Uriri MP Mark Nyamita said Parliament still has time to debate and pass the BBI Bill, then forward it to the IEBC to conduct the plebiscite.

“Parliament has just taken a break of about one month so there is still room to have the referendum. The proposals in the Bill are meant to address some critical issues that have been bedevilling this country every election cycle,” he told the Star on phone.

Lugari MP Ayub Savula (ANC) acknowledged the wars in moribund Nasa could have implications for BBI, his Ford Kenya Party and Kanu thR had resolved to team up to support the Bill.

“We will no longer trust ODM, they are the problem we have in this country. They are unhappy when other leaders unite and they have been doing everything possible to sabotage other parties and their leaders,” he said.

He said there is still time to make the changes ahead of 2022.

Governance expert Kaburu Kinoti said, however, the economy was about to sink further and the measures announced by the President will render many more Kenyans jobless.

Kinoti also said the case pending before a three-judge bench could spell doom for the referendum.

“So many things are working against a referendum in this country. I don’t foresee it this year. The measures announced on Friday will see more Kenyans jobless and any sane person cannot prioritise a referendum when Kenyans are hurting,” he said.