Scapegoating of refugees endangers not just them, but Kenyans too

The timing of Matiang’i’s announcement is not a coincidence, coming as it did immediately after oral submissions in the case Somalia has filed at the ICJ

• UNHCR has been given 14 days to come up with a roadmap on the closure of Dadaab and Kakuma refugee camps.

• Interior CS Fred Matiang’i is threatening to dump the refugees back in warring Somalia, where the vast majority fled. 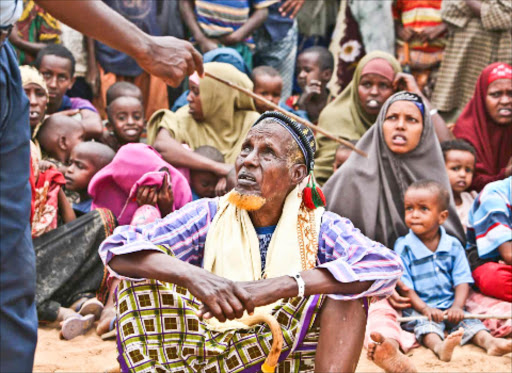 AT RISK: Refugees at the Dadaab camp
Image: FILE

One would be forgiven for thinking the Kenyan government has something against refugees. Reflexive, ill-advised and even callous decision making at the highest levels of the Uhuru Kenyatta administration has left hundreds of thousands of the most vulnerable facing the prospect of being forced back into the war zone they had fled from.

In the latest reprise of threats and ultimatums that have been routinely issued by the government since 2013, the UNHCR has been given 14 days to come up with a roadmap on the closure of Dadaab and Kakuma refugee camps. Interior CS Fred Matiang’i is threatening to dump the refugees back in warring Somalia, where the vast majority fled.

This not only violates Kenya’s obligations under international law, but also rubbishes an arrangement with the UN High Commissioner For Refugees for voluntary repatriation of Somali refugees. But more than that, the government’s treatment of refugees exposes a callous disregard for their humanity and welfare.

This is the third time in the last five years that the government has ordered the camps closed. The reasons offered have changed little. Just as his counterpart, the late Gen Joseph Nkaissery claimed in 2016 — and as the government has been disingenuously claiming without providing evidence for nearly a decade — Matiang’i cited national security concerns, especially the threat posed by al Shabaab terrorists.

It has long been clear that the foreign poor are considered somewhat less than human beings by the Kenyan state— relegated to the margins of society; confined in remote camps; robbed and raped by state officials and bandits (who are many times one and the same); and then scapegoated for the government’s own security failures.

Nairobi had tried in vain to bully Mogadishu into withdrawing the case, employed delaying tactic at the court and finally refused to make its oral submissions.

More than that, they are treated as bargaining chips in Kenya’s relationship with the West and especially with Somalia, a pinata to be beaten until it cracks open and pours out concessions and money.

Kenyan cops refer to Eastleigh, Nairobi’s famous Somali district, as the ATM — which they routinely visit to make “withdrawals” in the form of extorted bribes. In the same vein, the government sees Dadaab and Kakuma as a source of withdrawals, using the threat of shutting it down to shake down the international community.

The timing of Matiang’i’s announcement is not a coincidence, coming as it did immediately after oral submissions in the case Somalia has filed at the International Court of Justice over 100,000 square kilometres of sea claimed by both states on their disputed maritime border and thought to be rich in hydrocarbons and fish.

Nairobi had tried in vain to bully Mogadishu into withdrawing the case, employed delaying tactic at the court and finally refused to make its oral submissions. It all points to panic in the Kenyan government over the prospect of losing the case and having to compensate international companies to which it already sold mining licenses in the disputed triangle.

Rather than examine its own actions, as it has always done, the government has elected to take its frustrations out on the refugees. Tellingly, Matiang’i and his crew declared that Kenya and Somalia have no diplomatic relationship to enable the hosting of refugees, as if that were necessary for Kenya to fulfill her obligations under international law. His ministry would later try to deny the obvious, telling Reuters agency that “the move to close the camps was not related to diplomatic difficulties with Somalia”.

Matiangi cited terror threats as the main reason behind closure of Daadab, Kakuma.
News
4 weeks ago

The scapegoating of refugees by the government endangers not just them, but Kenyans as well. One study found that the presence of refugees in the expansive and semi-arid Turkana county boosted overall income and job creation by 3.4 per cent and 3 per cent respectively.

Additionally, the refugees increased consumption of local staples and dairy products by 35 per cent hence expanding the revenue base for smallholder farmers and herders. Further, closing the camps would negatively affect more than 40,000 Kenyans pose as refugees in order to access services in the camps that the government has failed to provide and deprive host communities the auxiliary services that UNHCR and other agencies provide.

Even worse, as history has taught, what starts with refugees eventually becomes the lot of Kenyans themselves. Once government gets a taste for dehumanisation, it will not stop at the camps. All Kenyan lives will become just as disposable. It is thus in all our interests to demand that the oppression of refugees ends.

US concerned over possible closure of Dadaab, Kakuma refugee camps

Biden’s administration sought to know the state of repatriation of the refugees.
News
4 weeks ago
by PATRICK GATHARA Political Cartoonist and Commentator
Siasa
27 March 2021 - 11:00