• This is a frontal and brutal assault on the Constitution and an egregious violation of the social contract between the state and citizens, 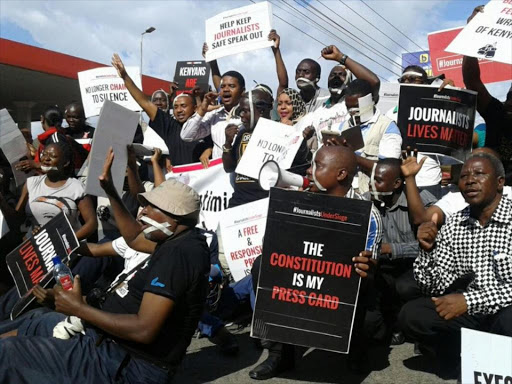 On  August 18, 2020, Milton Were and Jack Okinyi were arrested by officers from the Directorate of Criminal Investigations, Operations Branch.

Before being booked at Capitol Hill police station, Were and Okinyi were driven around Nairobi and its environs for hours. The period before and during their arrest was marked by a reported assault incident, the confiscation of electronic gadgets and warrantless entry into Were’s private home, amongst other human rights violations.

Two days later, Were and Okinyi were finally brought to Kibera law courts and charged with publication of false information under Section 23 of the Computer Misuse and Cybercrimes Act, 2018.

This provision enacts a legal duty of “truth” and attracts a fine not exceeding Sh5 million ($45,176) or imprisonment of up to 10 years, or  both. Were and Okinyi were arrested and charged because of a blog post detailing a billion-shilling road tender corruption scandal.

On March 11, 2021, prominent Kenyan comedian Eric Omondi was arrested hours after he had uploaded his reality show Wife Material on his social media accounts.

Omondi was arrested by the Kenya Film and Classification Board (the Board/KFCB) compliance officers and DCI officers and taken to Kileleshwa police station before being released.

The Board claimed Omondi violated Section 12 of the Kenya Films and Stage Plays Act (CAP 222) which prohibits exhibition, distribution or broadcast of any film without registration or certification by the Board. This provision attracts a fine of Sh100, 000 ($903) or imprisonment of up to five years, or both.

The lived experiences of Were, Okinyi and Omondi offer a glimpse into the consequences of vague and imprecisely drafted pieces of law that are clearly in conflict with the Constitution of Kenya.

Article 33 of the Constitution is clear: "Every person has the right to freedom of expression which includes, (a) freedom to seek, receive or impart information or ideas; (b) freedom of artistic creativity; and (c) academic freedom and freedom of scientific research."

Limitations of this right are only permissible in extremely exceptional circumstances, including incitement to violence, which are themselves subject to the three-part test of legality, legitimacy, necessity and proportionality under Article 24 of the Constitution.

As is clearly evident, the threshold for limiting the right to free expression is deliberately high, and neither provision passes constitutional muster, which we will expound uponthe next three parts of the ‘Gagging Free Speech’ series.

Under the guise of law enforcement, our authorities are now relying on authoritarian readings of the law and deploying tyrannical practices to stifle public commentary on social and political issues, with wanton impunity.

This is a frontal and brutal assault on the Constitution and an egregious violation of the social contract between the state and citizens, as contained in our transformative Constitution.

These affronts are reminiscent of the human rights violations of yester-year Kenya. In 1990, PCEA clergyman Reverend Lawford Ndege Imunde was arrested, prosecuted and jailed under sedition laws (now repealed) for simply penning his personal thoughts about Robert Ouko’s death in his personal diary.

Just like sedition, prior restraint provisions such as those exercised over Omondi and content-related offences (criminal defamation and “fake news”) like those visited upon Were and Okinyi, are characterised by a notoriously problematic challenge.

They both create powerful and subjective instruments for authorities to determine what is and what isn’t decency, morality, truth, including the thoughts and activities in which we indulge privately and in the confines of our bedrooms.

Barely two weeks ago, it was announced that proposed amendments to the CMCA, 2018 would be tabled before Parliament by Garissa Township MP Aden Duale. This announcement is concerning. If Were and Okinyi were subjected to ill-treatment and arbitrary detention based on this version of the CMCA, 2018, we don’t dare to imagine a version where  even stronger government artillery, capable of shepherding ‘truth’ using criminal sanctions, is created.

In the next three parts of this ‘Gagging Free Speech’ series, we will look at the history and purpose of these two laws, and their relation to freedom of expression. We will also examine the government’s proposed expansion of its content regulation powers in the pornography field, and look into Ezekiel Mutua’s violations of free speech during his tenure at the Film Board.