• The Matungu and Kabuchai by-elections were an indication that Western region is locked. Critics say DP should have helped sugar farmers.

• The DP is on the record accusing the western Kenya voters of “misusing” him, rushing for handouts but denying him political support. 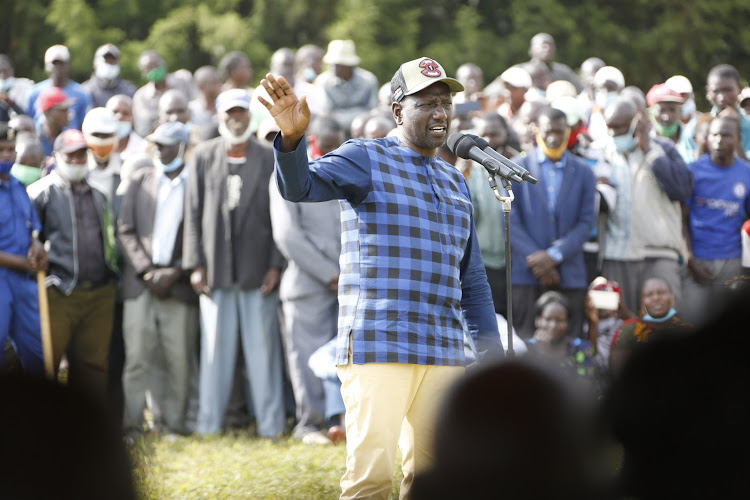 Deputy President William Ruto's fight for a sizeable share of the 1.4 million votes in Western Kenya seems to be running into one hurdle after another on the way to 2022.

Ruto went on a charm offensive in the region soon after the 2017 polls after helping Jubilee secure eight out of the 33 parliamentary seats in an ODM, Ford Kenya and ANC zone.

Apart from the seats, Ruto was key in increasing the presidential tally in the region. In Kakamega, President Uhuru Kenyatta got 63,191 votes, up from the 12,469 he got in 2013.

But the situation has been changing. The DP is even on the record accusing the Western Kenya voters of “misusing” him.

He said residents of the region only invite him to support development projects but shun him when he needs their political support.

“He has failed to use his position to revive Mumias Sugar Company, to restructure the debt of Nzoia Sugar Company and ensure cane farmers are paid in time,” Savula told the Star.

The Lugari MP said the Deputy President should have initiated solid development programmes in the region instead of giving “handouts every weekend.

“He was the chief of handouts in western Kenya. The Luhya people ate his money and went back to Musalia Mudavadi,” he added.

Savula explained that solid development programmes can only come from government through budgetary allocations and not harambees and handouts.

“The Matungu and Kabuchai by-elections were an indication the Western region is locked. It is high time he keeps off the region,” the Lugari MP said.

In the March 4 by-elections in Matungu and Kabuchai, UDA — a party associated with the Deputy President — performed dismally.

However, UDA chairman Johnson Muthama said he was satisfied with the performance of the party so far.

“UDA is just three months old and it has already changed the conversation in the country. We are about the rule of law, respect of the Constitution, democracy and development of the country,” the former Machakos senator said.

Aside from the by-elections, UDA's point men in the region seem to be distancing themselves from Ruto.

Kimilili lawmaker Didmus Barasa last weekend announced he will not be part of the Tangatanga wing of politics for the next four months.

Barasa also hinted that he would be pushing for the unity of the Luhya people and is open to working with Mudavadi come 2022.

“I will be consulting with various stakeholders and like-minded leaders in the Luhya nation. I am keen to reconcile factions within the community so we can try and move in one direction.

"We have always been divided as a community and thus never gets o benefit,” Barasa said at a press conference on Sunday.

However, Mumias East MP Ben Washiali - a close ally of the Deputy President - said remarks by Barasa and Sirisia MP John Waluke Sirisia do not mean the DP's support in Western is weakening.

Malava MP Malulu Injendi, another ally of Ruto, said the statements by Barasa and Waluke have nothing to do with their support for Ruto. Waluke said ODM's Tim Wanyonyi (Westlands) is the best candidate for Bungoma governor .

“The success of Ruto in Western Kenya politics relied on the political misfortunes and weaknesses of Ford Kenya and the Amani National Congress. Vice Versa , the strength of the two traditional political parties of Western rely on the misfortunes of UDA and ODM in that region

But analyst  Joseph Mutua disagree, saying the Deputy President's popularity in Western is not fading away.

“He has not been that popular and people were following him to get handouts. If he goes there with money, even now, so many people will declare their support for him,” Mutua added.

Mutua also said MPs from the region who support him are also doing it for financial gain.

“Some of them are rent seekers. All they are looking for is money,” he stated.

Mudavadi and Ford Kenya party leader Moses Wetang'ula have been pushing for the region to speak with one voice.

“The unity of the region is the message we are sending. What is this interest that people are looking for in this region?” Mudavadi asked after his victory in Matungu.

Wetang'ula believes it is high time for the Luhya community to be united and produce one candidate who will contest for the top seat in 2022.