The campaign couldn’t have come at a trickier time for Uhuru’s Jubilee.

• There is a school of thought that because this is Kisii, and the homeland of Interior CS Fred Matiang’i, Jubilee must field a candidate and the super CS must flex his muscles

• But ODM holds the governor and Senate seat as well as nominated Senator Janet Ongera, which gifts the Orange party the requisite political talent  to deliver the seat 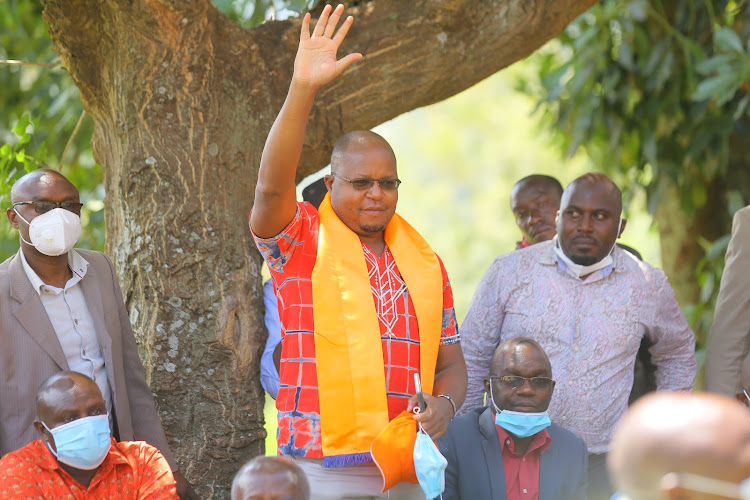 In my community’s folklore, there is this famous tale of a character called Nyamgondho, son of Ombare. He was a peasant fisherman living a miserable life by the lake, and whose nets hardly captured enough for his own subsistence.

A loner who was shunned by locals, Nyamgondho had resigned to his fate, living one day at a time. Then one day, he went into the lake to collect whatever his nets had caught for the day, when they appeared to be dragging something much bigger than a regular catch. It was a woman of the sea.

Nyamgondho immediately beseeched the spirits of his ancestors to forgive him for any indiscretions he had committed against them, and send the creature away. But the woman of the wild waters asked him not to worry, for she came in peace, and begged Nyamgondho to take her home with him. He reluctantly did. He named her Nyanam, daughter of the lake.

As fate would have it, Nyanam brought abundant good luck to Nyamgondho and his home. Every day from then, his fishing nets were full, the catch bringing wealth. Nyamgondho’s livestock became the talk of the community, his wealth legendary. Predictably, he married more wives. Nyanam did not mind co-wives. She only asked that she be respected, and that they should run a peaceful home.

However, Nyamgondho’s arrogance grew with his wealth. When drunk, he would insult everyone and everything in his homestead, especially Nyanam, who he started referring to as “even this miserable one I picked up from the lake”. The sentence sounds heavier in my vernacular, but you get the drift.

When Nyanam got tired of Nyamgondho’s unending abuse, she woke up one day and headed back to the lake. The livestock all followed her. Nyamgondho’s wealth and status all disappeared with Nyanam. He stood by the lake begging for mercy, in vain. He sang a sombre song to punctuate the pain, but the pages of this esteemed paper may not produce the sound or the sufficient translation to capture its depth.

For some reason, the Uhuru Kenyatta faction of Jubilee reminds me of Nyamgondho and ODM of Nyanam in this story. Besieged by Tangatanga’s scorched earth politics, it took the Handshake with Raila Odinga for President Kenyatta to get breathing space in power. Life tasted good once again, and his legacy was on course to being achieved. And just like Nyamgondho, who had married more wives when wealth had come, the President incorporated more party leaders to his new coalition, which ODM didn’t quite seem to mind, as long as the “homestead” prospered.

Also, just like in the Nyamgondho case, some Jubilee insiders started whispering that ODM could take a walk back to the lake, forgetting that Nyanam was the source of the peace and tranquillity they enjoyed for the period of her stay. In basic political philosophy, every favour and concession made has a “cashable” value to be claimed in future, and no deal is made for free, especially handshakes!

The Bonchari by-election campaign couldn’t have come at a trickier time for Uhuru’s Jubilee. In the last three major by-elections —Matungu, Kabuchai and Machakos — it has been a barely concealed fact that soft and not-so-soft state power has been deployed to help ANC, Ford Kenya and Wiper parties respectively.

Since cashable political debt is claimed in a predictable manner, Bonchari now falls bang in Nyanza, and therefore what is considered an ODM stronghold, the same yardstick used in the last three contests to support the three parties. Getting fast off the blocks, ODM has already picked its candidate, former energy executive Pavel Oimeke. He has an impressive CV, having long worked at the highest levels in the energy and tea sectors. It is as if the party has thrown the gauntlet early, so that any of their coalition partners who field a candidate will be the clear spoiler now.

There is a school of thought that because this is Kisii, and the homeland of Interior CS Fred Matiang’i, Jubilee must field a candidate and the super CS must flex his muscles to show the President that he has his back in Kisii. But this is cancelled out by the fact that Kisii has for long been Tangatanga’s more regular stomping ground, and Matiang’i and his state machinery have been totally unable stop the spread of the wheelbarrow gospel in there.

Besides, ODM holds both county seats in Governor Ongwae and Senator Ongeri, as well as nominated Senator Janet Ongera, which makes the Orange party with the requisite political talent on the ground to deliver the seat for the Handshake folks. Throw in their recent victory in the Kiamokama ward byelection, and the script is complete.

Be that as it may, if Jubilee goes ahead to field a candidate, and ODM rightfully declines to do what Chap Chap did in Machakos by withdrawing, the Handshake will experience its first real electoral turbulence, and a moment of truth.

It would be interesting and unnerving to watch a contest between Raila through his point man Governor Ongwae, and Uhuru through his point man Matiang’i. I, however, submit that the sooner Nyanam knows the intentions of Nyamgondho, the better for the relationship. Of course this is all based on the undeniable fact that none of the three parties recently joined together in political matrimony, in an overrated coalition christened “Sacred Alliance”, has the wherewithal or capacity to mount a credible challenge in Kisii, quite a long way from their familiar tribal enclaves.

Therefore it falls to Uhuru and Raila to decide who between their two formations will fly the Handshake flag here, as the political vultures in Tangatanga circle with intent. If I were to advise ODM, I would categorically tell them that after the pain of Msambweni, Matungu and Kabuchai, the party must foot its foot down and make Bonchari the irreducible minimum upon which the future of the partnership lies. Otherwise they risk being boxed into a regional Luo party the way Tangatanga’s favourite vessel, UDA, has been cleverly made to look very much as a Kalenjin party in recent weeks.

Back to that folktale from my homeland, there is no compelling reason for Nyanam to keep living with betrayal and abuse from Nyamgondho, to the level of staking her political self-esteem on a shaky coalition. If Bonchari is not presented on the exact silver platter Machakos was presented to Wiper, Nyanam must gather the wealth and the peace she brought, and walk away! Cashable political debts are not known to gather dust that long!