Raila succession in Nyanza – where's the kingpin in waiting?

Who will take over from "Tinga" as Luo leader when he hangs up his boots?

• RAO has led the opposition for over three decades, the longest run by any politician in the republic.

• He has orchestrated a cult following in Kenya and few can match him. 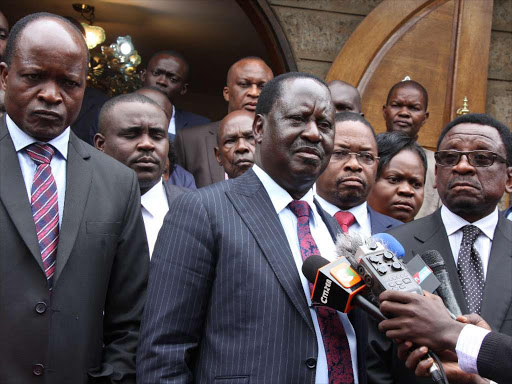 Kenya’s politics by nature is tribal and political parties are merely facades to gain power. Most do not survive beyond one election. Even when coalitions are formed, they represent tribal interests disguised as national outfits.

This ethnic balkanisation has continued to characterise our politics to date. There were two major political outfits in the lead up to the 2017 polls — which have since disintegrated – the National Super Alliance and the Jubilee Party of Kenya.

At the centre of Kenya’s politics is former Prime Minister Raila Odinga – known for his fight in the democratisation process, particularly during the dictatorial regime of President Daniel  Moi.

RAO, as he famously known, is a political father to many and rightfully so, as the majority of Kenya politicians, if not all, have been his ‘students’.

However, the tribal orientation of Kenya’s politics necessitates that each tribe/region have a kingpin who will lead and negotiate ‘on behalf of his kinsmen’ at the national table.

This has been the norm since pre- and post-Independence Kenya. One cannot speak about post-Independence leaders who enjoyed the backing  of their tribesmen without mentioning Moi, Jomo Kenyatta or Jaramogi Oginga Odinga.

While several leaders have emerged in other regions, all seeking endorsements of their tribes before asking for the national vote, Luo Nyanza has stuck with ‘Baba’.

In Western Kenya, for example, there is a division between Moses Wetang’ula and Musalia Mudavadi on who is the Luhya spokesperson; in the Rift Valley, there is a split between Deputy President William Ruto and Baringo Senator Gideon Moi of Kanu.

In Ukambani,  the fight rages on between former Vice President Kalonzo Musyoka and Machakos Governor Alfred Mutua – and the list goes on.

Raila at 76 retains his firm grip on his political backyard.

However, the question I seek to answer is whether or not Nyanza will find a suitable replacement for Raila if and when he quits politics.

The Luo nation has been blessed with charismatic leaders in the past such as Tom Mboya, Robert Ouko, Argwings Kodhek, Jaramogi, Achieng’ Oneko, Phoebe Asiyo, Hezekiah Oyugi and others.

However, none of these leaders enjoy the following, respect and audacity of Raila.

Raila has been in the forefront for the fight of Kenya’s democracy. In the era of human rights abuses and the authoritarian Moi regime, Raila was placed under house arrest for collaborating with the plotters of a failed coup attempt against President Moi in 1982.

He was later charged with treason and detained without trial for six years. His encounters with the authoritarian government generated an aura of intrigue about him and it was probably due to this that his political followers, christened him "Agwambo", Luo for "Mystery" or "Unpredictable".

Perhaps, more controversial than ever about Raila was the public swearing-in  as the People’s President – an act which is treasonable. Few would pull this. His Nasa co-principals could not even dare to attend.

Apart from personal attributes like charisma, to be able to match and replace Raila, one needs to have a wide and sophisticated intelligence network and information gathering machine across the country. Those positioning to replace RAO do not have this.

RAO has led opposition politics for more than three decades, the longest run by any politician in the republic. He has orchestrated a cult following in Kenya. In fact, in Nyanza, no one gets elected without pledging loyalty to him and running on his party, ODM, ticket.

A few politicians who have gone against him such as Dalmas Otieno, Raphael Tuju, Shem Ochuodho lost miserably and were sent into permanent political oblivion. No one goes against 'Baba’ and remains standing.

However, with all this influence and charisma, Raila has failed to win the presidential elections four times – the 1997, 2007, 2013 and 2017. All these elections have been marred by widespread voter rigging and post-election violence. This led to the March 9, 2018,  handshake between him and President Uhuru Kenyatta.

As Raila winds up his term as a political father, many Luo leaders will stick around him and seek to be endorsed as the next kingpin. But just who among them will have the zeal, will and power to fit in his shoes?

When we think about Raila’s replacement we think about his lieutenants such as Wanga, Amollo, ODM chairman John Mbadi, Kidero,Orengo,  Nyong'o and Junet. And perhaps, rebels like Miguna, Migori Governor Okoth Obado or Tuju.

However, the likes of Orengo and Nyong’o are automatically out since they are in the same age bracket as Raila and will most probably retire with him.

The only person that I genuinely think would have had a chance is  the late Senator Otieno Kajwang'. He was charismatic, smart, intelligent and had the ability to move the crowd – and most importantly, he was loyal to Raila a trait which most of his current lieutenants lack.

Kidero would have been another fit. He has deep pockets, a requirement for big political contests. Having served as Nairobi governor also places him above other potential replacements. However, there are questions about his loyalty.

Perhaps, the Luo salvation might come from the leftist wing of Miguna, Obado or even Tuju. Miguna  is smart, charismatic, intelligent, and brave. But would he find favour with the Luon nation having bitterly criticised Raila numerous times?

Obado is the only other man I would think of as having the ability, will and power to replace Raila in the region. To put it in terms of contest, he has gone against teh ODM boss twice and come out unscathed.

Nonetheless, he does not have the oratory skills, influence and charisma of Agwambo. Similarly, he is also facing a number of criminal cases, including graft and murder, which he denies.

This leaves me with three potential candidates — Junet, Wanga and  Amollo.

Junet is one of Raila's most loyal foot soldiers and undoubtedly his right-hand man. He has good oratory and mobilisation skills. However, he is only Luo by association. He will have to fight the outsider tag.

Wanga is aggressive, charismatic and also has very good oratory and mobilisation skills. However, in a male-dominated society, she will have to work twice as hard as her male colleagues to be considered a suitable replacement.

Having examined all these leaders, my vote goes to Amollo. The man is polished, intelligent and has an impeccable  grasp of law. He is arguably the most eloquent MP in the 12th Parliament. The Senior Counsel is also former chairman of the Commission on Administrative Justice (Ombudsman's office).

His erudition and skill was publicly exemplified in the presidential petition at the Supreme Court in 2017. His client, Raila, won the case against President Kenyatta and the IEBC. Otiende is the man to watch.

The writer is a political economist