• Apart from Rutto, the other aspirants are incumbent Governor Hillary Barchok and Mining and Petroleum CAS John Mosonik.

• With the clock ticking towards 2022, the hopefuls are racing against time to impress upon the electorate that they are head and shoulders above the rest. 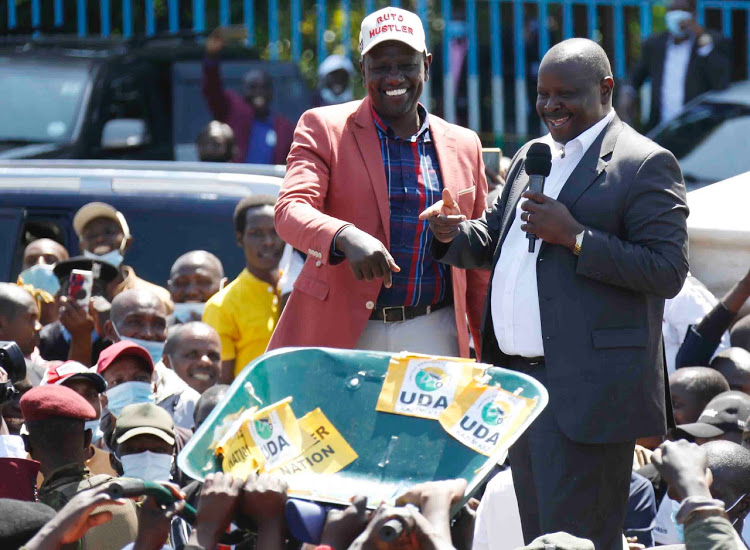 The contest for the Bomet governor's seat is a three-horse race pitting allies of Deputy President Ruto against each other.

This follows the entry of Chama Cha Mashinani party leader Isaac Rutto into the DP's camp, making the contest one of the most widely watched in the South Rift.

Apart from Rutto, the other aspirants are incumbent Governor Hillary Barchok and probably Mining and Petroleum CAS John Mosonik.

The hopefuls are racing against time to impress voters that each is head and shoulders above the others.

For Barchok, it was an easy ride until the emergence of Rutto and Mosonik, both experienced hands in managing public affairs.

It is not clear  if Rutto is going to fold his CCM party and join the newly formed United Democratic Alliance linked to DP Ruto.

UDA is the party for most disgruntled leaders in the Tangatanga faction of the Jubilee Party.

Ruto's influence is likely to tilt the outcome of the race, however, he has been categorical the choice lies with the voters.

In the run up to the 2017 election, Ruto played a key role in ensuring Rutto was toppled in his reelection bid after he opposed him. Jubilee' candidate Joyce Laboso, now deceased, won the seat.

Mosonik has not publicly declared his interest for the position by virtue of his position as a civil servant, however, his  moves across the county are telling.

He has been traversing the county, supporting development projects, churches and financially helping vulnerable people, a common tactic by aspirants who say they want to "give back" to the community.

Former East Africa Community minister John Koech says the decision on who should be the next governor lies on the people, who should refuse to be swayed by gestures but critically assess all the aspirants.

Koech, who unsuccessfully ran for governor in 2013, said voters should elect a candidate who listens to their concerns and strives to deliver.

He said while it is hard to rate Barchok since he is barely over a year in office, his actions should be weighed by voters.

“Rutto has been in that position before and residents will simply make a comparison on what was realised during his tenure and during the current administration," Koech said.

She said while it is still early to predict who will carry the day, Rutto might not stand a chance despite his new-found relationship with DP Ruto.

Kones accuses Rutto of diverting the peoples' attentions from the real issues facing them and instead plunging the county in an early political mood.

“We want the people to differentiate between leaders who are development-oriented and politicians. Rutto thrives on heavy contests and his early campaign seeks to turn the county into a political battlefield,” she said.

And whereas Rutto has made it clear he will not interfere with the work of the current leadership since “this is their opportunity,”he has been going round the county selling his agenda.

He has at the same time been asking the county leadership to deliver on its promises and urging the residents to hold it to account.

In a recent event, the CCM leader took issue with how health services are being delivered, accusing the county administration of failing to ensure people get the required attention.

He cited the ambulance deal with the Kenya Red Cross that he started during his tenure as one that was helpful. He accused the county of doing away with the service, leading to a crisis whenever one needs urgent medical attention.

“We entered into a deal with the Red Cross where they gave us ambulances but we are surprised it is no longer there… Those ambulances were available anytime in every subcounty when needed,” Rutto said.

He asked, "What are we saving and trying to experiment with here yet these are the people who pay the taxes?”

Barchok told Rutto and his competitors to give him the opportunity to deliver as he is capable of doing so.

The county chief has used barazas to censure those against his leadership, saying “This is my time, this is not the time for politics…2022 will come and the people will decide. They will  look at our scorecard, so allow us to work.”

“There are some people moving round saying they can deliver. Ask them what they did when they were in power,” Barchok said at a function in Sotik.

Mosonik has not said when he will resign, as required, to start his campaign.

Political pundits say anyone among the trio stands better chances of clinching the seatif they present unique, practical ideas.

“People no longer want to hear the usual stories where you tell them I will do this and that...they want it practical,” Makiche Malabu from Bomet East said.

He says with the trio having been in government, residents will put them to task to explain why some projects have not been fulfilled yet they have been in influential positions.

Malabu further noted that with the DP having shifted focus on his presidential bid, he will have no time to either endorse or campaign for any candidate.

“Unlike the last election where Rutto rebelled against the DP and vowed to teach him a lesson, this time round, Ruto has all the three supporting him and so it will be hard for him to endorse anyone,” he said.

Kipkemoi Barsumei, another political expert and former Bomet mayor, said residents are now awake and they will not elect anyone blindly as they know what they want.