BBI, the Bill, and referendum — where are we now?

Raila wants his victory to come from the people not Parliament. So who decides?

• The media tend to speak as though the next step is a referendum. But first the Bill goes to Parliament.

• Whichever way our constitution is amended Parliament must be involved: either a proposed amendment goes straight to Parliament and then maybe to a referendum, or it goes to Parliament if it gets one million signatures, and at least 24 counties. 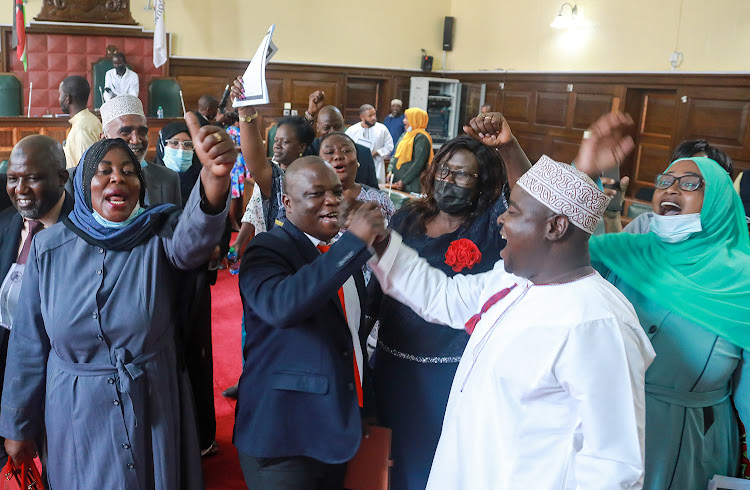 I get a distinct feeling that the country is sleepwalking into constitutional change, led, cajoled and misled by people who often do not fully understand what they are doing, except to the extent it benefits them. There have been good comments in the media. But also mediocre ones. And some positively misleading and politically driven.

So where are we now? Everything said here of course may be upturned by a court decision. Almost all aspects of the procedure being used have been challenged in one case or another in the Supreme Court or the High Court. I shan’t say constantly “Subject to the courts” but this should be understood.

WE WE ARE COMING FROM

You will recall that there are two routes to change the Constitution. One is to go straight to Parliament. The other is the “Popular Initiative” (the People’s Initiative” which involves at least a million signatures, then the county assemblies and Parliament) which is being used now.

More than 24 county assemblies have voted to support the BBI Constitution Amendment Bill. Many counties made some show of consulting the public. How effective was it? I am tempted to say that if you did not take the opportunity to tell your MCA if you were opposed, you have lost your best chance to stop this juggernaut.

And it is fairly clear that ODM leader Raila Odinga looks forward to a referendum – and to winning it, as he did in 2005 with the very first constitutional referendum. In fact at one point Odinga was talking of going to the people rather than Parliament. But that was impossible. Interestingly he is now focussed on educating Kenyans about the BBI – obviously with a view to their supporting it in the referendum.

In fact it was – if the objective was really and solely to change the Constitution – totally unnecessary to go through all this business of collecting signatures and going to the counties. Messrs Raila and Kenyatta could have taken the BBI proposals straight to Parliament.

But there was a risk – theoretically – to the route actually taken. Namely that fewer than 24 counties would accept the proposals. But that risk was largely eliminated: a lot of the BBI proposals appeal to county assembly members – such as raising the minimum allocation to counties to 35% of revenue raised nationally from 15%, and insisting on a ward development fund. But any serious risk of counties not going along was removed by the nice little deal that President and Mr Odinga set up: the MCAs’ car allowance. So much for the people’s will prevailing at the county level.

I have wondered whether Raila would not really prefer Parliament to reject the BBI Bill so that the people get to vote on the whole package and – he would hope –vote for it. However, it is not terribly likely that Parliament will reject the deal. More seats for some vote-rich areas. Less money for poorer counties (no-one focusses on that but it is true), which means more money for some counties. When Parliament does adopt it there will be only a limited referendum.

At least one author has suggested that actually no referendum will be needed – every change proposed could go through Parliament and become law without a referendum. However, almost certainly a referendum would be required on some issues. Many people would say that the Judiciary ombudsman as a member of the Judicial Service Commission threatens the independence of the courts. Some would say that changing the structure of the IEBC would affect the independence of that body. Giving Parliament the job of approving a Prime Minister is affecting the functions of Parliament. All these issues are listed in Article 255.

But it is not clear that increasing the money for the counties affects the “objects, principles and structures of devolved government” so needs a referendum. Nor that making the best loser in the presidential election the Leader of the Opposition, or abolishing woman county representatives in the National Assembly needs a referendum. Whether issues like these need a referendum will be vigorously argued – including in court

But Raila seems to want a referendum. He wants his victory to come from the people not Parliament. So who decides? First the President asks the IEBC to hold a referendum and presumably specifies on what. But only if the “amendment” passed by Parliament relates to matters listed in Article 255. This is where the courts will come in – and if he tries to have a referendum on matters not listed people will almost certainly go to court to stop it. And if the referendum does include matters not in Article 255, a negative vote by the people could not prevent the decision of Parliament having effect.

If we get to the stage of a referendum you need to understand what exactly you will be voting on. It seems likely that you will only be asked to vote “Yes” or “No” to the whole package. You won’t get the chance, for example, to say “Yes” to 35 per cent for counties but “No” to a Prime Minister.

This means that if you have a view you must not wait until a referendum -   because it may turn out not to include the matter(s) on which you have views. One thing the courts will be deciding (soon we hope) is whether Parliament must have a 90 day period for public consultation - which the Constitution insists on for the ordinary constitutional amendment process through Parliament. If so, there is your chance – participate as an individual or member of an organisation in that public participation.

And when it comes to an actual referendum, do be sure that you understand what your “Yes” or “No” means. It would make no sense to vote “Yes” because you like one small thing in the Bill even if this means you are approving some big things that you really dislike about it. It would be equally unwise to vote “No” because you do not like some idea in the BBI report, or in the Bill passed by Parliament, if in fact you are not being asked your opinion on it. Know what your vote means.

But how to educate yourself? Certainly don’t believe everything you read in the newspapers. A great deal of inaccuracy appears there and in other places. Sometimes there is honest error, often just replicating the errors of others, sometimes deliberate misinformation. At least get hold of the Bill, read it and discuss it with others. Don’t necessarily rely even on the BBI report, which discusses all sorts of stuff that is not in the Bill.

The author writes in her personal capacity