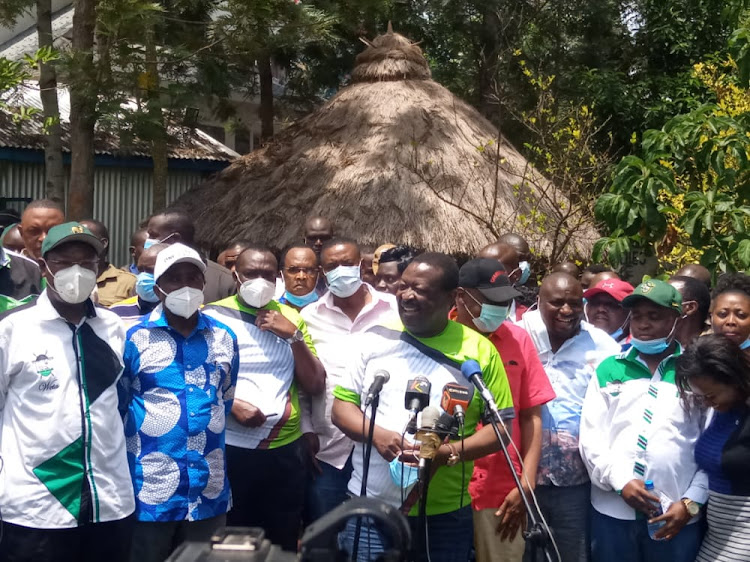 The “sacred” alliance bringing together Musalia Mudavadi, Kalonzo Musyoka, Gideon Moi and Moses Wetang'ula is faced with limited options, even as they cobble up a third force ahead of 2022 poll.

The quartet has detached itself from former Nasa headman Raila Odinga and is now forging a new coalition fashioned as the third force to face off with Deputy President William Ruto in the 2022 presidential race.

The politicians, who all have all announced presidential interests, are seen to be banking on President Uhuru Kenyatta to endorse their line up, which may see the four share the positions envisaged if the changes proposed in BBI are passed.

The BBI offers several leadership positions in the Executive including a prime minister and two deputies.

With Mudavadi and Kalonzo standing their grounds that their names will be on the ballot, analysts warn that without Raila in their line up, they could end up being the “donkey candidate in a race of two horses”.

Political commentator Joseph Mutua said the four have very limited options in their quest to form the next government.

“They are considered to be lightweights because they still do not have a lot of support across the country. Some are not in full control of their backyards,” he explained.

Mutua stated that their only hope is for Raila to step down and declare his support for them, an endorsement, he said was next to impossible.

“They need Raila's and President Uhuru Kenyatta's support for them to think about forming the next government,” he added.

Mudavadi and Wetang'ula come from the populous former Western province. However, they are facing an uphill task marshalling the vote rich region to vote as a block.

The duo enjoy support in Vihiga part of Kakamega, Bungoma and Trans Nzoia.

Raila has enjoyed support for decades in Busia and Kakamega and the two Luhya leaders will have to pull up their soaks to edge out the ODM influence.

The Deputy President has also launched a spirited onslaught to try to make inroads in the region.

Ruto led Jubilee campaigns in the run-up to 2017 General Election that saw the ruling party win some seats in Kakamega, Bunguma and Trans Nzoia counties.

Lugari MP Ayub Savula dismissed as pessimists those who have spelled doom in the alliance that has opened a vicious fight with the former Prime Minister.

Savula, the ANC deputy party leader, said the four leaders will agree on the best winning line-up saying “they do not need endorsement from anybody”.

“This is a safe pair of hands that will deliver Kenya’s dream. It is a team of leaders who are keen to change the lives of Kenyans. They will sit down and agree on who is best suited to fly the flag,” Savula told the Star.

The four have not made public details of their union but are said to be working on modalities of picking the flagbearer.

They first announced that they were working together during a public rally in Machakos on January 27 while drumming up support for Wiper senatorial candidate in Machakos Agnes Kavindu.

But since Kalonzo is also nursing presidential ambitions, the matter becomes complicated for the alliance to take off.

Both Kalonzo have served as vice presidents and also unsuccessfully run for president.

Mudavadi ruled out the possibility of joining Raila or Ruto camp and told the duo to brace for a battle of their lifetime.

“I am ready to walk the whole journey. Everyone should sell their agenda and let Kenyans decide at the ballot,” he said.

He expressed confidence that the alliance is going to form the next government. “Those doubting Thomases and Judas Iscariots will be in for a rude shock.” said Mudavadi.

Moi, on the other hand, has been calling on Kenyans to support the team saying it will deliver change after the exit of President Kenyatta.

Political analyst Daniel Orogo said the political headache that awaits the four is the choice of a flagbearer.

“No one will want to play a second fiddle. It will be a tough balancing act that if not handled well, will lead to the death of the alliance,” said Orogo.

Advice Mundalo, also a political analyst, concurred with Orogo and said the alliance might disintegrate when the time of picking its candidate comes.

“They are determined to be in an alliance to be stronger than Raila or Ruto because none of them can beat them on their own,” Mundalo said.

He nonetheless pointed out that he does not see the alliance backing Raila or Ruto or vice versa.