Politics of endorsement and the believable lies that spice it up

• Having lost the last two elections as a coalition, the biggest issue for the former NASA principals would have more to do with electoral reforms,not just endorsement

• It is an area where Raila and his party have taken the lead and the mere thought that they would do all this, then hand it all to someone else amounts to political naivety. 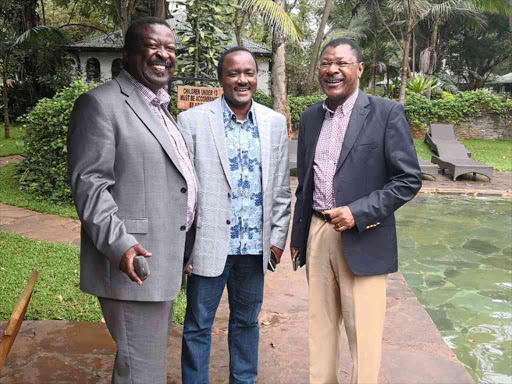 Where I come from, there is a saying that translates to “a tick can lodge itself on the body of a lion and live there sucking its blood, but it can never rule the jungle with him."

I am not competent enough to decipher the moral my ancestors intended to attach to this saying, but in Kenyan politics, you will find many small parties, and their leaders, attempting to make large rivers subservient to small streams.

The reverse is trying to locate the offices of these three parties in Siaya county, Raila’s home base, or even the larger Nyanza region. You are likely to search until the second coming of our Lord, without progress.

This provides a very basic prism through which to look at the ambitions and sizes of political parties, and therefore what they should logically demand at the negotiating table.

A common narrative comes out when you speak to ODM people in these counties. Being the more organised formation, they sacrifice so much when forced to operate under the radar because the 'local party' has carved out that zone as its sphere of influence in 'coalition agreements arranged in Nairobi boardrooms'.

In a way, in fact, these coalitions help weaker parties stand on the feet of others, while hampering the growth of the biggest party. However, as I have argued before, it is the nature of coalitions in this country for the person running for President to accept all conditions presented by coalition partners, and swear on the hallowed graves of his ancestors that he will fulfil all.

I suspect there is usually time to go back under cover of darkness to seek forgiveness from the spirits of the ancestors for this desecration. I am amazed that in this age and era, politicians still sign these secret MoUs, and then seriously expect them to be fulfilled. To make it even more comical, the public is never let in on the details at the signing part, but are promptly washed with the tears of lamenting politicians when betrayal happens.

There is also a strangely selective way in which the supposed repayment of these political debts is being sought. Take the case of Mudavadi. He risked his political future in 2002 when he remained in Kanu rather than joining the Rainbow rebels. He subsequently stood by Uhuru Kenyatta in that election. He has, however, chosen not to chase down this debt.

On a TV talk show last week, Cotu secretary general Francis Atwoli said something that the political class has chosen to ignore all these years: That Raila Odinga was on the verge of endorsing Mudavadi as the Rainbow candidate in 2002, and the Kibaki Tosha declaration was a product of Musalia’s ill-fated return to Kanu. I believe Atwoli because as a latter day kingmaker, he has political history at his fingertips. I just wonder if 2002 would, therefore, feature in Mudavadi’s ledger of political debt, probably as bad debts written off.

The Kalonzo one is even more intriguing. In 2007, he didn’t think Raila was electable, and when the ODM leader couldn’t see this wisdom, Kalonzo fled with the ODM-K instruments, leaving Raila and his followers briefly partyless. Providence intervened in the form of lawyer Mugambi Imanyara, who had registered another variant of ODM, who gave Raila and his band a home in time for the 2007 election.

After the 2007 election, the signing of the national accord and the formation of the coalition government, Kalonzo and Raila, as Vice President and Prime Minister, respectively, engaged in embarrassing political wars over who was senior in rank.

Conventional wisdom had it that they couldn’t wait for the coalition government to end so they could go their separate ways. In the meantime, as Vice President and having helped Kibaki stabilise his government following the chaos of early 2008, Kalonzo rightfully assumed he would be tapped as the regime candidate for the 2013 election.

The stars appeared to be aligning in his favour as Uhuru and Ruto fought cases at the ICC. To his utter shock, they didn’t give him a second look. Going alone was out of the question, because revenge was also on his mind. He joined Raila in the Cord alliance, which was more a consortium of victims of PNU betrayals.

To be honest, Kalonzo needed a soft landing more than Raila did. So on this political debt, the ledger is tilted heavily in favour of Raila. As for 2017, they stuck together because they hadn’t won 2013, and it was better not to be hanged separately.

There is nothing to show Kalonzo supported Raila over any particular belief in the latter’s credentials. With utmost respect to Senator Wetang’ula, I am sure nobody promised him the presidency in all this back and forth, so it is hard to understand which debt he has been claiming at the rallies.

Having lost the last two elections as a coalition in acrimonious circumstances, I imagined that the biggest issue for the former Nasa principals would be more to do with electoral reforms and greater inclusivity, not just endorsement.

It is an area where Raila and his party have taken the lead and the mere thought that they would do all this then hand it all to someone else amounts to political naivety. Why wouldn’t the other Nasa principals not play a frontline role in seeking electoral reforms so that any endorsement is not in vain?

Besides that, there are two key considerations at play. One, assuming Raila wasn’t averse to endorsing someone else, would his support bases play along, knowing all that is at stake, and knowing that he remains the carrier of their aspirations? Is Raila’s support transferable?

Two, in the bigger political picture, which includes Uhuru’s own desires about his succession, would the system settle for a weaker candidate just because of a deal that was signed in some hotel years ago demanding that the more able candidate sits out the next election?

To put it more bluntly, if Uhuru is placing roadblocks in the path of his deputy, it is only sensible that he will want his partners from the Nasa formation to tone down the noise and rally around a candidate who can beat DP William Ruto.

It is too early, but the crystal ball says Ruto would have the debt claimants for lunch, if they faced him, even together.

Looking ahead, the custodians of the political ledger will have to credit reality and debit illusion before they can go back to the people to seek their mandate.