If we haven't learnt the lessons of 2008, the big, bad world is waiting with lessons of its own

•  His acolytes have been attempting to convince us that a grant and a loan are the same thing. 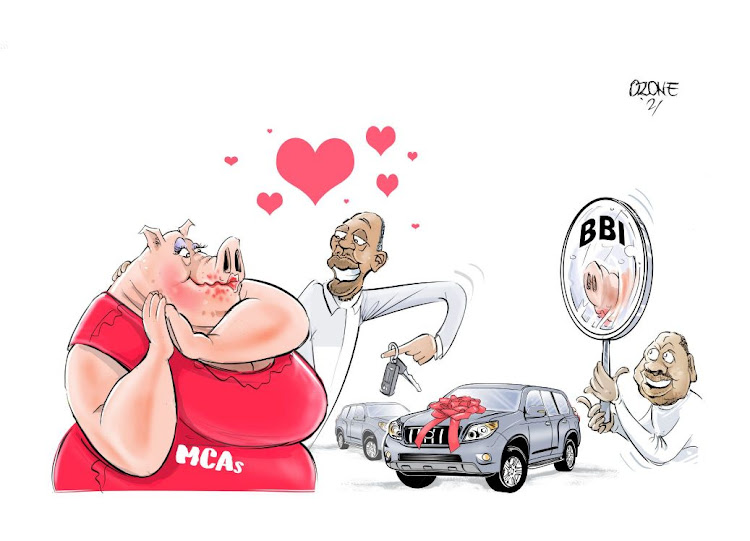 While it is perhaps meant as an injunction to parents to discipline their kids lest they run afoul of the wider world, it can also serves as well as a warning to those who do not learn early lessons – in their infancy so to speak – that they are storing up greater troubles for themselves in the future.

It is a proverb Kenyans would do well to pay heed to especially at this time when the past increasingly seems to be a blueprint, rather than a cautionary tale for the future.

A majority of county assemblies have just passed the BBI referendum draft after President Uhuru Kenyatta unashamedly brined MCAs with a Sh2 million car grant each, with his acolytes attempting to convince us that a grant and a loan are the same thing.

That by itself should have disqualified the entire exercise. However, it seems many Kenyans are happy to go along with it. We have not learnt the lesson offered by John Paul Mwirigi, who was elected as the country’s youngest ever MP in 2017 following a campaign he conducted largely on foot.

President Kenyatta did not lose any time ingratiating himself with the newcomer, immediately gifting him a luxury 4X4 befitting his status. Now that young man, once so accessible to his constituents, has become a Big Man, beating up activists who dare demand he does his job. Any Kenyan who imagines the compromised MCAs will suddenly care about their people’s welfare are in for a lesson from the world.

Similarly, 12 years ago, in the aftermath of the 2007-08 post-election violence, we carried a fairly comprehensive examination of what was ailing our nation. The Kenya National Dialogue and Reconciliation talks not only dealt with the post-election crisis but also the long-term issues that were at the heart of the violence.

These  included constitutional, legal and institutional reforms; land reform; tackling poverty and inequality as well as combating regional development imbalances; tackling unemployment, particularly among the youth; consolidating national cohesion and unity; and addressing transparency, accountability and impunity. A number of commissions were created to investigate and make recommendations on how we dealt with historical injustices, fixed our elections and built a more equitable society.

In the months following the February 28 handshake between Mwai Kibaki and Raila Odinga, politicians were quick to pass the laws that created the bloated Grand Coalition government, awarding themselves and their cronies lucrative positions.

The rest of the KNDR however, was pretty much abandoned. The reports and recommendations of the Kriegler Commission on fixing the election system that lit the match as well as the report of the Truth, Justice and Reconciliation Commission, which looked at the historical issues including land, corruption and human rights violations, are gathering dust in Parliament and State House.

Meanwhile, we have been presented by the very same politicians with a substitute process - one claiming to have done similar work though based, not on the broad-based discussions of the KNDR, but on the narrow 9-point agenda of two politicians. Once again it promises rich rewards to politicians in the form of an expanded executive (and legislature) and attached to that is a much more modest retinue of promises to deal with the problems that afflict the rest of us.

We have been here before. As we now prepare for a probable referendum (assuming the courts don’t intervene) we should keep that in mind. And if we have not learnt the lessons of 2008, we can rest assured that the big, bad world is waiting with lessons of its own.

The grant was given following president Uhuru Kenyatta's directive.
News
1 month ago

OCOB writes to SRC to be advised how to convert a car loan facility into a car grant.
News
1 month ago

Current car loan facility to be converted to car grant at no extra cost from Sh4.5 billion allocated.
News
2 months ago

KRA says payments or benefits extended to MCAs and speakers are treated as income from employment or services rendered
News
1 month ago
by PATRICK GATHARA Political Cartoonist and Commentator
Siasa
02 March 2021 - 16:45