They are largely people who have played it safe when the country needed them most, and kept off decisive moments.

• The compromise candidate is usually the one considered to have the least ability to scare members of other tribes.

• The more fences they sit on during crucial national issues, the more 'compromise' they become. 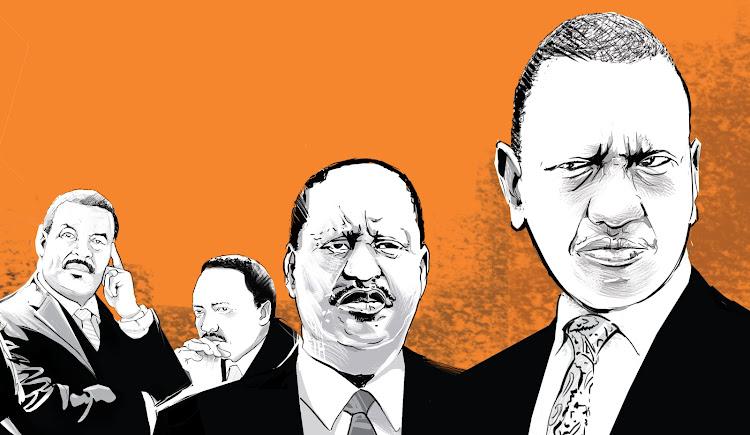 It was Deputy Prime Minister Uhuru Kenyatta who said someone in their formation was “behaving like a hyena following a man hoping that he would drop the meat”.

This was in the heat of 2012 scheming over who would become the 2013 flagbearer on the incumbent side.

Soon afterwards, Uhuru and Ruto visited Musalia Mudavadi at his home, offering the compromise ticket, before realising that such a candidate wasn’t really the real deal.

In a practical sense, Mwai Kibaki in 2002 was the first compromise candidate in multiparty Kenya.

The Rainbow rebels having stormed out of Kanu found the National Alliance of Kenya trio of Charity Ngilu, Mwai Kibaki and Wamalwa Kijana already grappling with how to pick a joint opposition candidate.

Raila Odinga's later declaration of support for Kibaki as their joint candidate may have caught his colleagues by surprise.

His decision, however, must have been informed by the tribal arithmetic Kibaki offered as well as his good standing as a compromise among the presidential hopefuls.

This brings me to the most common perception of who a compromise candidate usually is.

In a country where nearly every senior politician stokes fears in other tribes, the compromise candidate is usually the one considered to have the least ability to scare members of other tribes.

'Members' here basically mean the elite of those tribes because ordinary citizens have never really shown any aversion to dwelling together when politicians haven’t poisoned the atmosphere.

But why does one politician, therefore, qualify as 'good as a compromise for other tribes' while others don’t?

Well, it’s simple. The more fences they sit on during crucial national issues, the more 'compromise' they become.

This is actually a mechanism by which the weakest and the often laziest and most lethargic aspirant is picked to represent everyone at the negotiating table.

This is because they didn’t take any positions in the past that those fearful tribal formations could have interpreted to mean they were targeted.

As far as the compromise candidate is concerned, nobody remembers his position on constitutional reforms, where he stood during the Second Liberation, his views on police brutality, how much he thinks the SGR should have cost, or even whether Nairobi as the capital city should be governed from outer space or from a military barracks.

This is the first problem with compromise candidates. They are largely people who have played it safe when the country needed them most and kept off being part of decisive moments.

The second problem is that around the negotiating table, the polite mien of the compromise candidate and the fact he has avoided controversy misleads his negotiating partners into believing he is honest and true to the ideals they peddle around the room.

Because the LDP wing of Narc believed Kibaki would deliver a new constitution within 100 days, they were made to settle for the still non-existent post of Prime Minister

But they could have gone for the VP slot. I’m sure Kijana Wamalwa would have been more than willing to cede it for the sake of opposition unity.

Indeed, less than two months into the Narc administration, one faction was already singing betrayal, with the MoU discarded, an agreed Cabinet list was thrown out and the consultative leadership promised in the campaigns scattered to the four winds.

If the rest of the country thought the suave economist with a tribeless face holding office on the basis of a huge multi-tribal mandate promised a new dawn, then they were mistaken.

The Kibaki regime immediately went weeding out members of the former regime from the civil service and the security services.

It is the nature of compromise candidates to accede to every demand from their benefactors.

“Will you do only one term and usher in the next one of us?” they ask him.

“Oh yes, you know me! I don’t even like the presidency and politics in general. I want to go home to play with my grandchildren and write books. One term is more than enough for me. I wish there was half a term!”

The sweet tongue of the compromise candidate! Nelson Mandela did one term. You can scan the earth with a microscope, and you won’t find another Mandela!

Take Raila Odinga, for example. In recent times, he has revamped his party and turned it into a well-oiled political machine.

There are active and functional ODM offices in every corner of the country, from Moyale to West Pokot, Mandera to Lodwar, down there in Kwale to up there in Wajir.

His party has created brilliant organs and mainstreamed affirmative action demographics. They now run a Disability League, Wome's League, Youth League and electoral and disciplinary organs that make their party the most organised in the land.

Now, what political philosophy behoves Raila to do all this and then come to a table and hand it all to some compromise candidate whose own party is probably the size of a supermarket shopping basket?

Even Raila’s handshake partner, President Kenyatta, must surely know that in recent times, it is ODM’s disciplined approach to politics that has kept him afloat in the National Assembly and the Senate. Tangatanga may probably have had him for dinner!

As things stand, the President holds onto a shell of a party, while Raila runs a movement. So in a way, even he, the President, cannot suggest any compromise in which Raila is not on the ticket. And if Raila were to accede to it as a statesman, his own base would question him.

Today, as we count down the weeks and months to the 2022 General Election, the people who see themselves as compromise candidates are emerging out of the woodwork, asking that 'this thing' be left to them.

They won’t say what makes them better, but you can see the real reasons above. It is a weak narrative, as weak as the candidates themselves.

But I have to tell you that given the problems our country faces today, we don’t have the luxury of settling for weak people just because they don’t scare our tribes.

We have strong people on the ballot whose credentials are known and who can deliver us to Canaan without looking for fences to sit on as we head there!

ANC wants Uhuru and Raila to back Mudavadi in 2022

Party has settled on Mudaviadi as their flag bearer.
News
1 year ago

Mudavadi can also fix economy and end Tangatanga and Kieleweke.
Counties
1 year ago

Governor says the people have been pushing for him to run for president since Moi rule.
Counties
9 months ago
by COLLINS AJUOK
Siasa
21 February 2021 - 10:34