Disability representation: A tale of perceptions and stereotypes

people will have low expectations of you, subject you to a higher standard threshold, understate your contributions and achievements,

• The society is socialised to ‘give alms’ to the poor to be compassionate to the needy and to ‘help’ them for a greater reward.

• This led to the creation of what we call the ‘charity model’ whereby persons with disabilities are seen as objects of pity that are there to be assisted. 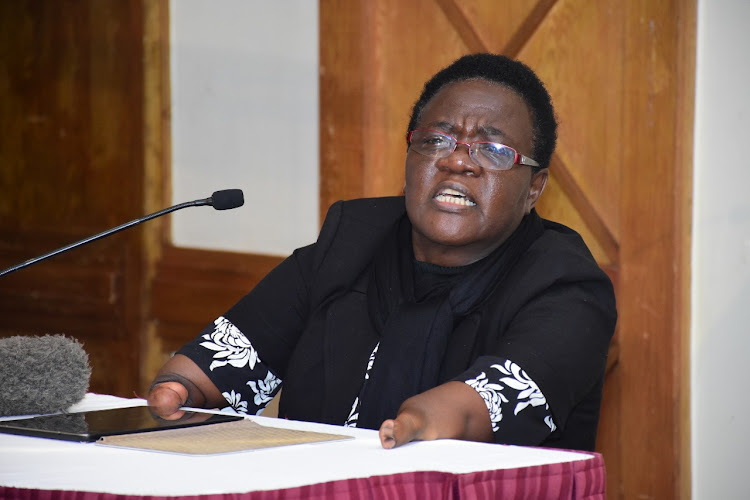 ICPD25: Heritage PS Josephta Mukobe during the launch of the initiative to end violence and improve global access to sexual and reproduction health services for persons with disabilities at Intercontinental Hotel, Nairobi, on November 13, 2019.
Image: WILFRED NYANGARESI

Last week we looked at how it has been difficult for persons with disabilities to be represented in politics since people don’t seem to fully understand the meaning of disability.

They interpret it from a purely ‘individual relational model’ that compares two individuals with one of different types of impairment. But what exactly is disability? There is a general assumption that despite the definition, ‘you know it when you see it’. That’s not quite true. In fact, this only conforms to pre-existing stereotypes that are bred in our cultural norms.

People therefore ask the question, who qualifies to be a person with disability and why?

To begin with, there is a great difference between Impairment and disability. Impairment is any form of bodily loss of function that is as a result of injury, illness or congenital condition. There are as many types of impairment as there are individuals.

Disability on the other hand results from the interaction between persons with various forms of impairment and environmental and attitudinal barriers. For example the built environment say a building or a vehicle that isn’t accessible to a wheelchair user is made primarily without due consideration for such users. The natural environment is unfriendly to say persons with albinism due to the fact that the sun is harmful to their skin and if exposed for longer periods, it leads to skin cancer, thus causing death.

The natural environment requires one to hear sounds and therefore respond accordingly. This disproportionately disadvantages the Deaf and therefore needs modification in order for them to participate on an equal basis with others. Secondly, attitude is in fact the greatest barrier in that, negative perceptions lead to ill treatment and low expectations of anyone with an impairment and therefore denial of opportunities.

For example, if a couple gives birth to a child with cleft palate or who is blind, many of them get scared due to the notions of how useful the child may be in future. Eventually, some of them even end up separating due to the stigma and taboo associated with this occurrence. As a result, such a child may be denied a chance to go to school or even at home, they may be treated differently from other siblings.

The society is socialised to ‘give alms’ to the poor to be compassionate to the needy and to ‘help’ them for a greater reward. This led to the creation of what we call the ‘charity model’ whereby persons with disabilities are seen as objects of pity that are there to be assisted. It’s this model that correctly fits into the ‘beggars’ stereotype that has persisted over time.

However, this traditional way of looking into things wasn’t sustainable leading to professionals especially the medics wanting to ‘fix’ the impairment. For example, someone without a limb would be given a prosthetic or a wheelchair, in order to fix the impairment. However that’s not the case because human beings aren’t objects to be fixed. They are wholesome totality of the physical, psychosocial and spiritual.

Consequently, there has been a shift to what is now known as the social model that sees disability as a social construct i.e it results from society putting together a certain frame of mind in order to ‘see’ and ‘interpret’ the needs of those with various forms of impairment as underserving or without much return. This model proffers that you can only do so much medically to correct impairment.

However the most important bit is to ‘deconstruct’ the notions that provide a thinking pattern that negatively speaks to the expectations and therefore ill treatment of persons with various forms of impairment, including the manner in which the built environment is made, and/or how the natural environmental barriers can be overcome.

Such an endeavour is anchored upon the human rights based approach so that the basic necessities that any human being requires are seen as ‘entitlements’ that are inalienable. For example, the right to life, basic shelter, health, etc as contained in our bill of rights. In the same vein, article 54 of the constitution requires that a person with disability be entitled to be treated with dignity to be addressed and referred to in a manner that isn’t demeaning, to have access to education, public buildings and communication formats that are facilitative of their needs.

In terms of representation, the constitution requires that at least per cent of all members of the public in elective and appointive positions be persons with disabilities. This means that representation is a right and not a token or favour.

However, political parties still see differently due to the nature of our politics of patronage, thus perpetuating the charity model. There is therefore need to draw lines between the traditional charity model vis a vis the human rights based approach and, what is popularly known as political goodwill.

As a pioneer in representing the marginalised, people will have low expectations of you, subject you to a higher standard threshold, understate your contributions and achievements, assassinate your character in order to break you down and fit you in to the persistent stereotypes. However persons with disabilities are much more than society expects of them.

Such representation is still perceived as a form of giving alms to the less fortunate.
Siasa
1 year ago
by ISAAC MWAURA Columnist
Siasa
19 February 2021 - 05:00