Game of numbers: Why impeaching Ruto is not a walk in the park

• A look into the numbers in the Senate and National Assembly shows the bid by Lugari MP Ayub Savula to remove the DP could encounter unsurmountable hurdles.

• Despite the falling out within the ruling Jubilee party, Ruto still enjoys considerable support from a majority of senators and members of the National Assembly. 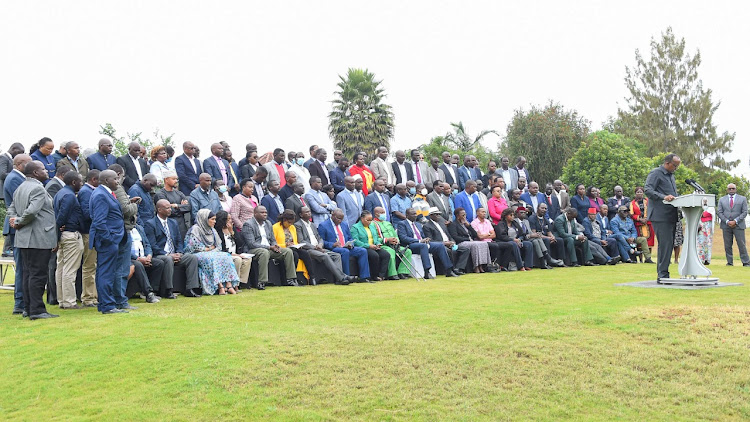 DP Ruto hosted 139 MPs from all political parties at the Karen Residence on February 8, 2021.
Image: DPPS

The quest to impeach Deputy President William Ruto is not a walk in the park as it involves marshalling numbers and could require an endorsement by the National Security Committee.

Governance experts say President Uhuru Kenyatta must first approve any motion seeking to remove the Deputy President since such an action comes with both national security and political consequences.

The Constitution says the Deputy President can be removed from office on grounds of physical or mental incapacity to perform his functions, gross violation of a provision of the Constitution or any other law and where there is serious reason to believe the DP has committed a crime under national or international law. He can also be impeached on any form of gross violation.

A look into the numbers in the Senate and the National Assembly shows the bid by Lugari MP Ayub Savula to remove the DP could run into hurdles, derailing his quest.

Despite the falling out within Jubilee Party, Ruto still enjoys considerable support from a majority of senators and members of the National Assembly. Uhuru has, however, brought in other parties into a coalition, and is also working With Wiper and ODM.

The DP has also won the allegiance of some MPs from the opposition and other minority parties.

Of the 349 MPs in the National Assembly, 172 belong to the Jubilee Party and Ruto controls close to 117 of them. The rest are allied to the Kieleweke faction that pledges allegiance to the President.

Kanu has 10, the Party of Development and Reforms, now UDA has four,  CCM has two, Maendeleo Chap Chap four, Chama Cha Uzalendo one,  Ford Kenya 13, Democratic Party one, EFP five and the Frontier Alliance Party one.

The others are the Peoples Democratic Party two, New Democrats one, National Agenda one, Muungano Party one,  Movement for Democracy and Growth one, Kenya Patriots Party two, Kenya National Congress two while the independents are 15.

The DP has also won over two Kanu MPs, the two CCM legislators, one from MCC, three from Ford Kenya, one from KNC and the majority of the independents.

Both Jubilee and ODM have said they are not party to the impeachment, which has been on the cards of anti-DP forces for almost two years.

Jubilee deputy secretary-general Caleb Kositany — a Ruto ally — told the Star, "To remove the DP is like attempting to fly to the sun."

The Soy MP said apart from the lack of numbers by those baying for Ruto’s blood, there is also a challenge in pinning down any charges.

“To get the numbers to impeach the DP is not easy and not achievable any time soon. There are some who have even tried to bring a motion of censure against Cabinet Secretaries but they could not get numbers, now they are talking about the DP. It is laughable,” Kositany told the Star in an interview.

Lawmakers say threshold to impeach the DP is too high as set in the Constitution.
News
2 months ago

For the impeachment motion to be tabled in the National Assembly, it must be supported by not less than 126 MPs who must append their signatures on the motion.

If the motion passes the first stage, the next hurdle would be to whip 233 MPs to vote in support of the motion.

If the motion is supported by at least two-thirds of all the MPs, the speaker shall inform his Senate counterpart within two days.

The Senate speaker is required by law within seven days to convene a meeting of senators to hear charges against the DP.

Senators can then resolve to form an 11-member special committee to investigate charges against the DP and table the report within 10 days.

The DP shall have the right to appear and be represented by his lawyers before the special committee during its investigations.

If at least two-thirds of all the members of the Senate vote to uphold any impeachment charge, the DP shall cease to hold office.

Ruto still has numbers in the Senate, especially among the Jubilee senators.

However, if the ruling party succeeds in kicking out nominated senators allied to Ruto, and then combines forces with Wiper, Ford Kenya, Kanu and Jubilee Kieleweke senators, then the DP will have slim chances of survival.

Former Majority leader in the National Assembly Aden Duale said they should not talk of the impeachment but instead should “bring it on”.

The Garissa Township MP said, “The much-talked-about impeachment has only been tabled and passed in bars and political rallies and no one has dared to table it in Parliament.

“The people who are always talking about impeaching the DP are failed politicians, brokers who are seeking attention. Let them bring it to the floor of the House if indeed they have grounds and numbers,” he told the Star.

“Some of these brokers are doing so to please their girlfriends, others are salivating for the position. Let them go and seek votes so they form the next government. Let them not talk of imaginary impeachment just for political capital. It is a tired venture,” Duale said.

MP Savula says he will table an impeachment motion if Ruto will not resign.
News
3 months ago

Mumias East MP Benjamin Washiali said, "The former opposition MPs should keep off the DP and start campaigning so that they form the next government."

He said the forces behind the impeachments have tried in vain to lobby Uhuru to sanction the removal of the DP so that they take over the position.

“Some of our brothers are like the hyenas who are jealously waiting for the hand that is carrying the meat to drop it so that they grab it and run away. I want to tell them to go to the forest and hunt for their own,” he said.

The ex-Majority whip in the National National said the threshold for impeachment of both the President and the Deputy President is too high to be achieved.

“The so-called disrespecting the President charge does not amount to grounds for impeaching the DP. But even before they take that route of impeachment, in which is I am sure they will not succeed because of the numbers in Parliament, they need to come up with reasons that are acceptable to Kenyans,” he said.

Mathira MP Rigathi Gachagua said the “imagination to impeach the DP” is far fetched, challenging Savula to “bring it on."

The close ally of the DP said the humiliation and persecution the DP has been subjected to by the state is too much for them to face impeachment head on.

“What have we not seen in this country? They have harassed us, persecuted us, killed our businesses, all in the name of trying to tame the DP. On this one, we are also telling them to bring it on,” he said.

Jeremiah Kioni, the Ndaragwa MP, said, however, while he has not been approached by Savula to sign the motion, impeachment would deal a blow to Ruto.

The Kieleweke MP, who is an ally of the President, said there could be MPs willing to support the motion.

“If Savula is able to get 126 signatures, the motion will be filed. And people will distance themselves from it as a party but members may want to exercise their space to validate. I have not been approached for signatures,” he said.

He added, “I have seen some calls from some quarters. But certainly it is a debate that must be heard a little more. People have not understood impeachment, it is going to be brutal. Once you are impeached, you are done.”