Capitol Hill insurrection and unsavoury consequences for democracy in Africa

Battered by a pandemic eroding fundamental freedoms, African democracy is in uncharted waters. Chaos in DC only aggravates the troubles

• Already, forces of tyranny are celebrating the violence in Washington as the final straw in the western democratic experiment and its exportation to the world.

• Whether in Europe and  Africa, American diplomats or observer missions are going to find it more difficult to sell the values of democracy. 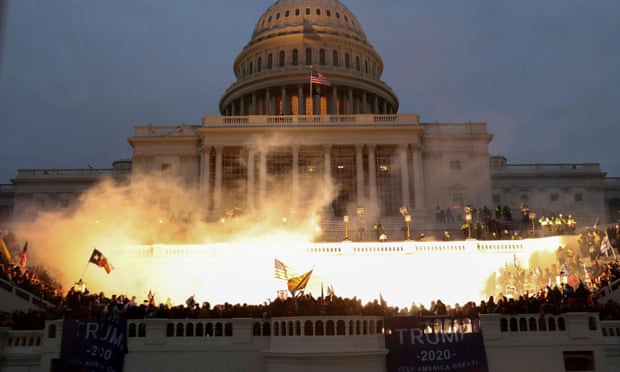 INSURRCTION: An explosion caused by a police munition is seen in front of the Capitol while supporters of Donald Trump storm the building on January 6.
Image: REUTERS

After President Donald Trump's supporters morphed into a riotous mob and stormed Capitol Hill, a majority of Americans will be hoping the country has hurtled into its final democratic crisis.

The events in Washington, DC, represent yet another paroxysm of political anger that has rocked America in the past few years. By count of victims, the insurrection pales in significance to previous bouts of violence. Its symbolic significance cannot be gainsaid: America’s most prized political attainment of the last 200 years — the peaceful transfer of power — was under unprecedented challenge.

Chances are that the deep-seated issues that prompted the mania in DC will be overshadowed by the blame game that has unfolded, culminating in the second and unprecedented impeachment of a president, Trump. From an international standpoint, observers of America’s democracy and her role in the world will be hoping recent events herald the unavoidable birth pangs of a new democratic era after a brief flirtation with populism. It is not hard to see why some might already be expressing a sigh of relief.

After a humiliating defeat in its stronghold of Georgia and the insurrection, the Republican Party now appears ready to end its pampering of Trump. It is hoped that the party’s brinkmanship, the most important institutional enabler of Trump’s excesses, has reached its end.

With the electoral dispute emanating from the November elections largely coming to a close, many will be hoping that President Joe Biden can reach across the political aisle and be the unifying force America has long needed. It is not an unreasonable prospect.

His background as a centre-left politician capable of reaching out to Republicans does certainly give him an edge over Barack Obama. In all this arithmetic, the assumption is that Trump and his ilk will stay neutered.

Kicked out of his favorite Twitter and a number of other social media platforms, the President finds himself unable to stoke anger in his legion of followers. Add this to his reportedly wobbly finances and the likelihood of being assailed by a litany of legal suits after leaving office and you have a cocktail likely to banish Trump into political oblivion in the coming months.

Even in the absence of Donald Trump, Trumpism has not faltered. When social scientists put the happenings in the American capital into a broader historical context, several culprits will be identified. America remains ravaged by Covid-19, its worst pandemic in over a century.

The pandemic has left nearly 400,000 Americans dead, the worst job loss since the Great Depression - many of which, experts agree, will not come back - and a growing dissatisfaction with the government’s health and economic response.

Coupled with an immigration crisis and unresolved racial tensions that are the scapegoat of many white supremacists, you have the makings of a political timebomb ready to be detonated by any demagogue. Not even the circumstances that led to the rise of Hitler, Mussolini’s march on Rome or many of the popular uprisings we have witnessed in recent years offer a similar historical parallel. It might very well be the case that we are beginning to see the full political consequences of the pandemic.

AN EXPERIMENT IN PERIL

Faith in the democratic experiment has historically been based on its grand ideals. The notion of unfettered freedom and the ability to resolve disputes through civil debate has a natural appeal. It explains why many see the attack on Capitol Hill as the ultimate affront to democracy and freedom. Confidence in the resilience of democracies has, however, tended to rest on quicksand. It is the triumph of hope over experience.

Reversals, more than gains, have tended to be the hallmark of the post-1990s democratic experience when the world last witnessed a sizable increase in the number of democracies. Should institutional leadership surrender in the face of an onslaught on norms, as witnessed with the Republican party in America, then you have the makings of an authoritarian system.

Americans may have reasonable expectations that their leaders will stand up to would-be tyrants and uphold national values, but as recent experiences have vividly demonstrated, not many are above the persuasions of power.

That Trump launched a frontal attack on virtually all norms in the rulebook for four years is testament to the fragility of the essential bulwarks against dictatorship and a template for future demagogues and tyrants elsewhere in the world. Whether the republic will come out of this black hole unscathed remains to be seen.

As Trump has faltered, so has American influence in the world. To be sure, the United States was already a hegemony in decline. With the rise of China and other global powers, the dominant trend of our time is a shift towards bi-multipolarity.

The series of policy disasters by the Trump administration has only served to shorten the ‘Unipolar Moment’. Still, America remains the pre-eminent model and advocate of democratic governance in the world. Using her soft and hard power, US administrations have since the fall of the Iron Curtain supported various nascent democracies and helped keep dictators in the African continent and elsewhere in the world at bay. Although not above reproach, American leadership has heavily contributed to the world order we now find ourselves in.

It is unlikely the Biden administration will abandon this traditional role. Still, recent unfoldings have dealt a hefty blow to American soft power. Whether in Europe and in Africa, American diplomats or observer missions are going to find it more difficult to sell the values of democracy.

Already, forces of tyranny are celebrating the violence in Washington, DC, as the final straw in the western democratic experiment and its exportation to the world. It will not be surprising to see other inchoate ideas and untested models being floated as alternatives for the African continent.

For those ‘Africanists’ deriving their largesse from these forces, some of which are beginning to gain a foothold on the African continent, they have gotten the ammunition to add oxygen to the media and ideological fire.

As the world’s attention has remained fixated on Washington, DC, and the Covid-19 pandemic, limited international focus has been dedicated to the political happenings on the African continent. Uganda has just been through its most brutal elections since President Yoweri Museveni came into power some 35 years ago amid reports that the United States pulled out its observer mission.

In events reminiscent of the Togo polls last year, it is likely Museveni will continue his illegitimate hold on power. Elsewhere in the continent, those opposed to democracy might just have received the greatest shot in the arm yet. In a recent interview on CNN, Museveni conflated peaceful protesters who have been brutally suppressed in Uganda to the ‘insurrectionists’ in DC.

Despite the fall of autocrats from Sudan to Zimbabwe over the past few years, democratic freedom in Africa has faced considerable headwinds. Already caught in the throes of a pandemic that is quickly eroding fundamental freedoms, democracy in the continent is in uncharted waters. The chaos in DC only serve to aggravate these troubles.

Loyford Mutuma is a political scientist and economist