Despite having young MPs in the city, it is the 70-year-old leading the BBI process

• Kamanda is accompanying ODM leader Raila Odinga across Nairobi and some parts of Central Kenya to popularise the Building Bridges Initiative.

• Although they are supposed to lead campaigns alongside MPs Simba Arati (Dagoretti North) and Tom Kajwang (Ruaraka), it’s Kamanda commanding the process. 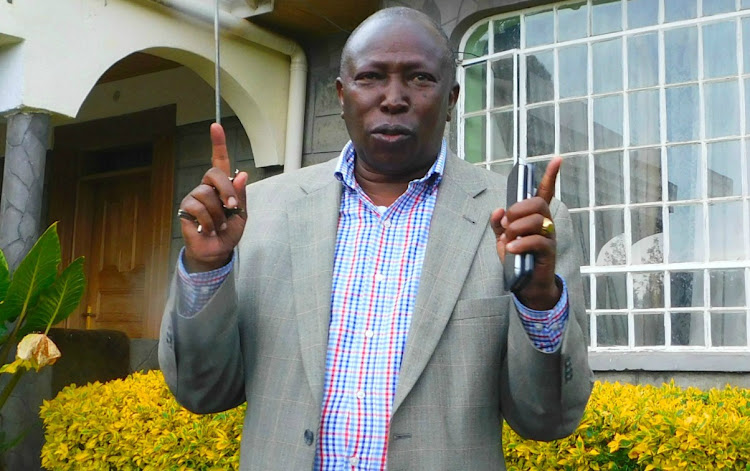 Jubilee nominated MP Maina Kamanda has emerged as the face of the Kikuyu support for Raila Odinga since the March 9, 2018, handshake. He identifies with the Kieleweke faction of Jubilee Party supporting President Uhuru Kenyatta.

The former Starehe MP was among the few Jubilee politicians alongside Kirinyaga Governor Anne Waiguru who publicly supported ODM’s Imran Okoth in Kibra’s by-election against their own candidate McDonald Mariga. They defended their actions by branding Imran 'the handshake candidate'.

Now, Kamanda is accompanying the ODM leader across Nairobi and some parts of Central to popularise the Building Bridges Initiative. Although they are supposed to lead campaigns alongside MPs Simba Arati (Dagoretti North) and Tom Kajwang' (Ruaraka), it’s Kamanda who is steering the process.

In November, he said Raila is the right man to take over from Uhuru when he retires in 2022. He spoke when he launched the signature collection drive in support of the BBI constitutional review bid in Kibra, Nairobi.

However, while Kamanda has publicly supported Raila and the BBI process, he appeared to be in foreign territory on Thursday when the ODM leader sustained his recent onslaught on the Jubilee government which he serves.

But can Kamanda help Raila get extra support from his traditional base in Nairobi?

Embakasi North MP James Gakuya says the answer is no, and even if he would, not be more than three per cent.

“Raila tagging along Kamanda is of no help. In any case, it is tainting Raila as we saw at Burma market [heckling]. He can use money because anyone will show up where there is money, but that does not mean winning someone’s’ heart. The people of Nairobi have long made up their mind [and] decided what they want,” Gakuya said on the phone.

Governance expert Charles Kipkulei agreed further noting that Kamanda's clout in the city has significantly waned over the past few years and he doesn't add any tangible political value to Raila, " whose support base is not dependent on other political actors".

"The actual obtaining situation is a reverse scenario where Kamanda is depending on Raila for hopes of political survival. At this point in time, the persons who can influence the direction of the BBI wave are the young vibrant leaders who have popular appeal and this is the same for the Mt Kenya community in Nairobi whose voter behaviour mimics that of their counterparts in Central Kenya."

"To get the GEMA vote in Nairobi, therefore, it will require the direct intervention of President Kenyatta and other vibrant leaders many of whom have, however, openly or indirectly hinted opposition to the BBI process," Kipkulei said.

And this is despite Kamanda’s experience as a politician, particularly in Nairobi. He deservedly takes the veteran politician tag.

Born in 1951, Kamanda started off his Nairobi hustle in the hotel business, working as an assistant manager at Stag's Head Hotel and managing Hillcrest Hotel.

He joined politics in 1979, when he was elected Ngara councillor, a position he held until 1997. Between 1988 and 1992, he was Nairobi Kanu branch secretary.

In the 1997 general election, Kamanda was elected Starehe MP to succeed Stephen Mwangi, who had won the seat in a by-election in 1994 on the Ford Asili ticket. He defended his seat in 2002 on the Narc ticket.

He, however, lost to Bishop Margaret Wanjiru (then of ODM) in 2007. A recount showed Kamanda had won and a by-election was ordered. Wanjiru went on to win the by-election in September 2010.

Kamanda would later make a comeback in 2012 through the Jubilee Coalition wave but again lost the seat in 2017. This is after the Jubilee Party Appeals Tribunal declared musician Charles Njagua, aka Jaguar, the winner of the Starehe nominations. The tribunal’s chairperson Faith Waigwa said there was “compelling evidence” a returning officer altered the results.

He got reprieve when Jubilee nominated him to the National Assembly, a nomination his bitter rival Wanjiru claims was reserved for people living with disabilities and women.

Despite there being young MPs in the city, it is the 70-year-old Kamanda leading the BBI campaigns.

Kamanda hosted a delegation of members from Agikuyu community in meeting Imran.
News
1 year ago

Some traders were seen carrying a wheelbarrow.
News
3 months ago