Democracy has failed in East Africa

In Uganda, there were electoral malpractices and open use of state machinery in favour of the incumbent.

• There seems to be no let up in stifling of democratic space by the enemies of democracy in the region.

• It is up to the citizens now to take a stand against the dictatorial tendencies and say enough is enough. 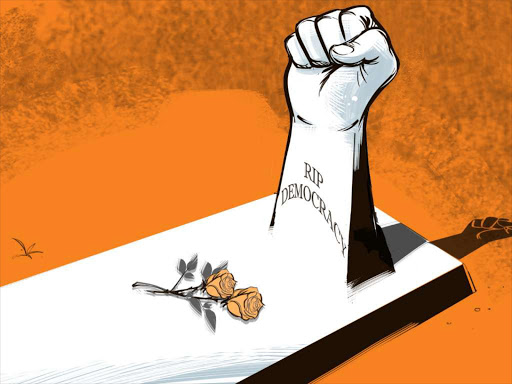 Last year, the world witnessed how Tanzania blatantly went against its own constitution and violated its citizens’ right to choose a leader in a free, fair and just election.

In what can be termed as an affront to democracy in the country, a string of civic space stifling events that had far-reaching consequences on the outcome of the election were reported. From restricting civil society to gagging the media, the country experienced classic dictatorial tendencies of a regime that was ready to go against all laws to retain power.

Even parties that should be free to campaign were restricted and had their leaders constrained in their political activities. Democracy failed and the electoral result was hugely inflated in favour of the ruling regime.

This week Ugandans went to the polls. Prior to voting, the country witnessed outright electoral malpractices and open use of state machinery in favour of the incumbent. The opposition leaders were roundly denied the right to campaign and on several occasions arrested and incarcerated.

Innocent civilians were roundly beaten up, maimed and killed for participating in opposition rallies. Police were used to intimidate and when things became tougher, the military was unleashed to further terrorise the citizens. A few days to the election, media freedom was grossly violated, including shutting down of all social media platforms. Democracy failed again and Ugandans will all live to wonder what would have been had the political playing field been fair.

In Rwanda and Burundi, the situation was no different during their elections. In Rwanda, President Paul Kagame and his cronies changed the Constitution to allow him vie again. They silenced critics and forced the country to entertain presidency for life.

Opposition figures were not free to campaign as they wanted and the media activities were restricted. In Burundi, President Pierre Nkurunziza, now deceased, refused to step down after the second term and forced his candidature on the people. Bloodshed followed and many Burundians lost their lives.

Despite the chaos and mayhem, the regime refused to let go of power and insisted on its legitimacy. Democracy failed again in these countries and those in power today are considered to be in office through political manipulation and extra legal means.

Kenya, widely considered as the big brother in East Africa, has equally had its failed democracy stints. For the first time in Africa, presidential results were annulled by the courts in 2017. The Supreme Court found that election results were interfered with. In the resulting re-run of the presidential election, the opposition sighted electoral injustices and boycotted. This led to a one-sided election result and subsequent swearing in of two presidents. Democracy failed and the country ended up split right down the middle.

In Uganda, it is clear that the results will in no way reflect the free will of the people. The ruling regime has stopped at nothing to ensure they manipulate the presidential results in favour of President Yoweri Museveni. State capture has been at its best and security authorities have displayed top-level impunity in their operations.

At one point, the Inspector General of Police openly admitted to beating up journalists and said the cops would continue to do so. Without due regard to the rule of law and tenets of democracy, all sorts of electoral violations have been committed and in the process, denying Ugandans a chance to experience real democracy.

There seems to be no let up in stifling of democratic space by the enemies of democracy in the region. It is up to the citizens now to take a stand against the dictatorial tendencies and say enough is enough.

However much electoral democracy is criticised in Kenya, its neighbours have a long way to go.
Siasa
8 months ago
by HUSSEIN KHALID Executive Director, Haki Africa
Siasa
16 January 2021 - 05:00