Baba Yao: An opportunist, a strategist or both? 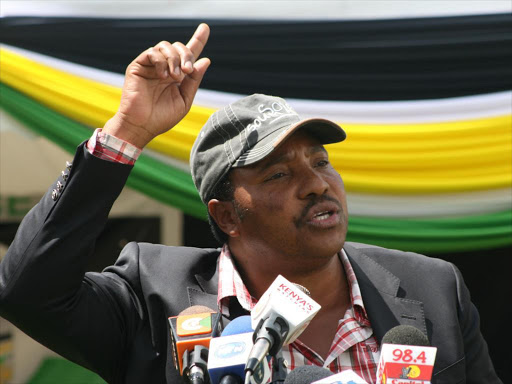 The announcement by former Kiambu Governor Ferdinand Waititu that he would run for Nairobi governor may not have come as a surprise to many.

It wouldn't be the first time Waititu grabbed an opportunity that has presented itself to seek an elective seat.

Waititu or Baba Yao — a moniker that was added to his official title — has run for two parliamentary seats that fell vacant and won both times.

When Nairobi Governor Mike Sonko was impeached by the Senate on December 18, 2020, another opportunity presented itself and Waititu wasted no time in declaring his interest in standing in the ensuing by-election.

The Senate voted overwhelmingly to uphold four charges brought against Sonko by MCAs, which included gross violation of the Constitution, abuse of office, misconduct and crimes against national law.

Waititu was also impeached in the same manner. The Senate voted for his removal  on January 29, 2020 after finding him guilty of three charges by the  Kiambu County Assembly.

Waititu became the first governor to be found guilty by the Senate. The three main charges were gross misconduct, abuse of office and engaging in corruption. (Embu Governor Martin Wambora's impeachment was overturned by the courts)

The former Kiambu governor has touted himself as the best person to take over the leadership of Nairobi county.

“I am offering myself to serve the people of Nairobi on an independent ticket,” Waititu said when he announced his candidature.

“Touted as a ghetto politician, he could appeal to many Nairobi residents come voting day. His instant justice gratifies many, especially hawkers, mkokoteni pushers and largely hustlers who might want a defender against city askaris,” he said.

He said Waititu has been a beneficiary of tragedies adding that his ascent to political positions has been amazing.

“Baba Yao is a canny politician with a mastery of jungle law and a beneficiary of political tragedies,” Orogo said.

Political commentator Joseph Mutua said, however, Waititu is seeking the attention of Deputy President William Ruto in his quest to become governor for Nairobi.

“We know before Kiambu MCAs impeached him, he was wielding a lot of power in pushing Deputy President William Ruto's agenda. He has since lost that influence. It is even said that the DP and his allies deleted his contacts,” he added.

Mutua said Waititu, by declaring interest to run for the governor seat, wants to show the DP and his allies that it was too early to write him off.

The Registrar of Political Parties Anne Nderitu has already cleared Waititu for the race and stated that her role was to ensure that the former Kiambu governor had resigned from a political party within the stipulated period. Waititu will be run as an independent candidate.

Leaders and legal experts have given varied opinions, some saying Waititu and Sonko are barred by law from contesting any seat unless the courts quash their impeachments by the Senate.

Some have said said a judicial interpretation was required as Kenyans might not comprehend the complex legal questions arising from Waititu’s candidature.

Waititu had earlier accused the IEBC and the Ethics and Anti Corruption Commission of engaging in a smear campaign against him.

He explained that though he faces a corruption case, he has not been convicted of any offence —innocent until proven guilty in a court of law.

Born on January 1, 1962, Waititu was a humble sand seller in Njiru, Nairobi, before trying his hands at politics.

His political career began in 2002 when he was elected to City Hall as a councillor for Njiru ward on a Kanu ticket. He was the only Kanu councillor at City Hall.

He then became deputy mayor, after about four years. While at City Hall, he became a fierce rival of then Embakasi MP David Mwenje, now deceased. The two were engaged in numerous confrontations but Mwenje did not seek re-election in the 2007 General Election.

Waititu contested the seat on PNU but lost narrowly to Mugabe Were (ODM), who was killed in unclear circumstances after assuming office.

The vacancy prompted a by-election, which Waititu won after trouncing ODM’s Esther Passaris.

When Parliament was dissolved ahead of the 2013 General Election, Waititu declared interest in the Nairobi governor’s seat.

Many dismissed him as a joker, owing to his frequent clashes with the police. He was once captured on television cameras hurling stones at police and slapping an alleged land grabber.

Another opportunity to seek an elective position presented itself in 2015 following the fatal shooting of Kabete MP George Muchai.

Waititu vied for the seat and won, then announced that his intention was to send Kiambu Governor William Kabogo packing.

He trounced Kabogo in Jubilee nominations garnering 353,600 votes against Kabogo’s 69,916.

He was known for giving handouts and casual jobs to young recovering alcoholics, a controversial policy. He also led the charge against illicit liquor in Kiambu, smashing legitimate businesses, as well as others

When he was impeached, Kiambu Deputy Governor James Nyoro then assumed office as stipulated by the law.

Says that although he faces a corruption case, he has not been convicted of any offence.
News
3 months ago
by ALLAN KISIA Political Writer
Siasa
10 January 2021 - 08:46