Why Somaliland deserves recognition as a republic 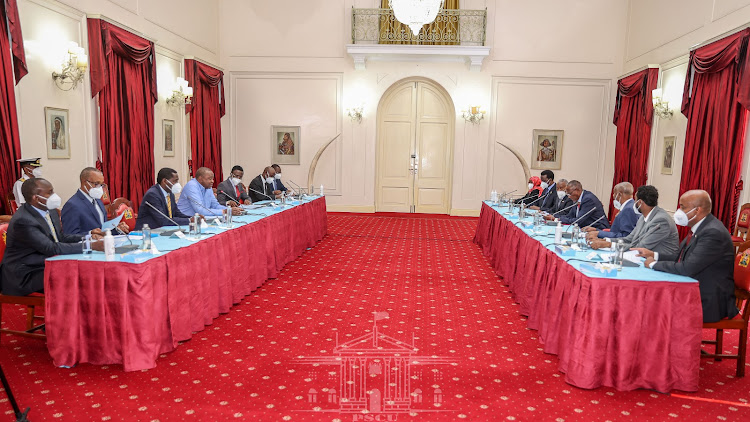 President Uhuru Kenyatta and his Somalinda counterpart Muse Bihi lead their delegations during a bilateral meeting on December 14, in Nairobi,
Image: PSCU

After a bloody civil war in January 1991 Siad Barre’s 21-year regime was overthrown in Somalia.

The northern half the country declared its independence as the Republic of Somaliland in May 1991.

This article summarises the main arguments for the propriety of such a declaration and its recognition as an independent state under international law.

The State of Somalia, which came into existence in 1960, resulted from a merger between two independent states — the Northern Somaliland, a British Protectorate and Southern Somalia, an Italian Trust Territory.

General Siad Barre took over the administration in a coup in 1969 and led the country through a calamitous period of chaos and repression until he was deposed by the combined might of several liberation movements such as the Somali National Movement, which had been waging its battle against his regime since 1981.

After his overthrow, the south has been a Habbesian nightmare of interclan fighting whereas the independent Somaliland remains the most stable region in the Horn of Africa.

Somali society is comprised of various clans such as the Digil, the Gabooye, the Rahanweyn, the Dir , the Isaaq, the Hawiye and the Darood. The dynamics of interaction among them determines the distribution of political power in Somalia.

The primary issue is the extent to which the assertion of independence is a valid manifestation of sovereignty over territory and thus forms a legal basis for the formation of a state under international law.

A survey of the applicable law reveals that the issue can be broken down into the question of the nature of Somaliland’s sovereign rights before and after the act of union of 1960 and the extent to which this will be dispositive of the viability of the union.

The nature of the treaties leave no doubt at all that the Somali clans retained a large measure of sovereignty. The capacity to conclude treaties is itself an attribute of international personality.

Old international law may have considered such treaties as not international, but the contemporary standards exhibited by the World Court in the Western Sahara case in 1975 reject such views. As a result, the Somali clans existed as international persons.

The two territories were independent countries with no links between them. There was no unifying force from within. On the contrary, two external factors served to bring about this precipitate union. The first was the proposal by British Foreign Secretary Beven in 1946 to create a “ Great Somalia”. The second was the cession of the Haud and Ogaden to Ethiopia by Britain in 1954. Both served as stimulants of national identity.

When the union was signed, there were a number of legal loose ends. Since the North and South were independent countries, they could unite only by an international treaty as in the case of the Germanys. Such a treaty was never signed. The Somaliland “ North” passed a “ union law” that did not have any legal validity in the south and the constitutional requirements regarding the election of the President were never completed.

Conscious of such legal loopholes, the National Assembly attempted to remedy the situation by passing a retroactive “ union” law in January 1961.

The absence of the legal basis for the union is clear and convincing. Furthermore, “Somaliland” decisively rejected the draft constitution in a referendum evidencing a permanent rift between north and south.

It has always been an accepted rule that oppression, including the deprivation of basic rights such as the right to life, justifies secession. Hugo Grotius mentions that a ruler who has shown himself to be the enemy of the people can be deposed.

The primary duty of the ruler is to safeguard the welfare of the citizens and once he/she violates that cardinal rule, he can be deposed.

In International law, human rights are embodied in various treaties such as the International Bill of Rights and are also acknowledged to be rules of jus cogent. Accordingly, there is a right to secede from a state, if the political establishment engages in such gross and grave human rights violations including genocide. This finds support among many jurists. The test to determine the extent of deprivation of human rights and the legitimacy of secession is whether a group is being targeted due to its ethnic, cultural of other unique characteristic.

The Siad Barre “ Afweyne” regime practiced genocidal attacks on the northern clans, especially the Isaaq. The bombing and shelling of two cities in Hargeisa and Burao alone killed 150,000. Another 3,000,000 fled to Ethiopia.

African Watch reports that inhuman practices were committed on women and children. Most of the people killed or displaced were the Isaaq. The government forces also looted and laid land mines in “ Somaliland”. Several US government documents, including the State Department’s Human Rights reports, attest to the massive violations of human rights such as right to life and habeas corpus. Under these circumstances the SNM and the people in “ Somaliland” had a legal right under international law to secede in their self-preservation.

Article 1 of the International Bill of Rights refers to the right to self-determination, as does the UN Charter in Article 1 and 55.

First, one of the reasons behind Somaliland’s assertion of independence is the incompatibility between northern and southern regions. The incompatibility arises from distinct colonial experiences, which contribute to a unique identity.

Where the reason for self-determination claims lay in historical experiences that are grounded in colonialism, there is no reason to deny the right to the people who wish to exercise it.

Second, when the assertion of self-determination does not result in changes in international boundaries and does not pose a threat to inter-state peace, it ought not to be denied to achieve the short-term goal of doctrinal uniformity. Somaliland has expressly stated that it accepts the boundaries of the British protectorate in 1960.

Third, when the assertion of self-determination is more conducive to inter-state peace, its validity is strengthened manifold. It is to be noted that Somaliland has the potential of solving longstanding regional disputes with Ethiopia, Kenya and Djibouti, due to its acceptance of colonial borders and close ties with Ethiopia.

First, North “ Somaliland” had overwhelmingly rejected the unified constitution in a referendum. Second, the UN practice of conducting plebiscites prior to seceding, as in the case of British Togoland. Under these circumstances, right to self-determination appears to be applicable to Somaliland. The exercise of such a right should also enable it to claim its independence.

Old International law settled questions of title by the tool of recognition.

Theories such as “ declaratory” and “ constitutive” were used to debate about the nature and function of recognition. However, in contemporary international law, recognition alone is not dispositive in determining the legal status of states. Other norms of a humanising character have entered the process of making states.

To the extent however, that recognition enables a people to internationalise their claims, it is useful.

A head count of all authorities shows the declaratory view prevails, that recognition only confirms the fact of existence of a state. It is not practical politics to refuse to recognise a state if it possesses attributes of statehood. The attributes of statehood, as laid down in the Montevideo Convention, are a government, territory, defined population and a capacity to enter into international relations.

It is evident that Somaliland possesses all the attributes. Its distinct people occupy their traditional territory and the government has effective control over the population. Under these circumstances, the recognition of Somaliland is an international imperative.

As indicated above, Somaliland has renounced territorial claims on other countries that the earlier Somalia had subsumed under its banner of “Greater Somalia". It has accepted the colonial borders.

As is well known, Somalia irredentism was a major source of instability on the Horn of Africa and its removal paves the way for peace stability and prosperity in the region. Furthermore, the acceptance of colonial borders is in accordance with the AU policy.

Fears of balkanisation as a result of the recognition of Somaliland are unfounded since no new border is being created as, in fact, for the first time colonial borders troubled borders are those of Somaliland.

Lastly, the International community is under an obligation to recognise because of the obligation to protect and promote human rights under Articles 55 and 56 of the UN Charter. Only international attention can assist the fledgling state to stand on its own feet.

The birth of Somaliland is an inevitable result of a distinct colonial experience. It is also the result of extreme economic exploitation and human suffering. The irredentist policies of Somalia also contributed to the alienation of the northern population, which never acceded to the union in the first place.

While the past cannot be undone, the international community has a rare opportunity to bring peace and prosperity to the Horn.

By a single act of recognition, it can end the sad sage of human suffering, enhance the prospects for peace in the region by putting an end to the Greater Somalia concept, and enable the people of Somaliland to reclaim their future.