BBI is intended to right past wrongs, not start wars

• Each denial of won victory has always been accompanied by violence, bloodshed, destruction of property and deaths

• It was with this realisation that Uhuru, prompted by the powers that be, including his own conscience, met his brother less than half-way and we had the historic handshake. 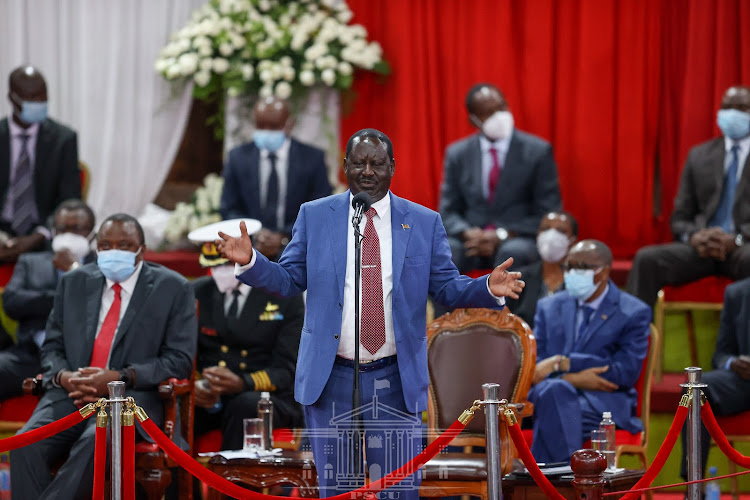 NO PRESIDENTIAL DECLARATION: ODM leader Raila Odinga at the BBI launch at the Bomas of Kenya on October 26.
Image: PSCU

The proponents of BBI have perilously allowed master opportunists to nearly succeed in hijacking the BBI process and turning it into what it was not intended.

The key term here is “nearly” because these opportunists have not succeeded and will likely not succeed. Their efforts, however, may result in more harm than any good to come out of it.

Lest we have forgotten, BBI journey started before it even started and one can trace it back to the 1990s when elections in Kenya became a mockery. We cannot say to go back to the 1980s, 70s and 60s because back then we had no presidential elections to speak of.

Unfortunately—and fortunately for all of us, the tide of global quest for democracy was too strong to withstand so Moi reluctantly allowed our resumption to multi-party politics by repealing Section 2A.

It is a column, so no space to go into what the “quest for democracy” entailed in Kenya so let’s just leave it at numerous detentions without trial and torture of the leading proponents of the liberation struggle such as Kenneth Matiba, Charles Rubia and Raila Odinga, this besides the bloodshed and deaths that continued long past repeal of Section 2A.

However, even as Moi was allowing multi-party back in 1992, he was laughing to himself—well, alongside the “system” then knowing fully well there was no one who was going to dare have him defeated at the polls—and he was not.

So, in election after election after overcoming Mt. Kenya forces that sought to prevent him from ascending to the presidency, Moi “won” each one of the elections by more and more dwindling margins such that in none of those elections did Moi win majority of the vote, even with the active and aggressive assistance from the grandparents of vifaranga vya computa.

The dwindling of margins of “victory” was not on account of those cooking the numbers not being able to make them large, but this was due to more and more people showing up to vote and therefore overwhelming the system—keep in mind we here talking about the older voting systems, not the most recent where one can play with numbers like a kid in a play store and come up with any desired results.

By 2002, the hunger for change was so high such that the system just stood by and watched as then neophyte “Moi project” was clobbered at the polls.

As I have often said, this was only because the big fight was inhouse. Had Raila been the one going against Uhuru, the latter would have been rigged in as president.

It is also likely Musalia Mudavadi would have followed Uhuru and Gideon Moi following Mudavadi, meaning Raila would have likely been shut out completely, not because he could not garner majority vote, he has and would have but because the system would not have wanted him near State House as president.

You would have to be one with no sense of right or wrong not to see why doing this to Raila is and would have been evil besides being wrong.

This is doubly so when coupled with the fact each denial of won victory has always been accompanied by violence, bloodshed, destruction of property and deaths—all because of efforts to stop one man from becoming president after majority of voters elected him on at least two of those occasions.

It was with this realisation that President Uhuru Kenyatta, prompted by the powers that be, including his own conscience, met his brother less than half-way and we had the historic handshake.

BBI is therefore here to first and foremost not to give the presidency to Raila “through the backdoor” but to open the door wide open and say, “Pole na Karibu Sana.”

Does Raila need BBI as badly as people think?

To a large extent, the success of BBI is more crucial to Uhuru than it is to Raila.
Siasa
4 months ago