Sonkonization of Kenyan politics and the dangers it poses

• Because of its quick-fix nature, this brand of politics is 'quick on the hand', readily giving handouts for political support, which translates to little or no accountability

• The net effect of this is that financial probity in the management of affairs is thrown straight out the window. 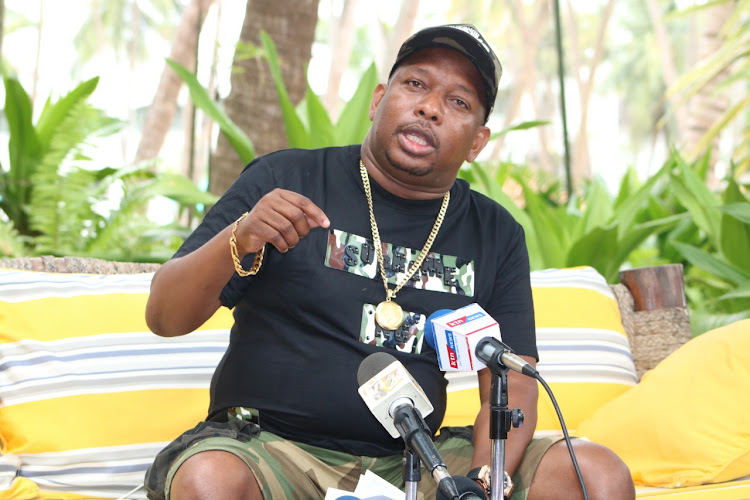 In the wake of the divisive Msambweni by-election, one side of the political divide taunted the other with words like “the politics of liberation has ended, Kenyans are no longer interested."

It was a not-so-subtle dig at ODM chief Raila Odinga’s often-quoted credentials as a giant of the Second Liberation, and his many years in detention as a prisoner of conscience.

The peddlers of this narrative forgot to tell us what new doctrine now rules the political landscape, counter to the liberation politics. But it didn’t take too long to figure it out, for the same people singing the tune of “detention politics don’t sell anymore” were soon flocking together to save the job of the now-former Nairobi Governor Mike Sonko.

The underlying message, therefore, was that politics has moved from 'principles and liberation' to the 'Sonkonized' variety. But in the Tangatanga world, where irony is an alien concept, those trying to save Sonko’s job in the Senate were also the ones who shot up sharply to try and stop the ICT people at Parliament from playing clips that had Sonko going on a profanity-laden tirade from a past moment of anger.

The wisdom behind it was that their children at home would watch it, and it wouldn’t be healthy for their young minds. I’m not sure how one person can be good as a leader but the children have to be sent into hiding as soon as he begins to speak!

It is quite unsettling having to watch the CEO of your county punching walls, lying in the streets in what looks like a drunken stupor, and unleashing a high-voltage tirade, in words that previous generations attributed only to madmen.

That is until you consider the fact that the leader in question, despite his disturbing antics, has been elected by nearly a million people from the most enlightened part of the country. If indeed the politics where principles and liberation credentials elevated people to high office has run its course, the rise of the alternative is disturbing.

In the early 90s when many of us were political party youth wingers, we faithfully, and at no fee, served the Second Liberation heroes, on the collective premise that they would deliver the country to Canaan in our lifetime. The ideology revolved around shared prosperity for the whole country, not just our small corners of the land.

It is possible that my generation has finally entered the period of liberation-fatigue, while the younger voter of today obviously can’t tell the difference between those who went to Kamiti for a good cause and those who went there for murder.

The gap left by the fatigue of the old generation and the ignorance of the new generation is the fertile ground upon which politics has become Sonkonized: This a move towards quick-fix leadership offering instant solutions. It's represented by flashy leaders with yellow metallic objects around their necks, and wearing shoes that look like bleached crocodiles.

The common thing about this brand is that you can’t tell much about these leaders: where they went to school, what they did before running for office or how they made their money. Quite often, they also offer social services to the population, as did Jamaica’s Dudus Coke and Colombia’s Pablo Escobar.

In terms of sustainability, nothing is more ridiculous than an elected leader, given the mandate to improve the livelihoods of a large part of the population, using his private organisations to extend similar services to only a section of the population. And this is the first problem with Sonkonized politics!

The second is that because of its quick-fix nature, this brand is 'quick on the hand', readily giving handouts for political support, which translates to little or no accountability to the voter.

Not many politicians remember to pay homage to their electors, if they bought their way up! The net effect of this is that financial probity in the management of affairs is thrown straight out the window.

The third, and worst, is that this brand tends to run very chaotic ventures.

A former executive of Nairobi county, testifying at the Sonko impeachment hearings in the Senate, gave intriguing details of a boss ruling by blackmail, threats, micromanagement and an absolutely insecure personality.

Ultimately, it was difficult to have a deputy, and most senior staff and executives were hired on short-term contracts or had none. Given how the vote went, it is safe to say that President Uhuru Kenyatta and ODM leader Raila Odinga summoned their handshake troops and gave the order to throw Sonko under the bus.

As it stands, with Sonko and Ferdinand Waititu (ex-governor of Kiambu) gone, that is two down, but will it be the end of that brand of leadership? Perhaps it is time to examine what human resource and political gaps within political parties and the entire electoral system allow for the rise of that kind of leader.

Uhuru, Raila and other party principals must be told it is cheaper to tighten their nomination processes to weed out certain types of leaders, rather than carry out expensive impeachments and by-elections.

As for the voter, the take-home from all the drama is that the said brand of leadership neither builds institution nor leaves behind tangible development. It thrives on hawking short-term hope, while enriching itself, then disappears in a fleeting second. Incidentally, just last week, I was reading the two volumes of the Moi Cabinets, published by the Kenya Yearbook Board.

Obviously, many in the first Moi Cabinet were inherited from Kenyatta’s, so basically, the profiles of members of Mzee’s Cabinet were there too. What amazed me was just how educated the early independence Cabinet was. There was a conscious effort to find the best people for the job, and many Kenyans returning from studies abroad found the government waiting with open arms for them.

It wasn’t until Moi took power that semi-literate people with no understanding of their jobs found their way into the Cabinet. Be that as it may, you can tell that voters of the early days of Independence had a keen eye for talent and sharp intellect (Cabinet members were elected MPs).

That the voter of today finds characters like Sonko and Waititu not just fit for elective office, but qualified to be CEOs of their counties should worry everyone. It means that rather than our politics evolving from the quick-witted people who formed the core of our leadership immediately after Independence, through the brave Second Liberation warriors, we have somehow effortlessly managed to regress via Sonkonization!

Sonkonization of Kenyan politics: The rise and fall of Mike Sonko

Sonko is leaving the scene in the same manner and drama that he came in with.
Siasa
10 months ago
by COLLINS AJUOK
Siasa
25 December 2020 - 00:00