Somalia elections at centre of severing relations with Kenya

Mogadishu on Monday cited interference with its internal affairs and violations of its sovereignty.

• While Bihi’s visit might have offered Somalia an opportunity to escalate the row, the development has more to do with domestic politics than bilateral relations.

• President Mohamed Farmaajo is facing an election in February, and is having a hard time to convince all the federal states to participate. 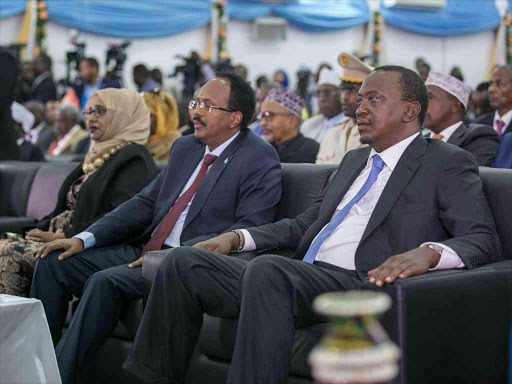 President Uhuru Kenyatta and his Somali counterpart Mohamed Abdullahi Farmaajo, during his inauguration in Mogadishu, Somalia in 2017
Image: FILE

Kenya and Somalia have severed diplomatic relations, which didn’t come as a surprise.

Mogadishu on Monday cited interference with its internal affairs and violations of its sovereignty.

The development followed the visit of Somaliland leader Muse Bihi Abdi, on President Uhuru Kenyatta’s invite. Somaliland is a breakaway region in northern Somalia, which has been seeking statehood for close to three decades.

It, however, emerges that while Bihi’s visit might have offered Somalia an opportunity to escalate the row, the development has more to do with domestic politics than bilateral relations.

President Mohamed Farmaajo is facing an election in February, and is having a hard time to convince all the federal states to participate.

Hasan Mohamed, a Somalia security and political analyst, told the Star that Somalia wants to frustrate Kenya so that it abandons Jubaland to help President Farmaajo re-election bid.

He faces obstacles in Jubaland and Puntland and mounting pressure in Hirshabele and Galmudug states.

Somalia Prime Minister Mohamed Hussein Roble was on Tuesday in Galmudug for talks over election standoff after his meeting with Puntland president Said Abdullahi Dani failed to reach consensus.

Dani is reported to have — in support of his Jubaland counterpart — demanded that the federal government withdraws troops from Gedo region, Jubaland.

President Ahmed Madobe insists elections won’t happen in Jubaland until the federal troops leave, and he gets control over some administrative units.

Jubaland says the troops are destabilising the region’s security and that they are being used to help Farmaajo rig the election. Mogadishu, however, says the forces are guarding the border with Somalia.

Farmaajo is feeling the election heat right in the heart of Mogadishu. There were opposition demonstrations on Tuesday in which four people were killed after forces opened fire at protestors.

Major roads were on Thursday sealed off by security forces amid political tension.

Council of Presidential candidates has also called for the delay of supposed weapons and ammunition delivery from Turkey, saying arming the Haramad Unit maybe part of an alleged plot to rig the polls.

Hassan further notes that if Farmaajo loses in the election, diplomatic relations will resume because the issue of Jubaland will not longer be a political agenda. However, if re-elected, the ties will further be strained.

Politically, Kenya will not abandon Jubaland because it is its brainchild and buffer zone, says Hassan.

His reelection, is, however, a tall order as no sitting president in Somalia has retained power since 1991.

The international community, opposition candidates, including two former presidents, Jubaland and Puntland are all sustaining pressure on Farmaajo to reach an agreement with the opposition and the two federal states for free, fair and transparent elections.

Rashid Abid, a Horn of Africa analyst, questioned Somalia’s decision to cut ties with Kenya, saying Ethiopia has troops in Somalia, has meddled in Somalia for over three decades, has deeper ties with Somaliland and even a diplomatic mission yet Mogadishu is yet to severe relations with Addis Ababa.

“Let’s be honest the crisis in Kenya-Somalia ties is Farmaajo’s antipathy to Kenya and Jubaland,”Abdi said.

Hassan corroborated this saying, Bihi has also met with Ethiopian Prime Minister Abiy Ahmed and Somalia did not object about the meeting.

“It is important for people to know that back in 2006, when Farmaajo was launching his presidential bid in Nairobi, his political campaign mantra was Ethiopia is Somalia's public enemy number one”

“When he took over, he chased retired Gen Gabre [Heard] who by then was a senior IGAD official. But then he made an about-turn and mended ties with Ethiopia when Abiy took over. When he realised Jubaland and Puntland were a stumbling block to his re-election bid, he started blaming Kenya. What we are seeing now is part of that game plan, use Kenya as a campaign issue just like he used Ethiopia in 2016,” Hassan says.

By recognising Somaliland, John Gachie says Kenya is sending a message to Mogadishu — with Hargeisa as a kind of leverage — that it cannot be pushed around as far as trade, security and diplomacy is concerned.

Gachie is a former Foreign Affairs editor at the Nation and expert on Horn of Africa affairs.

“Kenya courts Somaliland to remind Somalia that it can do without it. This is a high political chess game. So, Kenya seeks to simply show Somalia that you can server diplomatic ties with us but that will not stop us from securing our interest, because at the end of the game it's about economic, political and social interest,” he says.

Kenya might also be looking for alternative market for its miraa in March as efforts to curb the spread of coronavirus. The issue has, however, been blamed on the poor relations between the two states.

“Kenya wants Somaliland to also give it a share of that market so that Kenyan miraa can be exported there too,” Hassan notes.

Somalia said Bihi's visit must be treated with contempt it deserved.
News
1 year ago

Somalia on Monday announced it had cut its diplomatic ties with Kenya.
News
1 year ago

Kenya dismisses claim it is interfering with Somalia affairs

Nairobi says the claims by Somalia are nothing but unsubstantiated allegations.
News
1 year ago

The Kenya-Somalia Maritime dispute through 2019