Our cooperation is about action and results.

• China-Africa friendship was born in the formidable years of national liberation and is deeply rooted in our peoples' heart.

•  Our cooperation and mutual assistance in the fight against Covid-19 represents a prime example of solidarity in the face of a disease. 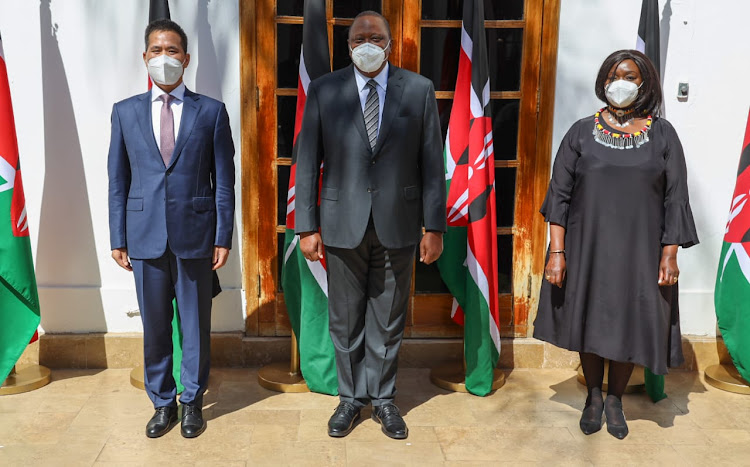 I was kind of disappointed somehow, frankly, upon my first-ever arrival at JKIA on August 29, 2008. A very friendly and hospitable airport. But, wasn’t its size too modest for a regional hub, a favourite destination for tourists worldwide?  I wondered.

My disappointment proved short-lived. In the following three years, I enjoyed my frequent visits to JKIA each and every time. As the Deputy Chief of Mission, I was there on a monthly basis meeting and seeing off delegations. I departed from the familiar JKIA in late July of 2011 to return on August 31, 2020.

I arrived at JKIA once more, flying Kenya Airways from Guangzhou. Imagine my excitement to serve my country for a second time in a great nation that I always proudly refer to as my second home!

While sharing my excitement with Ambassador Samuel Gitonga who was there to meet me, I was very impressed by the big change at the airport. Expanded. Upgraded. With the same old hospitality. “Wow, Nairobi is better positioned to be a commercial and services hub for the region,” I said to myself.

Development first. It is development that holds the key to a better life for the people. All countries are entitled to development and progress, a right the Chinese and Kenyan peoples are exercising in our abiding pursuit of the Chinese dream and the Kenyan aspirations with our own efforts and through international cooperation.

Can any country achieve desired development without requisite infrastructure? Not China, I know. Be it air-road, water-road, highroad, railroad, digital-road, or other roads, in China we often say, “to build fortune, roads should be built first.” And as I understand, infrastructure is topmost on the list of the foundations for socio-economic transformation, according to Kenya's Vision 2030.

One brochure in my office, Kenya’s Industrial Transformation Programme, published in July 2015, is fresh to me.

“The key to sustainable industrial growth and job creation lies in the growth of domestic companies and the attraction of local and foreign investors to invest capital and expertise into the economy,” writes President Uhuru Kenyatta in his message.

“We recognise the role that the government will need to play in creating the infrastructure backbone to advance our economy,” the President notes.

An exciting time for Kenya indeed. As an old friend of Kenya, I am more than happy to learn that Kenya has been making steady and significant progress in every undertaking for national development in recent years. I am all too glad to learn that not a negligible number of development projects in Kenya are in one way or another in partnership with China.

President Kenyatta mentioned in the above message the construction of the standard gauge railway, the development of Lapsset, the generation of additional electricity, the construction of new roads, and not surprisingly, the upgrading of  JKIA. I am proud that China proves to be a most reliable partner of Kenya in all these development endeavours. As a matter of fact, infrastructure connectivity is part and parcel of the eight major initiatives of the 2018 Focac Beijing Summit.

This year marks the 20th anniversary of the founding of Focac, the Forum on China-Africa Cooperation. On October 12, President Xi Jinping of China and President Macky Sall of Senegal, the African co-chair of Focac, issued a joint congratulatory message to mark this important occasion.

The past 20 years have witnessed impressive achievements in China-Africa cooperation. In 2019, direct Chinese investment stock in Africa topped $49.1 billion, up by nearly 100 times from 2000.

China-Africa trade reached $208.7 billion, 20 times the size of 2000. China has been Africa's largest trading partner for 11 years in a row, and has contributed more than 20 per cent to Africa's growth for a number of years.

Many flagship projects, including the African Union Conference Centre and the Mombasa-Nairobi railway have been completed and put into good use. Cooperation in other fields, from science, education, culture, health, to people-to-people exchange, peace and security, is also making significant headway.

The fruitful and wide-ranging cooperation between China and Kenya is a vivid epitome of and stands out in China-African cooperation. The China-Kenya relationship, already upgraded twice in recent years, is in its best shape.

The past 20 years have been a journey of overcoming challenges and enhancing partnerships. Focac has withstood the test of the volatile international landscape, and scored historic achievements for some good reasons. It is also a source of inspiration for the growth of China-Africa relations, as Chinese State Councillor and Foreign Minister Wang Yi points out in his recent article commemorating the 20th anniversary of Focac.

We have always pursued solidarity, consultation and cooperation as equals. Focac, composed of China and 53 African countries and the AU, is by no means "one vs 54", but "54 plus one".

China never interferes in African countries' pursuit of development paths that suit their own national conditions, never imposes its will upon others, never attaches any political strings to its assistance, and never seeks selfish political gains in investment and financing cooperation.

We have always advanced win-win cooperation for development. The Chinese and African peoples are entitled to live a better life. Cooperation and development have always been Focac's top priority. Our cooperation is about action and results. We always deliver and we do not make empty promises. It is a cooperation mechanism that truly delivers.

We have always supported each other in trying times. China-Africa friendship was born in the formidable years of national liberation and is deeply rooted in our peoples' heart. Our cooperation and mutual assistance in the fight against Covid-19 represents a prime example of solidarity in the face of a disease. What we have gone through together shows China and Africa are more than just partners. We are comrades-in-arms.

We have always embraced openness and inclusiveness. A closed-door policy or exclusiveness is never an option. China welcomes the concerted efforts made by the international community to support Africa in achieving peace, stability and development. Colonial plunder and the Cold-War rivalry brought excruciating sufferings to the African people. That part of history must not be repeated. Africa must never again be an arena for major-power rivalry. This belief is widely shared by people across Africa, and should be respected by the entire international community.

China has always viewed and developed its ties with Kenya from a strategic and long-term perspective. China will work with Kenya to take forward Belt and Road cooperation and the implementation of the outcomes of the Focac Beijing Summit and the Extraordinary China-Africa Summit on Solidarity against Covid-19.

In that context, we will strive for new progress in the China-Kenya comprehensive strategic and cooperative partnership and deliver greater benefits to the people of both countries.

Zhou Pingjian is ambassador of China to Kenya

Post a comment
WATCH: The latest videos from the Star
by ZHOU PINGJIAN
Siasa
25 October 2020 - 07:12
Read The E-Paper