Money has killed our universities

Ideal universities usually have to spend huge resources in research, staff development and scholarships without any assurance of returns or profit.

• Universities belong to ethnic groups and each community is lobbying for one.

• The consequence is that university priorities are upside down. 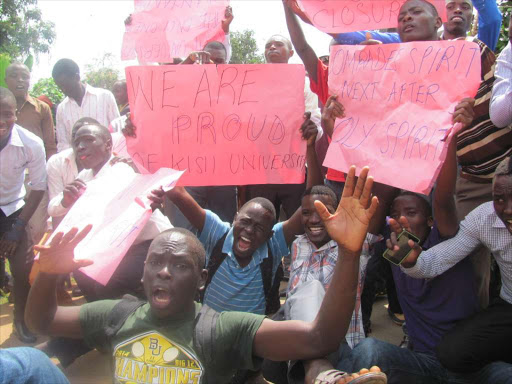 Kisii University students during a past demonstration over an order by the Commission for University Education to close 10 of its campuses, January 25, 2016
Image: BENSON NYAGESIBA

On 11 September, Katiba Institute and Kituo Cha Katiba (based in Kampala) organised a webinar on the role academics in the East African region could play in promoting presidential term limits.

Together with Patricia Atim, Wandia Njoya and Karuti Kanyinga, I sat as a panelist to facilitate this great discussion.

The organisers of the webinar had proceeded from the sound assumption that academics have an important role to play in fostering good governance. Indeed, academics have the rare privilege of having the skills for knowledge generation and the platforms for propagating their ideas. Therefore, the expectation that those in fields such as the humanities and social sciences should speak for the downtrodden and against the ills of those in positions of authority, without fear or favour, is a moderate one.

But the webinar quickly accentuated that our academics are limping — at best — making it almost pointless to attempt a discussion of their role in promoting good governance. The webinar established that academics in the East African region face serious limitations to their capacity to deliver on their mandate and the freedom to research and express themselves freely. As a result, their power to seek knowledge is hampered and the freedom to speak truth to power reduced severely.

WHAT THE CONSTITUTION SAYS

The people of Kenya foresaw this problem during the constitutional deliberations. Ultimately, they passed Article 33(1) of 2010 Constitution, which guarantees the right to freedom of expression.

This provision defines the right to freedom of expression broadly to include the (a) freedom to seek, receive or impart information or ideas; (b) freedom of artistic creativity; and (c) academic freedom and freedom of scientific research.

Additionally, Section 29(2) of the Universities Act (No 42 of 2012) entitles an academic to the freedom to question and test received wisdom, to put forward new ideas and to state opinions. This empowerment of academics ideally disempowers university administrators and even governments in the sense that they lose the capacity to disadvantage, or treat less favourably, academics whose ideas they dislike.

However, matters are very different on the Kenyan ground. First, very little research happens in our universities. Second, the few novel ideas that arise traumatise most university administrators/sponsors/government and their natural reaction is often to fight the inventors.

A decade after the quite protective 2010 Constitution, the few active academics are derided for doing their job — of expressing uncomfortable opinions and delivering unsettling research findings. This is the case because the foundations of our universities remain diametrically opposed to their traditional objectives.

The typical functions of a university are; i) research, ii) its dissemination through publications, teaching etc and iii) community service. New knowledge is only possible through research. But the research process is often controversial, and usually entails questioning entrenched traditions, testing prevailing knowledge and challenging widely-held assumptions.

Research is expensive in terms of money, time and even inconvenience. That is why academics require funding, ‘sacred’ time in terms of less teaching load and the freedom of expression to be productive.

It is also the role of academics to disseminate their research findings through publications, teaching, and community training, among others. Research dissemination consumes money and time, especially when books or journals have to be published. Again, academics and their often unsettling ideas require to be tolerated as they perform this mandate.

Universities are also required to be useful to communities directly. For instance, a law school may serve the community through legal aid and volunteering to represent communities through public interest litigation etc.

The drama of our immoral national politics has a special theatre in public universities. Looting university administrators and their collaborators in government continue to have easy access to public university coffers, and ethnic considerations outshine merit in staffing. Universities belong to ethnic groups and each community is lobbying for one. The consequence is that university priorities are upside down.

A genuine academic pursuing knowledge in a public university appears misplaced because research and the aims of knowledge-generation are not part of their employer’s (or even sponsor’s) agenda. It is more strategic to (corruptly) purchase an overpriced building in the city (for tutoring privately sponsored students) than to fund academic research.

Privately sponsored programmes remain the greatest income-generation innovation university administrators have mooted since independence – and it implies heavy teaching loads in the place of research. Meanwhile, even the meagre government capitation is usually late and has been dwindling with time. Without much research and knowledge-generation, abuse of academic freedom is limited to muzzling dissenting political or even ethnic voices. Woe betide you if your opinion contradicts the wishes of the reigning communities!

Most religion-sponsored universities are difficult to explain except as businesses that also double up as forums for evangelism. Nearly all of them are a contradiction of sorts. On the one hand, they claim to stand for the usual objectives of university education including support for research. On the other, their religious sponsors affirm that there are certain settled matters that are beyond academics and their curiosity.

The areas where research is considered out of bounds include — for law academics — the legality of sexual minority rights and abortion and — for medical academics — cloning and reproductive health (especially research in family planning methods).

An academic employed by a religion-sponsored university must keep off such controversial areas or perish. The disturbing question is why start a university when you have answers to the questions already?

And then we have private universities. Most of them do not pretend to have any other motive other than profit. The tragedy with the profit model is that it is ill-suited for university education. Ideal universities usually have to spend huge resources in research, staff development and scholarships without any assurance of returns or profit. In addition, functions such as community service are purely for public interest and stand to run counter to profit-oriented objectives.

Although I have stated that there are three categories of universities, profit or money maybe the overarching objective of all Kenyan universities. And it is in the name of money that those who curtail academic freedom swear.

Money has killed research and reduced our universities to stone and mortar classrooms where the academic is a mere vessel for reading out the ideas of western researchers to an uninterested audience keen only on passing exams by whatever means and carrying home a degree certificate. In this sense, our universities are glorified high schools.

Money has promoted students to the hallowed status of clients. The important clients of our universities cannot fail exams, cannot be punished when they err, and have to graduate in record time regardless of their performance.

Money has reduced the highly qualified academic with five postgraduate degrees to a mere servant at the mercy of their clients, whose evaluation is more important than the wisdom at stake.

Money has killed conferences, research and publication because these are neither ‘essential university services’ nor profitable.

Money requires the academic to mind what they say lest the sponsors or the corrupt and insecure administrators send them packing.

Money requires that the ‘sensible’ academic shelves their individual research agenda for whatever is offered by the western grant-makers.

Money has pre-occupied our academics to the extent that they have no time left to speak for society.

“Money has killed our universities.” What an epitaph!

The author is a law academic and consultant