• President Mohamed Farmaajo and the federal state leaders have in the last one year been engaged in talks on the how and when to hold the elections.

•  A senior European diplomat who is accredited to Somalia on Wednesday told the Star “while it is not really an election, at least it is something”. 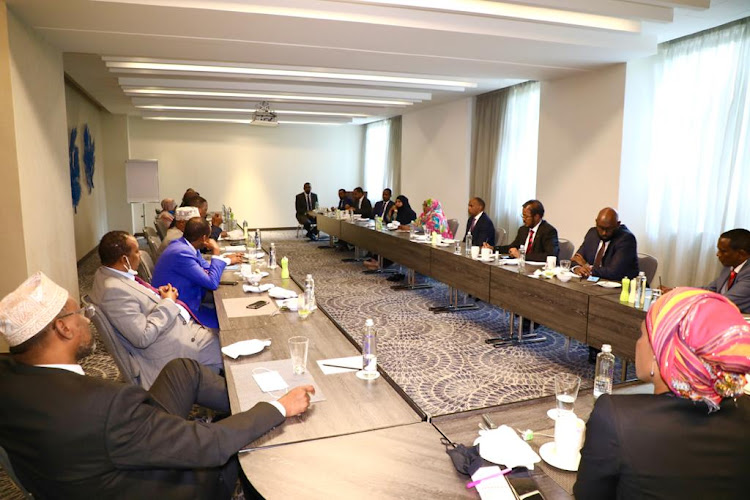 Somalia is preparing for the first one-person-one-vote election since 1969, whose resulting government did not last the year. The preparations have been intriguing and so will the campaigns be.

President Mohamed Farmaajo and the federal state leaders have in the last year been engaged in talks on the how and when to hold the elections.

They have now reached an agreement on the dates of the parliamentary and presidential elections. The federal state leaders and President Farmaajo on October 1 in Mogadishu agreed on the election timelines and the formation of a new electoral commission.

The election of the Upper House of Parliament will be between October 15 and November 25, while the members of the Lower House will be voted in between November 15 and January 15. The presidential election will be on February 8, 2021.

A senior European diplomat who is accredited to Somalia on Wednesday told the Star “while it is not really an election, at least it is something”.

The international community has been involved in the talks, and has invested heavily in the process.

Former Prime Minister Hassan Khaire, who was a casualty of the sensitive politics, on September 12 declared his interest in the presidency.

“After a long discussion, I would like to share with you my candidacy for the presidency of JFS. I truly understand the opportunities and challenges associated with the leadership and performance our country needs today and in the future,” he said in a statement. He is challenging his former boss, President Farmaajo.

He has started his campaigns, reaching out to supporters from the region. He was in Nairobi on Tuesday, where he met Kenyan legislators from Northeastern.

“I am honoured to have a consultative meeting with Somali parliamentarians and senators in Kenya today. I thank them for the good support of the Somali people,” Khaire said after the meeting.

He also said he has met with Somalis in Djibouti and President Ismail Guelleh, who he said has played a major role in rebuilding the government of Somalia.

Horn of Africa analyst Rashid Abdi said on Tuesday, “In his speech to Kenyan MPs and senators from Northeastern in Nairobi, PM Khaire asked for Kenya's support. He said relations between two nations are strategic and deeply rooted. He said there were many opportunities for economic cooperation. Nairobi seems happy with Khaire.”

There is also an interesting and controversial development. Former al Shabaab deputy leader Muktar Robow has been allowed to register a party and participate in the election.

The National Independent Electoral Commission registered six new parties, among them Peace and Justice Party led by Robow, who is under house arrest. He was blocked from running for a federal position in 2018.

So, why should Kenya be interested in the Somalia elections?

Maj Gen (Rtd) Charles Mwanzia says a lot of it has to do with the war on terrorism.

“Kenya has been fighting AS [al Shabaab] for 10 years. During this period, major attacks on Kenya took place. Elections in Somalia will bring a semblance of peace and stability, which has been elusive for many years,” he said.

Having also proposed al Shabaab be involved in elections, Mwanzia said the democratic space for the terror group, which has been calling for change of government, will give it a peaceful alternative to violent attacks.

“This will bring peace in the region. UN Resolution 2520 authorised AU member states to maintain Amisom’s 19,626 uniformed personnel, including 1,040 police personnel in Somalis to support elections till February 28, 2021. Kenya plans to withdraw KDF by end of 2021,” he said.

But an EU diplomat said although no one wants to say it openly, nothing much will change with Amisom in 2021.

Somalia not ready for one person one vote

Amisom boss caught up in Somalia politics over elections

• A senior official of the African Union Mission in Somalia warned that it is being “plagued by huge management and leadership challenges” under ...
Siasa
2 years ago

The group has not been designated or listed by US among terror groups.
Siasa
2 years ago
Post a comment
WATCH: The latest videos from the Star
by ELIUD KIBII Subeditor and writer
Siasa
18 October 2020 - 12:00
Read The E-Paper